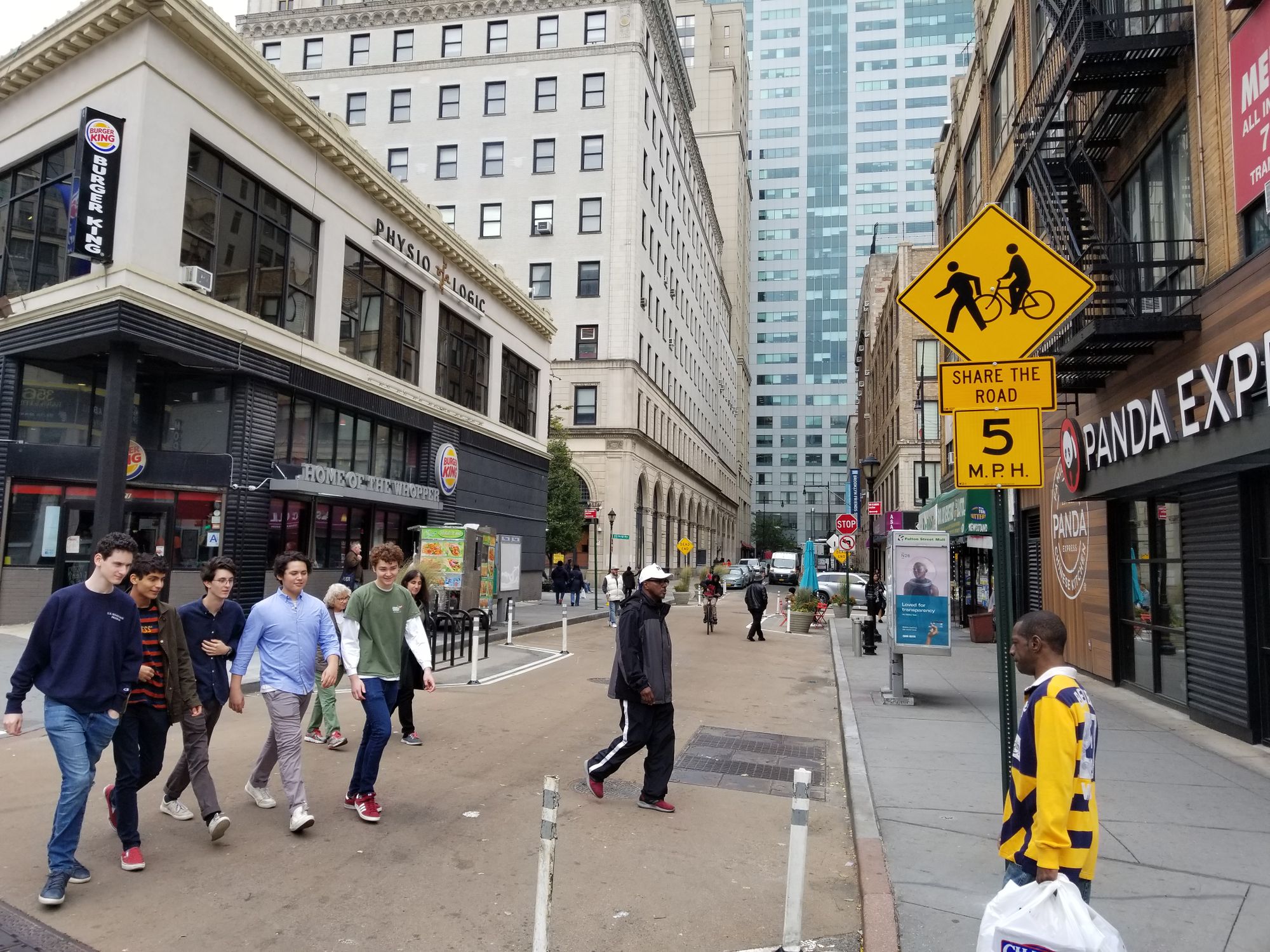 Pearl Street looking toward Willoughby Street. Ben Brachfeld/BklynerThe newly unveiled redesign of Downtown Brooklyn’s “shared street” is seen as a positive development by those who work in the area, even if the long-awaited change to part of Pearl and Willoughby Streets is somewhat underwhelming. “It’s wonderful,” said 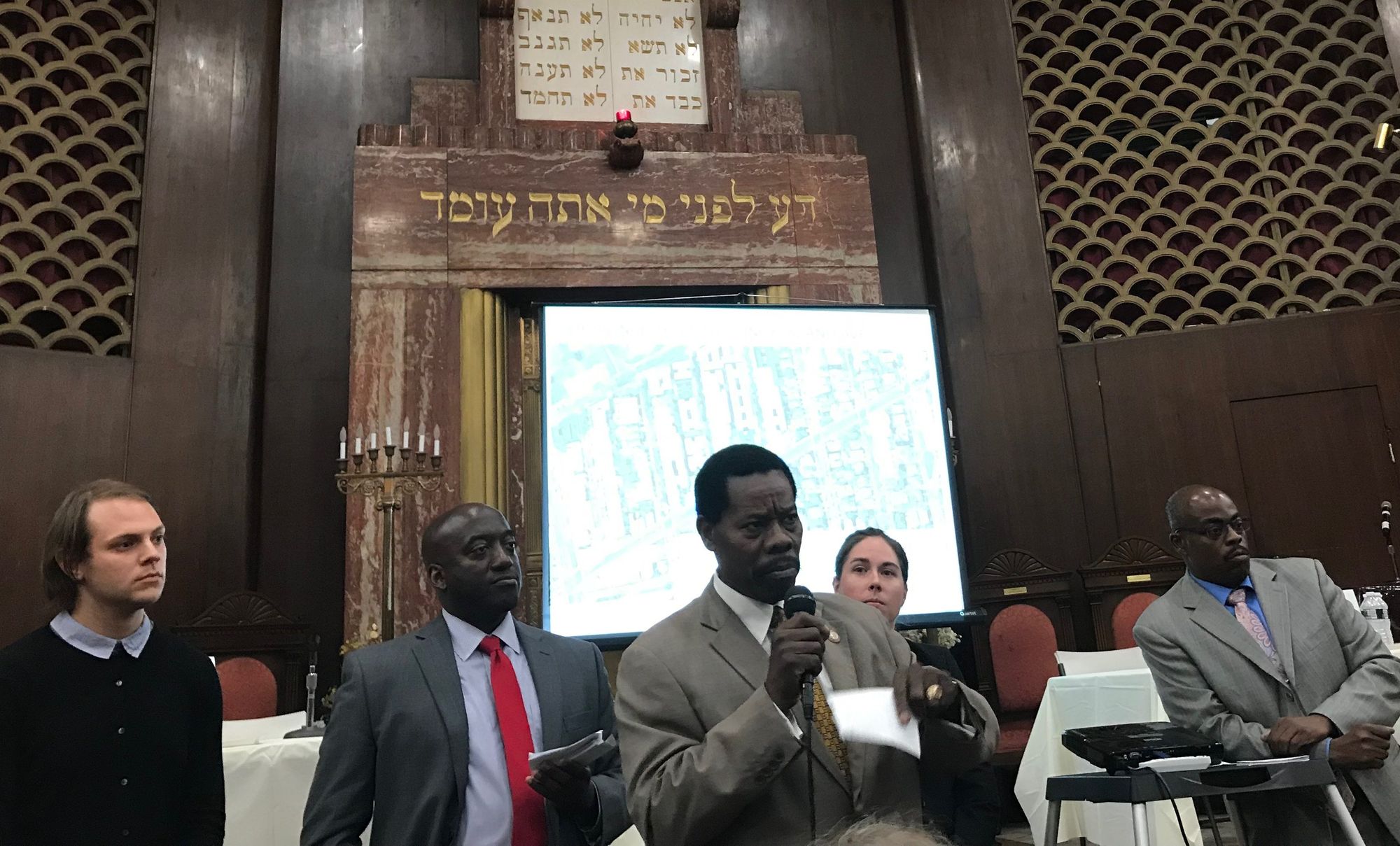 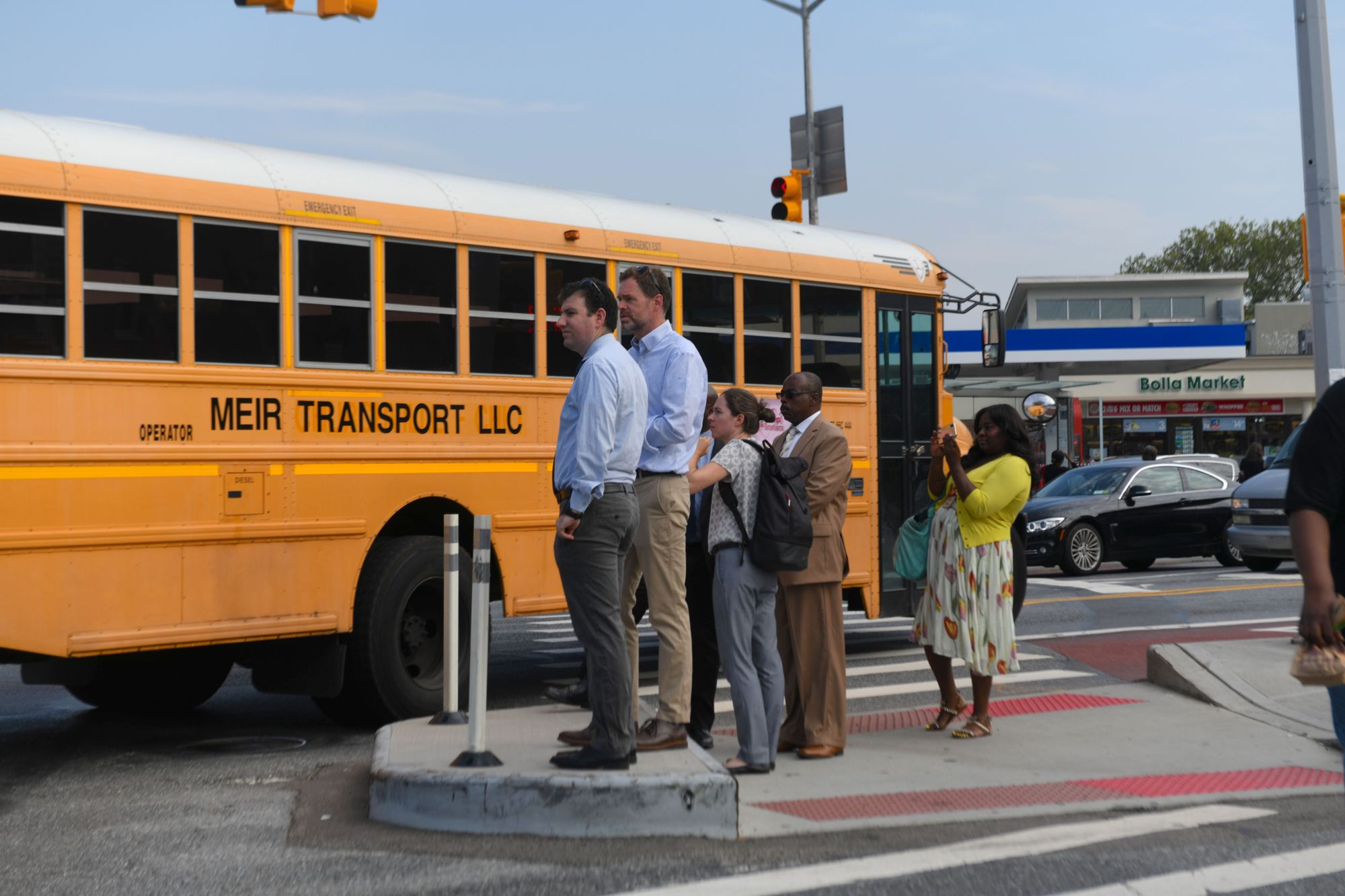 MARINE PARK – On Wednesday morning, elected officials toured the notorious Kings Highway and Nostrand Avenue intersection in Marine Park with the Department of Transportation [https://www1.nyc.gov/html/dot/html/home/home.shtml] (DOT) borough commissioner to find safety solutions for both motorists and pedestrians. Officials watch as a 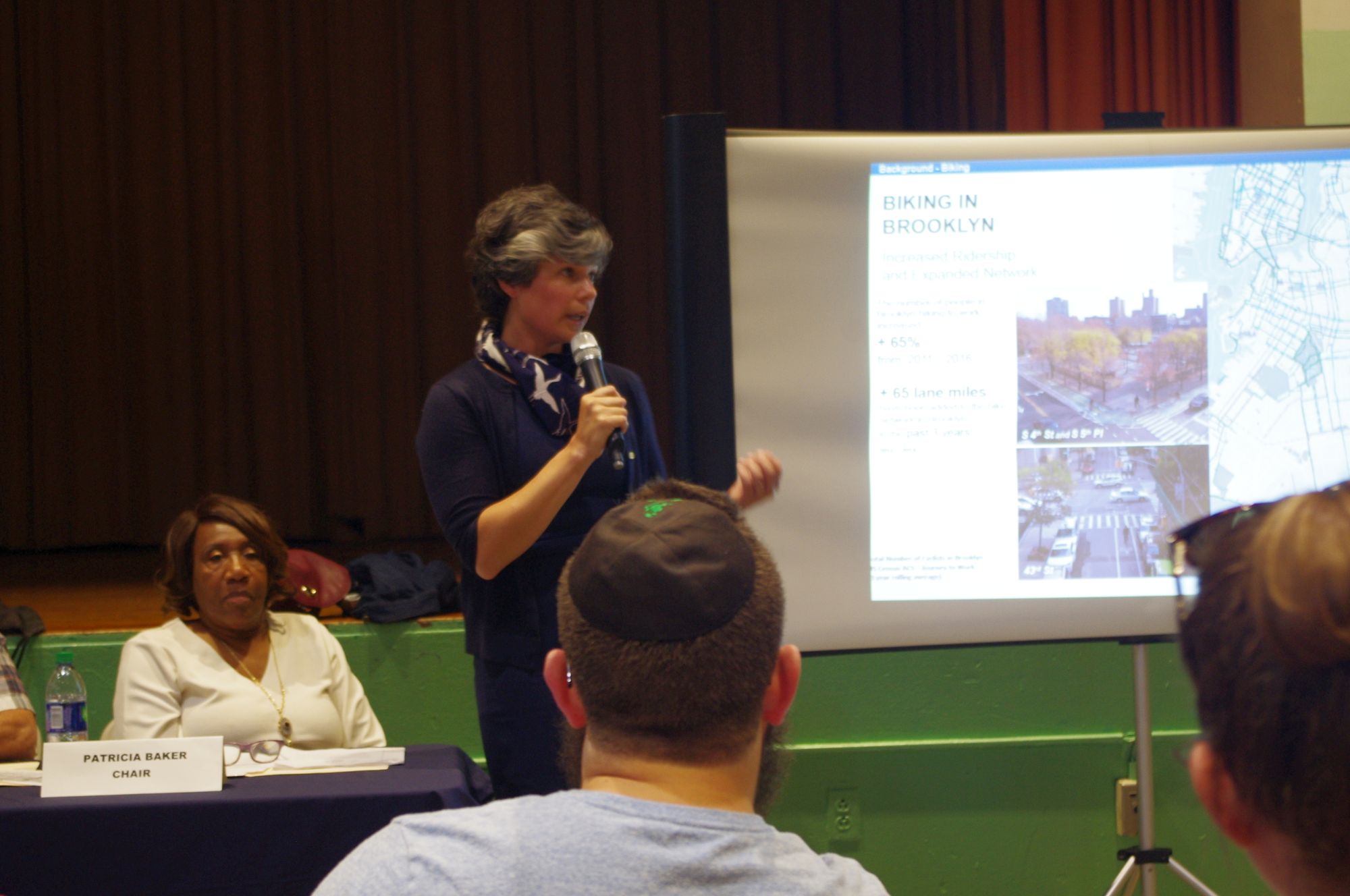 The Department of Transportation’s Acacia Dupierre explains the bike lane proposal at a Community Board 9 meeting, as the board’ chair, Patricia Baker, looks on (Image by Sam Raskin/ Bklyner)CROWN HEIGHTS — Brooklyn Community Board 9 [http://www.communitybrd9bklyn.org] gave mostly warm responses last Wednesday to a street

BATH BEACH – A three-year-old boy was crossing a marked crosswalk on his scooter. Then, a van attempting to make a right turn, ran over him, killing him. The boy’s death could have been prevented with traffic calming measures, advocates say. On April 2 at around 12:45 p.m. 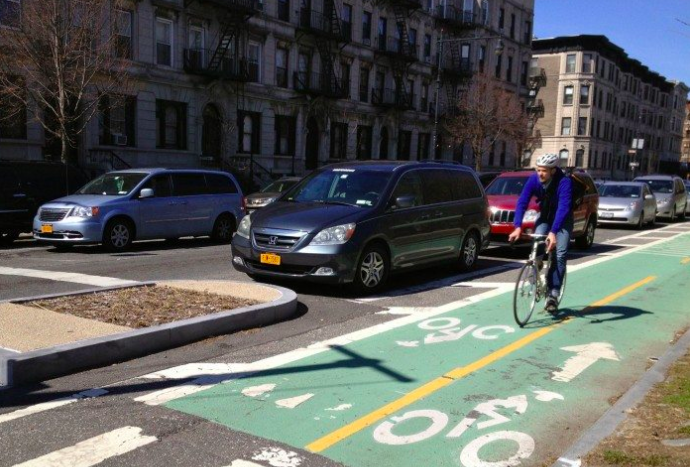 A protected bike lane in Prospect Park West. (Photo via Park Slope Stoop)Next year, local cyclists will be happy to see almost five more miles of protected bike lanes on the streets of Brooklyn. Earlier this week, the Mayor’s office announced the 2019 project as part of the 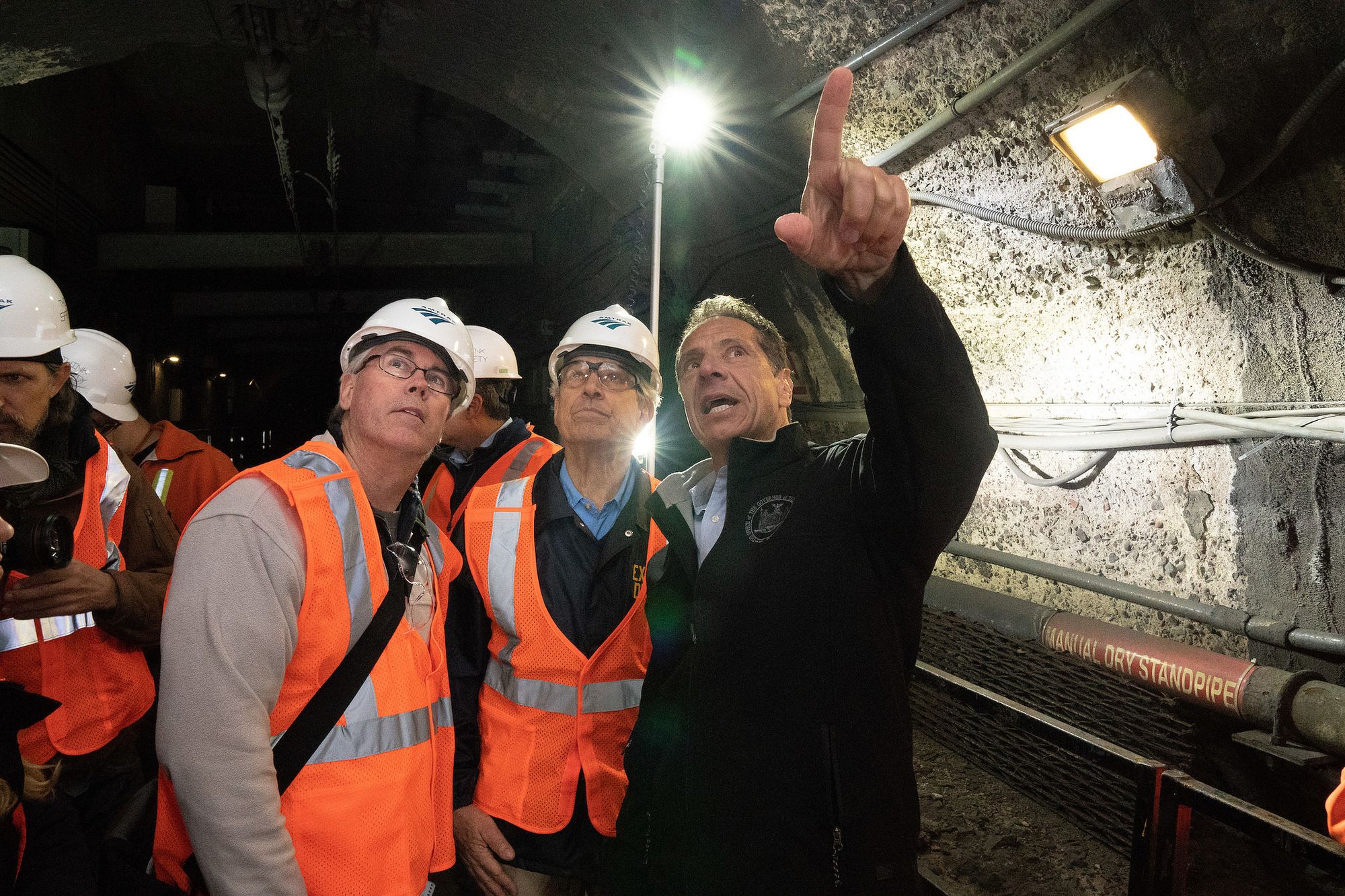 Governor Cuomo touring the Gateway Tunnel in North Bergen in October (Via NY Governor’s Office)Yesterday, Governor Cuomo announced that he’d make a midnight inspection of the L train’s Canarsie Tunnel this week in advance of the spring shutdown to make sure there’s no way to 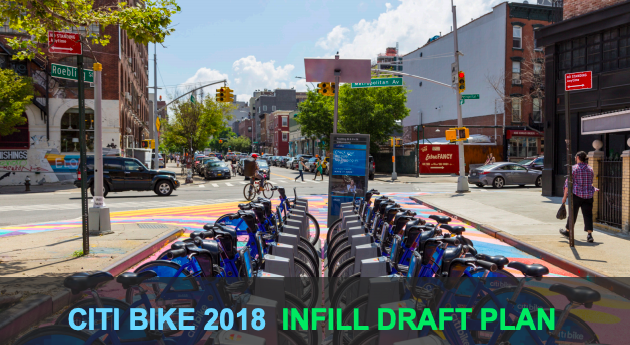 WILLIAMSBURG – More Citi Bikes are coming to Williamsburg and Greenpoint ahead of the L Train Shutdown this winter as the NYC Department of Transportation looks to add capacity to existing bike stations across North Brooklyn. A draft of the new plan was presented to Community Board 1 in Williamsburg last 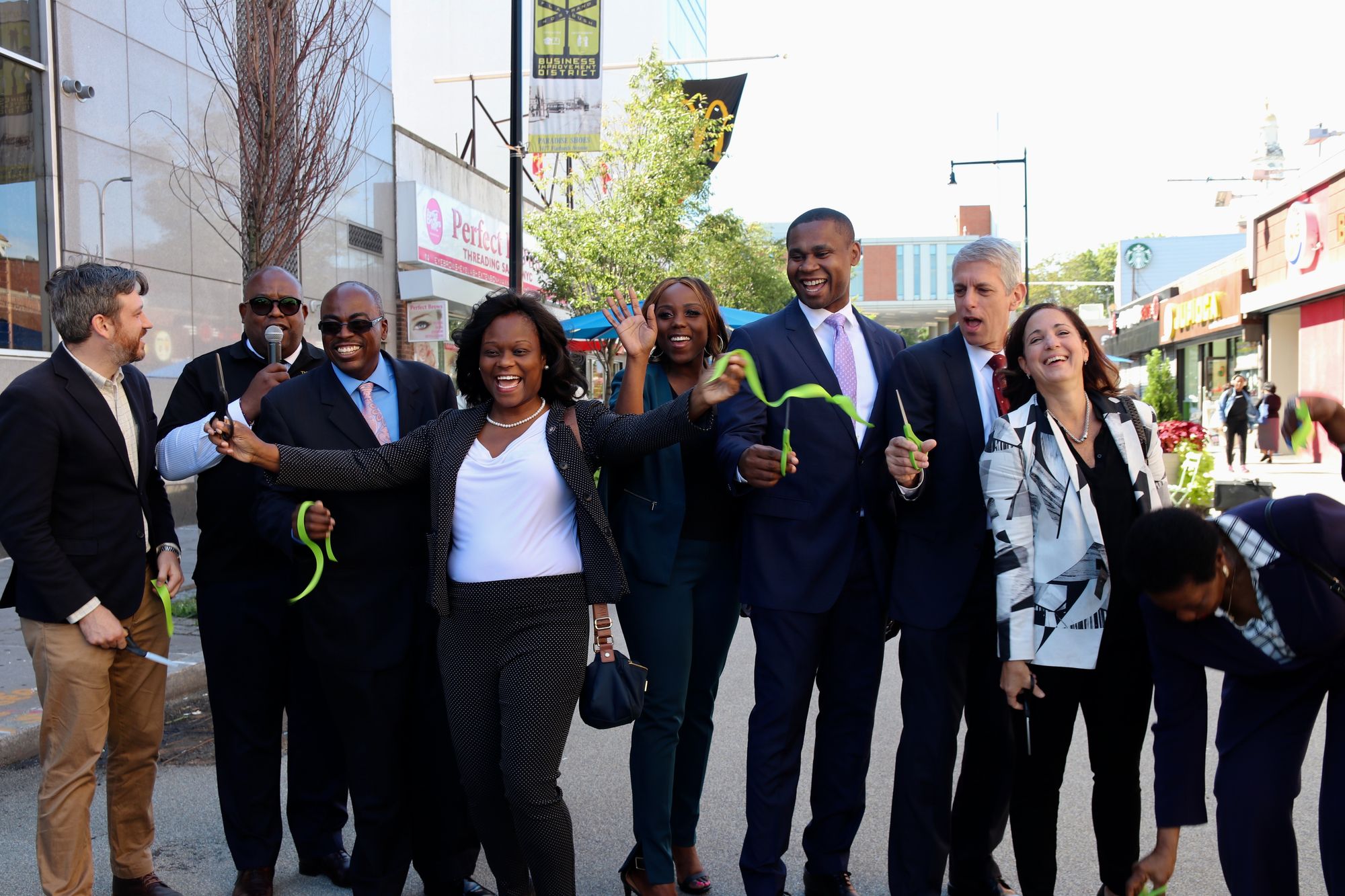 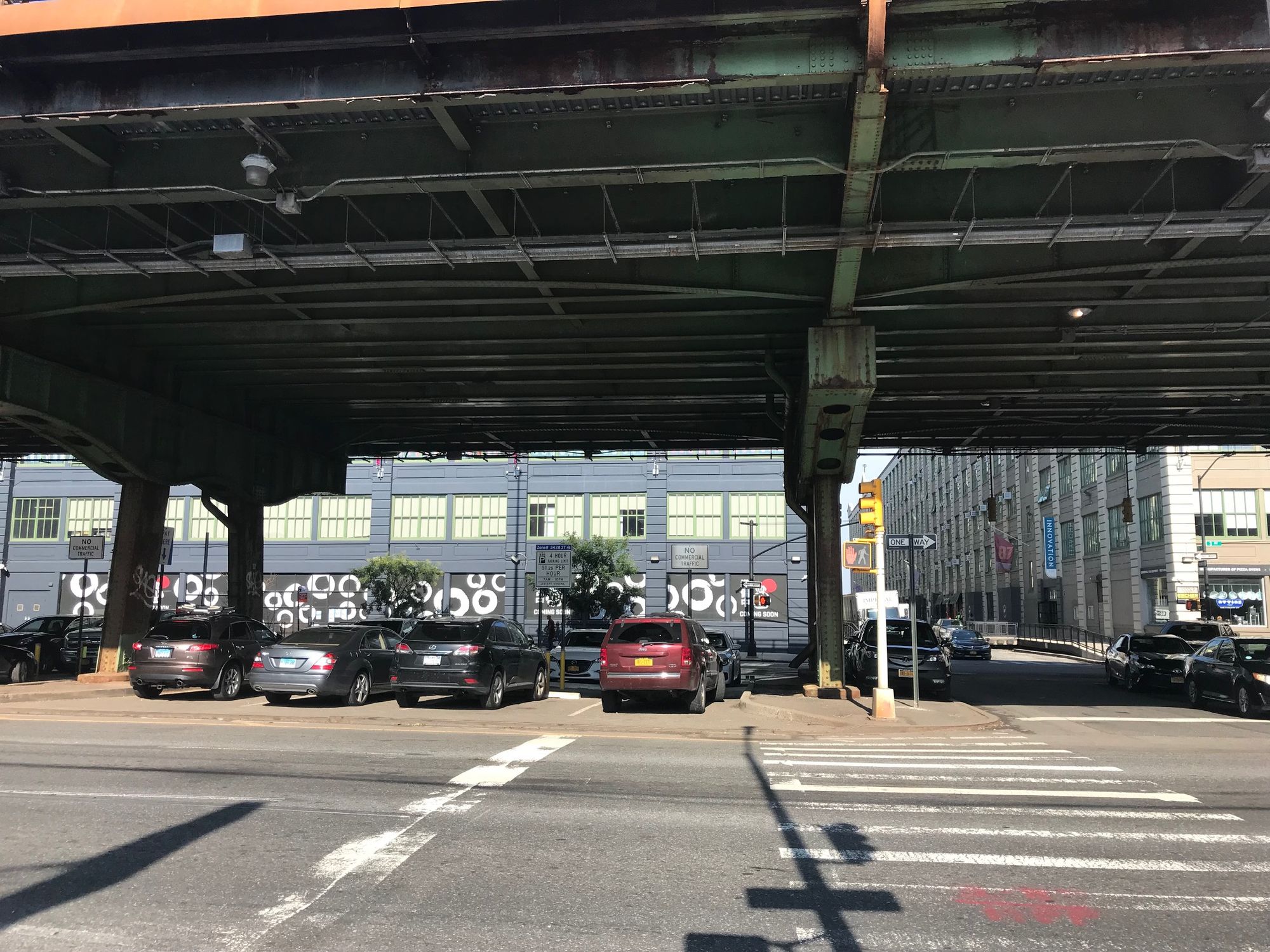 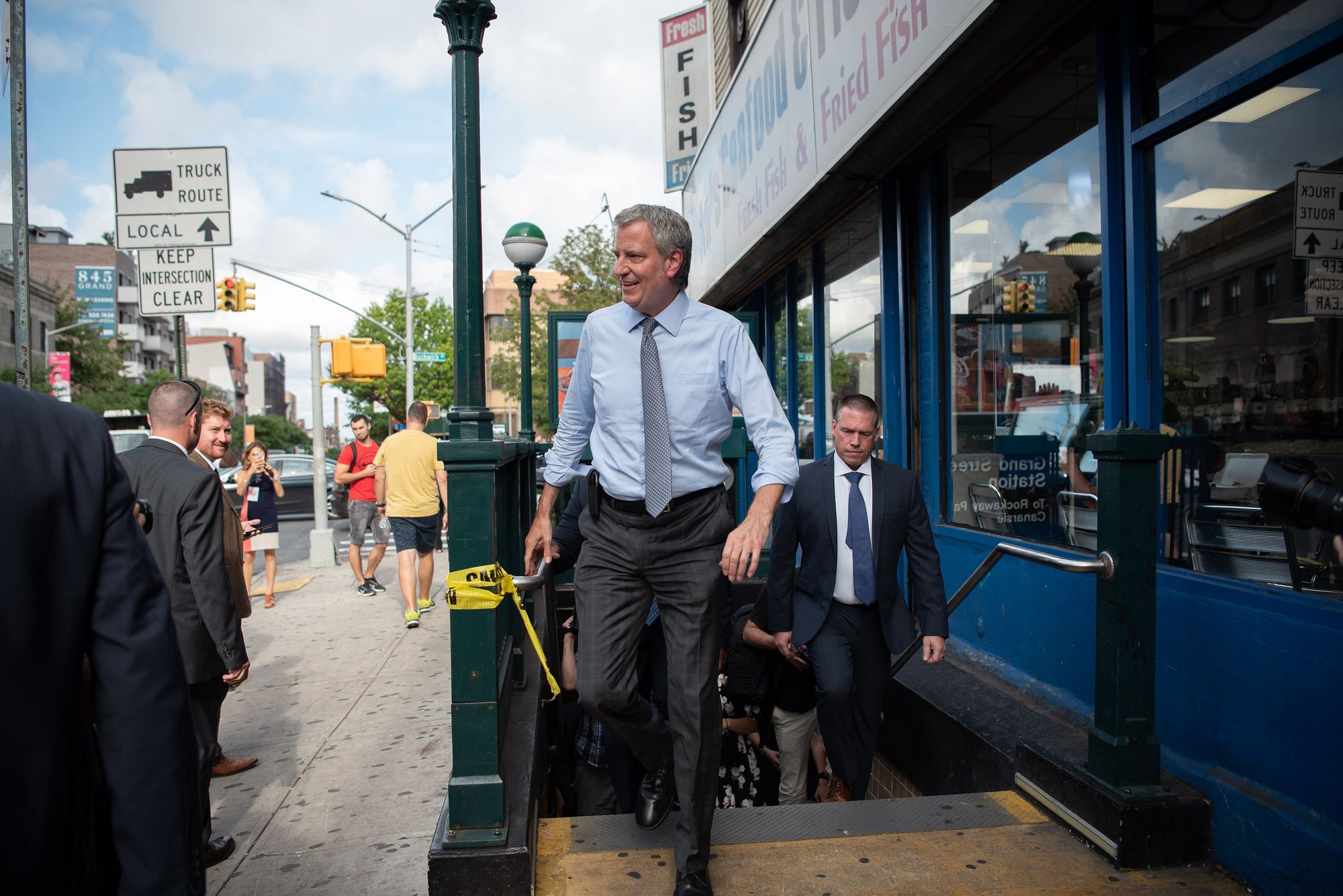 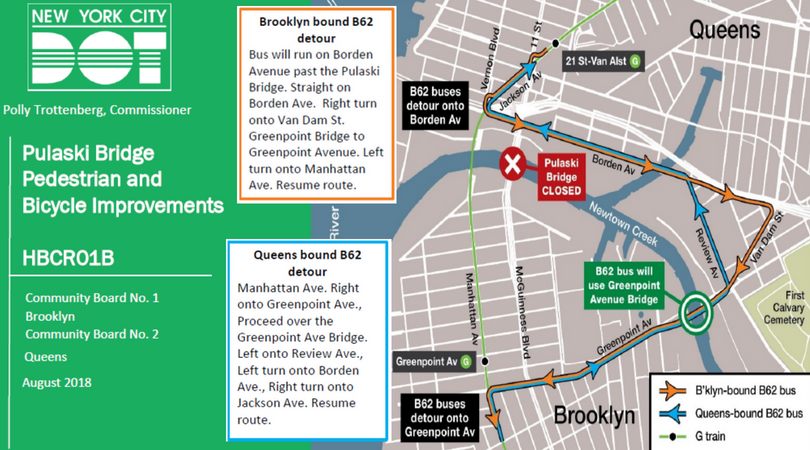 GREENPOINT – The main artery from North Brooklyn into Queens will be closed to traffic during nights between now and September. The closures are necessary for work regarding pedestrian and bike lane improvements on the bridge, according to the DOT. The bridge will be closed overnight from midnight until 5:00 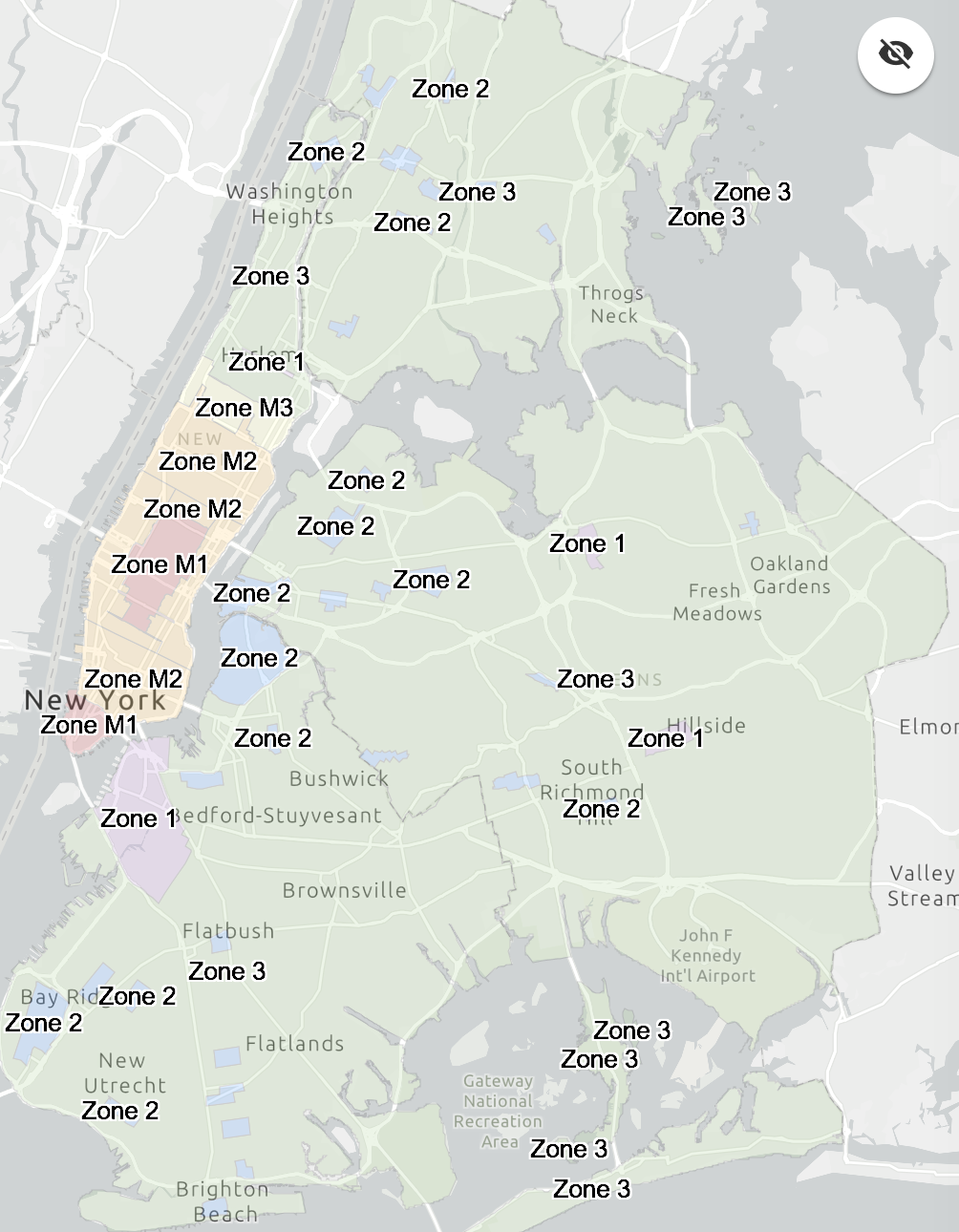 Beginning September 4, Brooklynites will see the first increase in parking meter rates in five years. Downtown Brooklyn, DUMBO, Park Slope, and Brooklyn Heights (Zone 1) will see rates double to $2.00 per hour. In Zone 2 – the light blue areas on the map – which include commercial areas of

FLATBUSH – There’s a pedestrian plaza coming to Hillel Place from Kenilworth Place to Flatbush Avenue! The plaza will be located across the new entrance of the Tow Center for the Performing Arts. [/the-hillel-gate-entrance-to-the-brooklyn-college-opens-monday/] Construction has already begun, and the roads have been closed for good and construction is expected 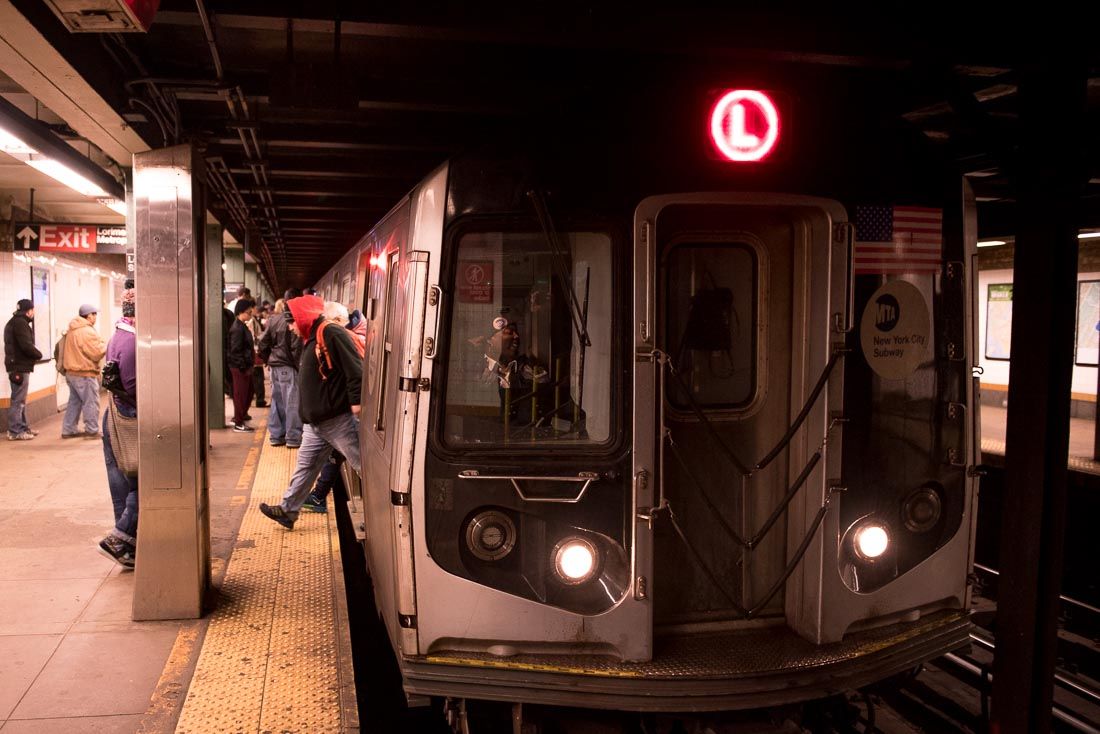 Passengers leaving the L train at Lorimer Street. About 225,000 riders take the L between Brooklyn and Manhattan each day. (Paul Stremple/BKLYNER)WILLIAMSBURG – In their ongoing efforts to reach out to residents that will be affected by the 15-month shutdown of the Canarsie Tunnel for repair, the MTA 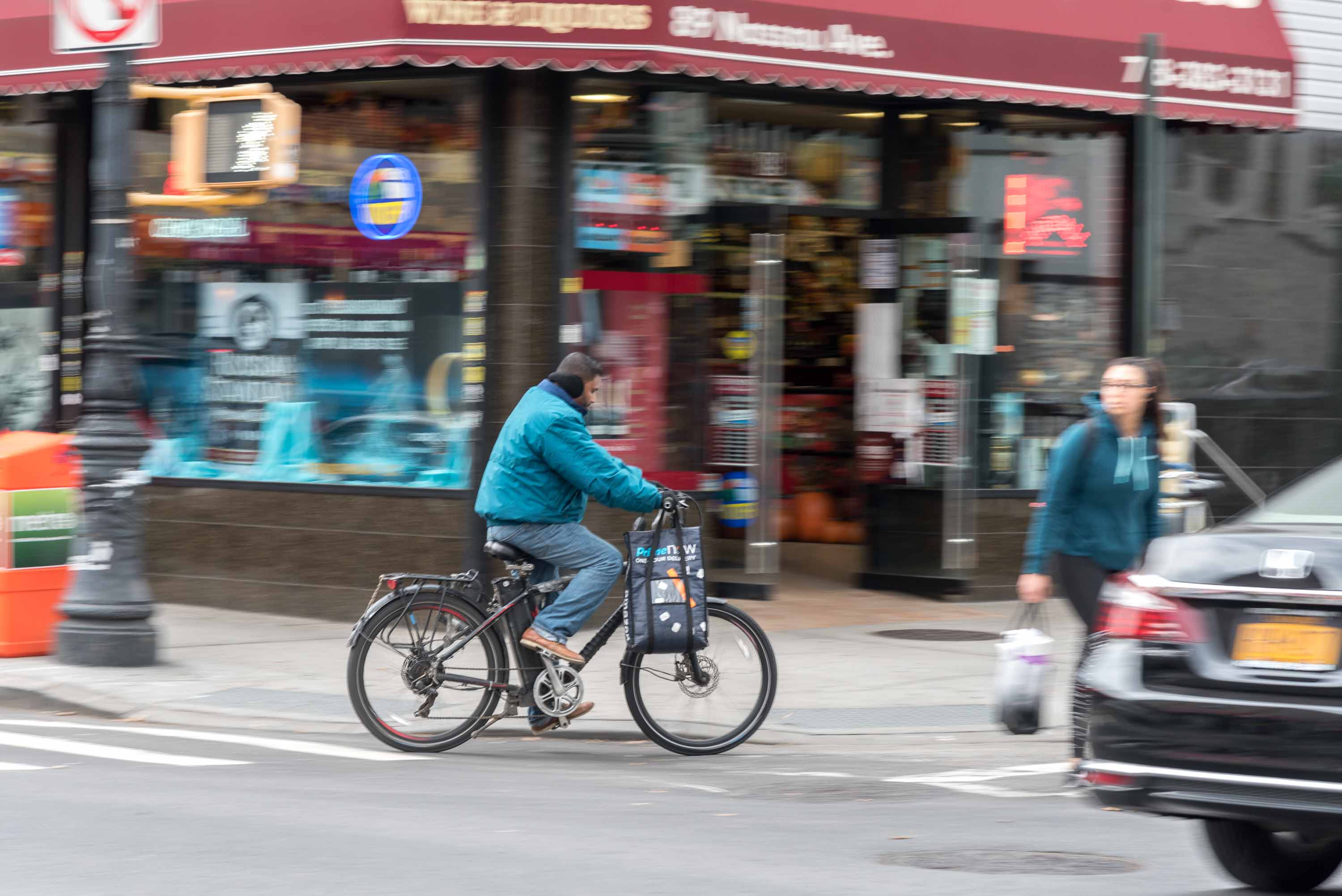 Throttle-style e-bikes will remain banned in New York, while expensive pedal assist bikes may be legalized by the DOT (Paul Stremple/BKLYNER)Last year, Mayor De Blasio announced a crackdown on e-bikes, stating that NYPD would begin issuing tickets to riders and confiscating electrically powered bikes, which have been illegal 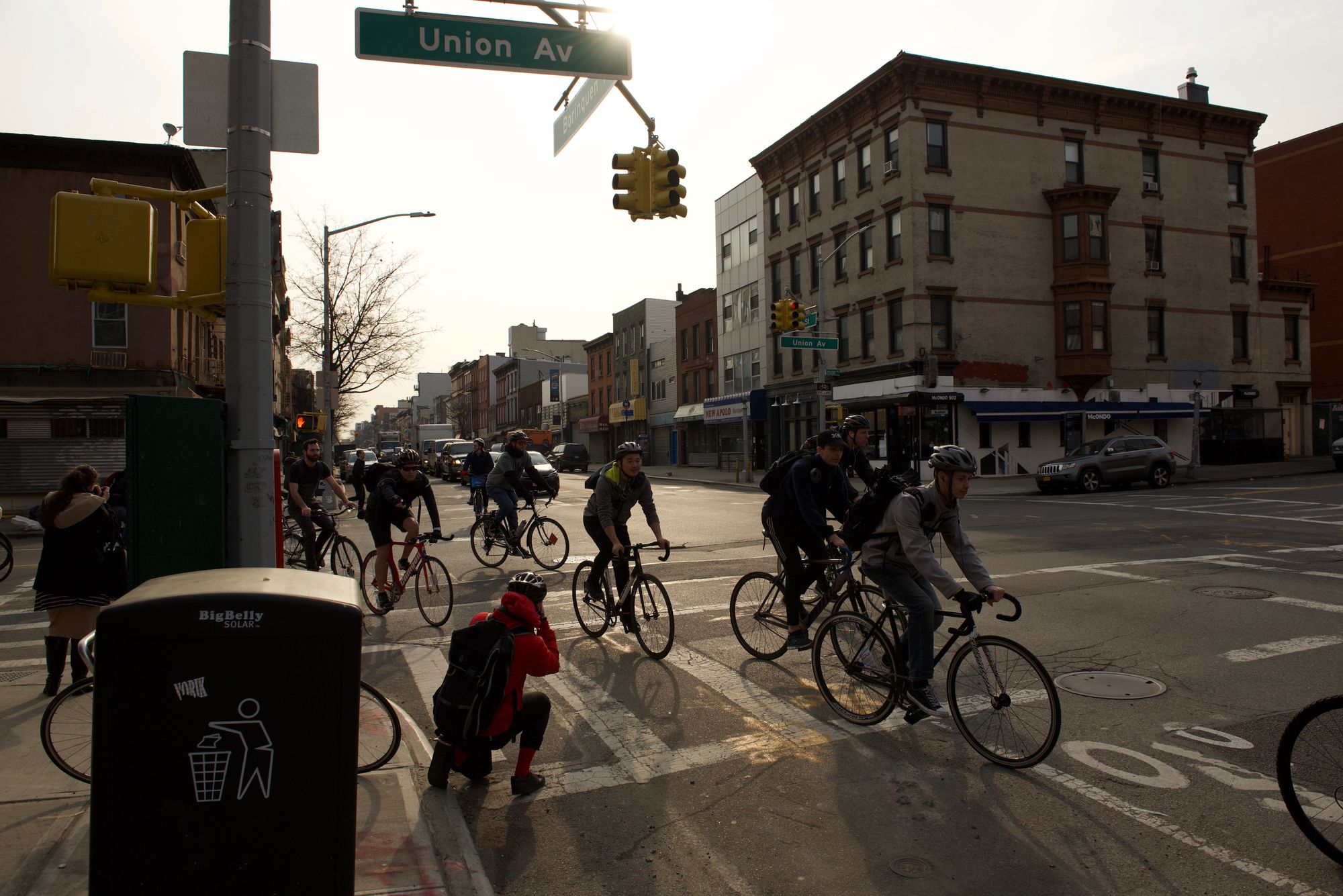 Councilmember Antonio Reynoso addresses those gathered for the inaugural “Bike Train” commute over the Williamsburg Bridge (Paul Stremple/BKLYNER)WILLIAMSBURG – At the corner of Hope and Union this morning, about 30 cyclists gathered at 8:00 am, drinking coffee and listening to music on a portable speaker before their commute. 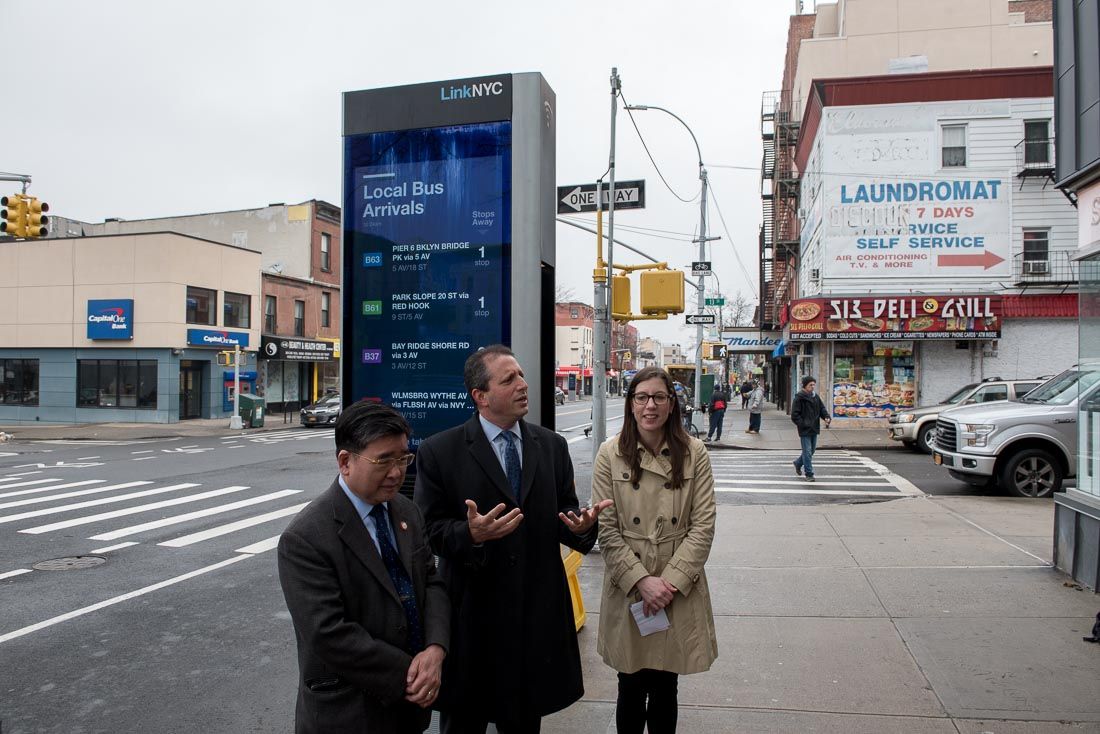 Councilmembers Brad Lander and Peter Koo with LinkNYC President Jen Hensley (Paul Stremple/BKLYNER)PARK SLOPE – At the corner of 5th Avenue and 13th Street in Park Slope this morning, the screen of the giant LinkNYC kiosk flipped back and forth between two pages: an advertisement, of course, and a 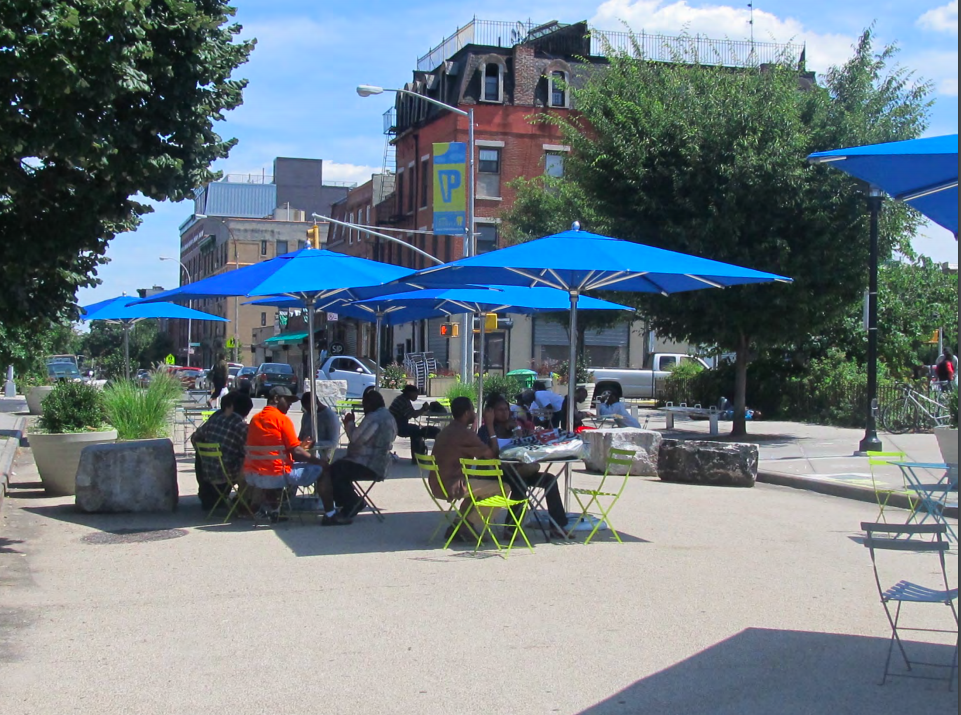 CLINTON HILL – The NYC Department of Design & Construction [http://www1.nyc.gov/site/ddc/about/about-ddc.page] (DDC) has announced that reconstruction work at Putnam Triangle Plaza will begin “on or about Monday, March 26, 2018.” Via NYC DOT and FAB Alliance presentation [http://www.nyc.gov/html/dot/downloads/ 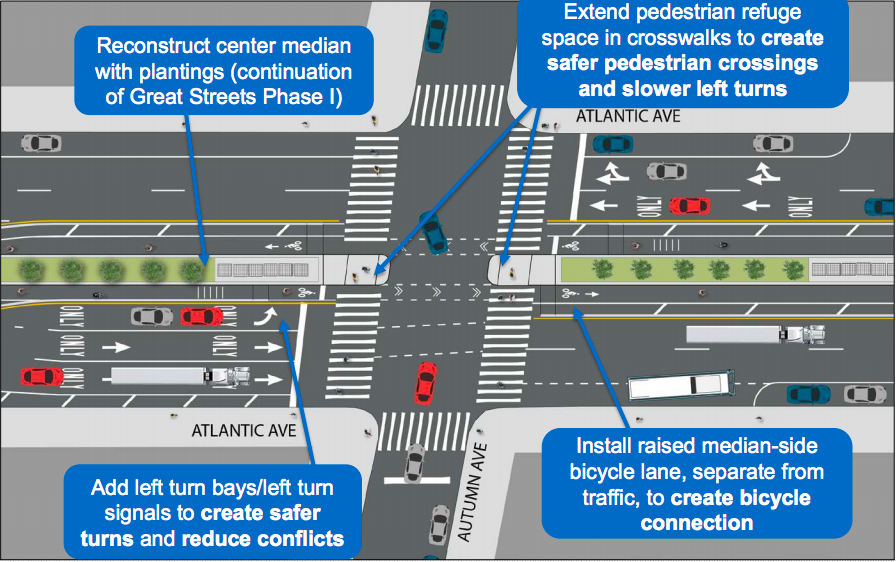 EAST NEW YORK – The DOT is planning some major safety upgrades to the far end of Atlantic Avenue in Brooklyn as part of the $250 million Vision Zero “Great Streets” program, presenting the proposed changes at a Transportation Committee meeting for CB5 in East New York last night. In an 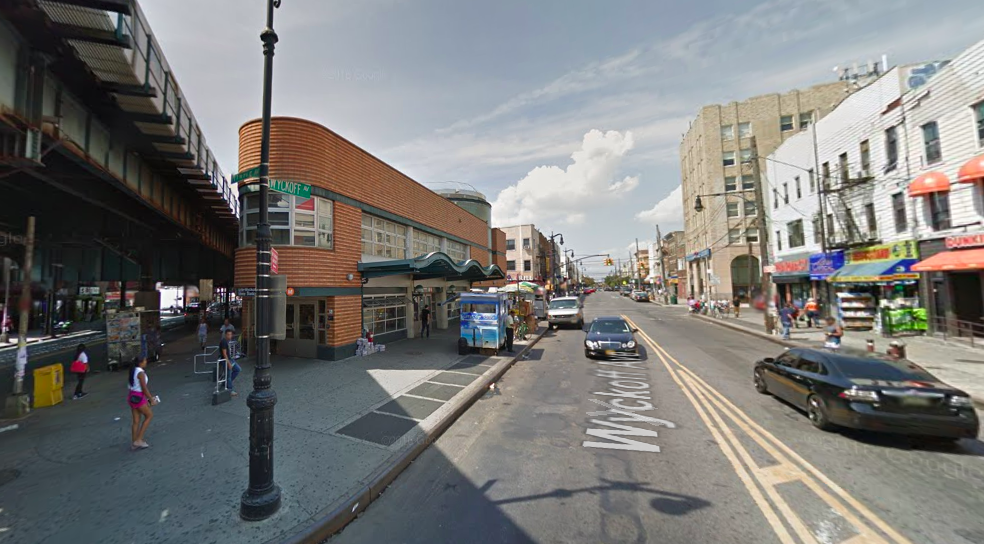 Myrtle-Wyckoff Station in Bushwick (Screenshot via Google Maps)BUSHWICK – Commuter bike parking will be coming to Myrtle-Wyckoff plaza this spring, giving Bushwick residents an opportunity to park their bikes securely, for a small fee. Further details about the pilot program were presented by a DOT spokesperson at the Community Board 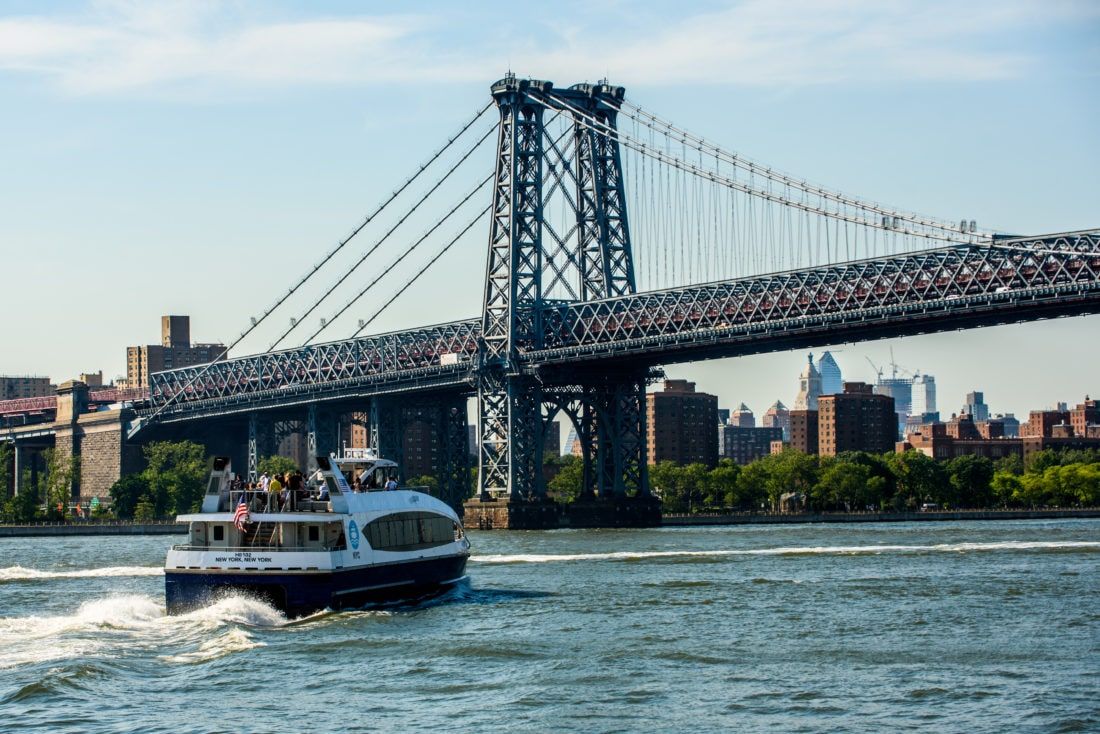 A ferry crosses in front of the Williamsburg Bridge (Photo via NYC Ferry) WILLIAMSBURG – Last night, during a joint presentation to Community Board 1 regarding the upcoming closure of the L train and repairs to the Canarsie Tunnel, the MTA and DOT revealed a host of new information, including new 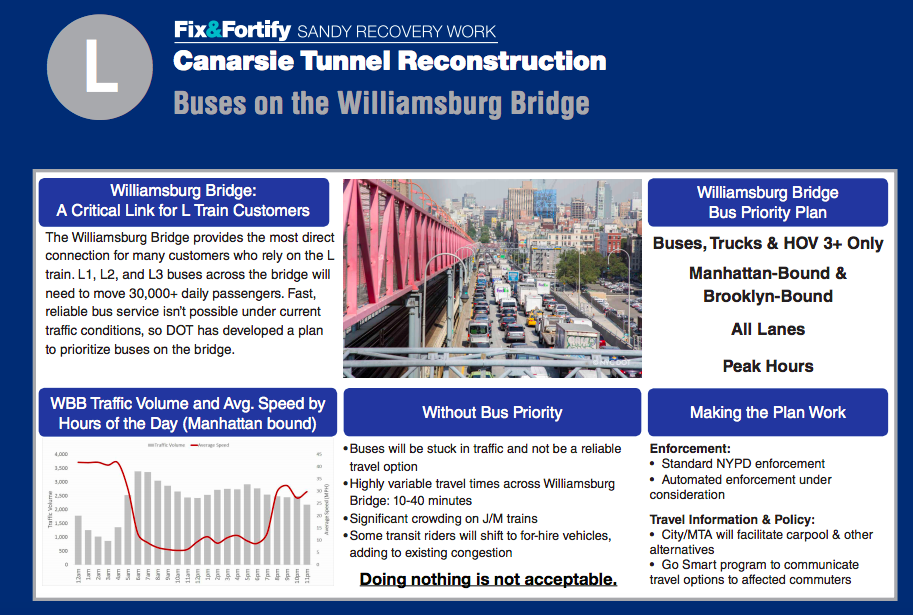 WILLIAMSBURG – Tonight, the second L Train open house [/mta-and-dot-announce-open-house-meetings-regarding-l-train-closure/] in Brooklyn will take place, an event sponsored by both the MTA and the DOT. Tonight’s meeting will be the third in a series of four (two each in Brooklyn and Manhattan) that was announced in January so the two 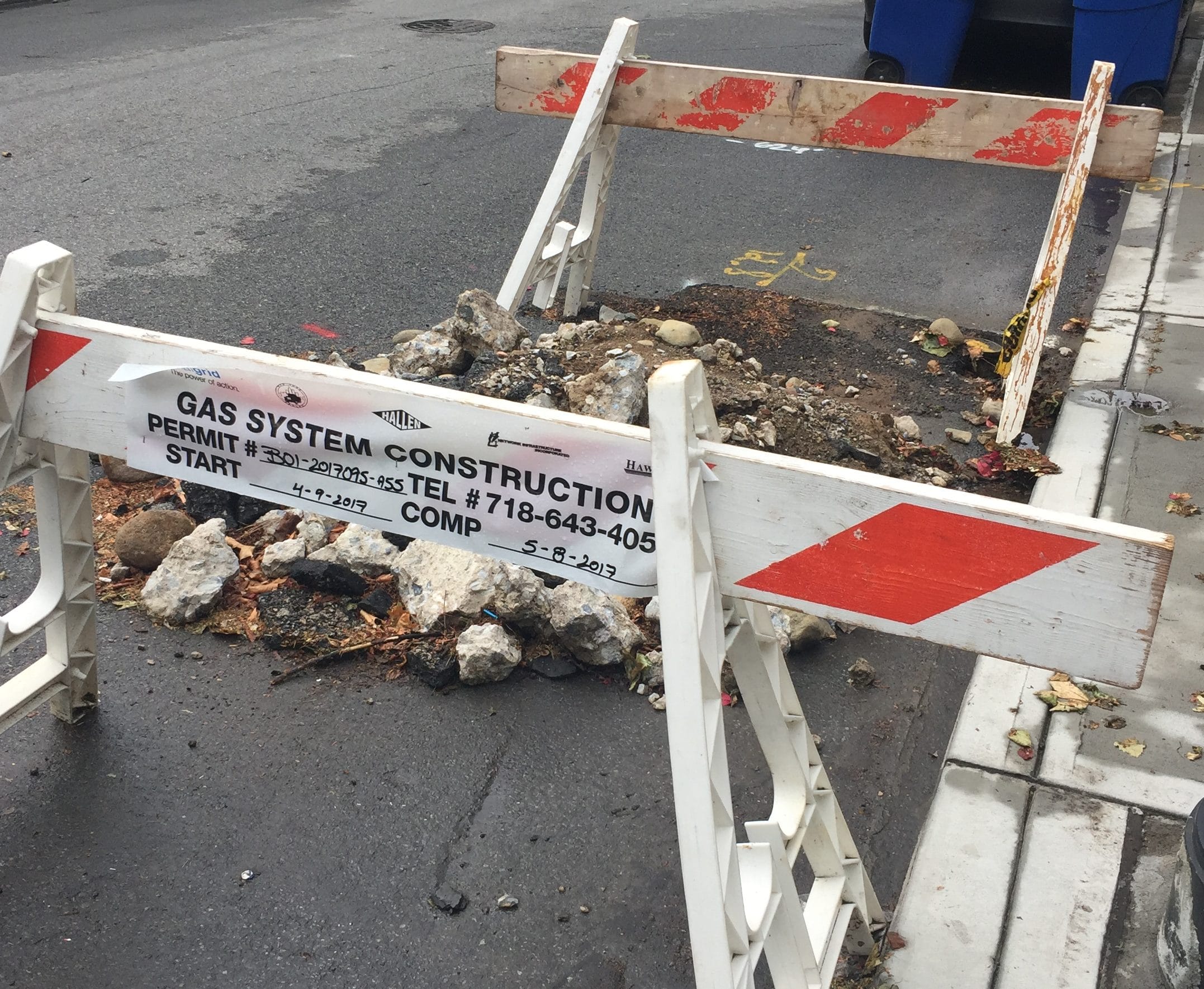 BENSONHURST – “We have all seen it time and again in our communities: the Department of Transportation resurfaces our streets, only for a utility company to rip up the street a couple of weeks later in order to perform work. The process is inefficient, and residents are left inconvenienced,” Council Member 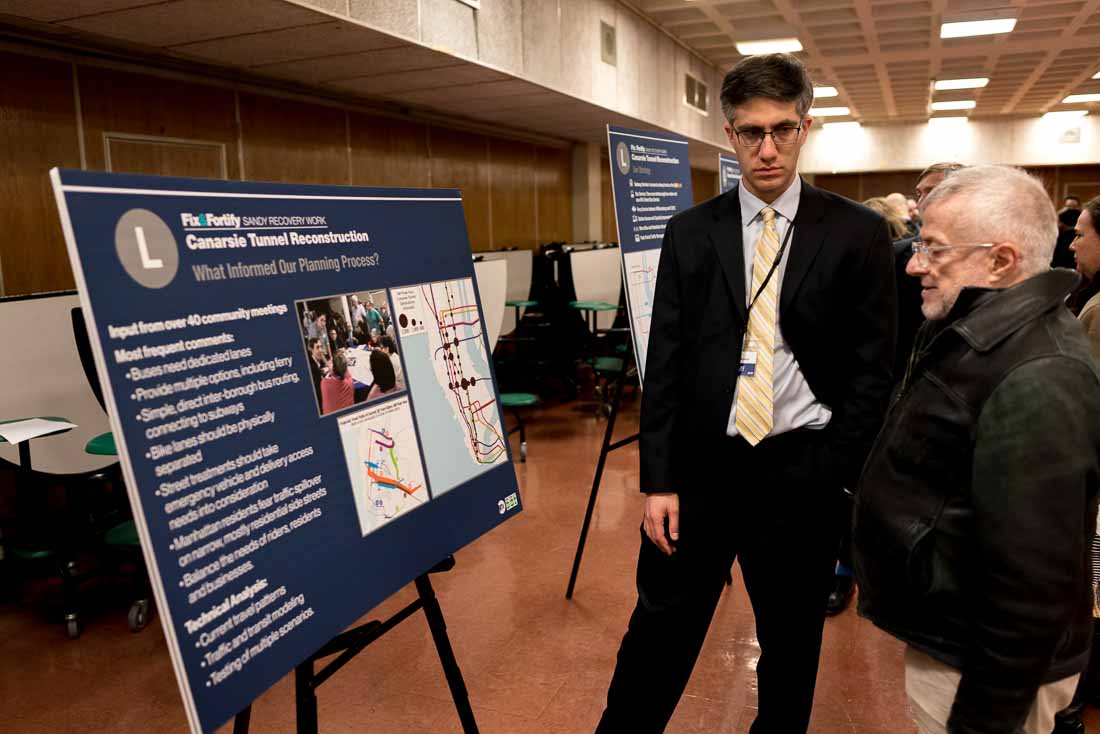