MIDWOOD — Blake Morris celebrated earlier this week with supporters outside the Avenue H subway stop in Midwood the 4,000 + signatures that put his name on the ballot in September Democratic Primary as a challenger to Senator Simcha Felder, who represents Senate District 17 – Borough Park, Flatbush, Kensington, Mapleton, Midwood, Sheepshead Bay, and Sunset Park.

Felder, who runs across the party lines come election day, yet has been voting with Republicans since he was elected in 2012. Morris is the first Democrat to challenge him in 6 years. You will see Felder running  again on the Republican, Conservative, and Independence Party lines, Morris may succeed in kicking him off the Democratic line, and the Reform Party will be running Luis Rivera as an option.

“Thank you to all of our volunteers, our staff, and the thousands of people who signed petitions to put a real Democrat on the ballot on Thursday, September 13th,” Morris told the crowd. Felder famously said that if you were looking for a real Democrat to represent you, “I’m not your guy”.

Morris promises to support the issues that Felder has been blocking, like bringing speed cameras to school areas and passing the Reproductive Health Act.  He also supports the New York Health Act that would create a single-payer health care system across the state – legislation that has been passed by the Assembly and stuck in the Senate for years.

Bklyner reporting is supported by our subscribers and:

Felder for his part touts his loyalty to his constituents, a great majority of whom reside in the heavily Orthodox Jewish areas of Borough Park and Midwood, and putting them and their interests first above party politics, be they Democrats or Republicans.

He boasts that “no other office can beat him” at constituent service, and takes great pride in his “common sense” approach to legislation. Felder strongly opposed the plastic bag bill, speed cameras by schools, wants to increase the speed limit on the Ocean Parkway, is against select bus service, really wants to station an armed guard outside every school, and believes there should be special education standards for Yeshivas.

He has also been incredibly effective at bringing money to his core constituent base – he took home $1.2 million of the state’s $16 million in discretionary funds this spring – more than any other senator in New York. Most of it went to Agudath Israel ($850,000) and other Orthodox Jewish community institutions.  Midwood Library received $30,000 and a handful of public elementary schools received either $5,000 or $10,000.

Many of Senator Felder’s more progressive constituents take exception to his claims of constituent service, and following the last election, organized a grassroots group called New York State Senate District 17 For Progress, advocating for the senator to represent all residents of his district: 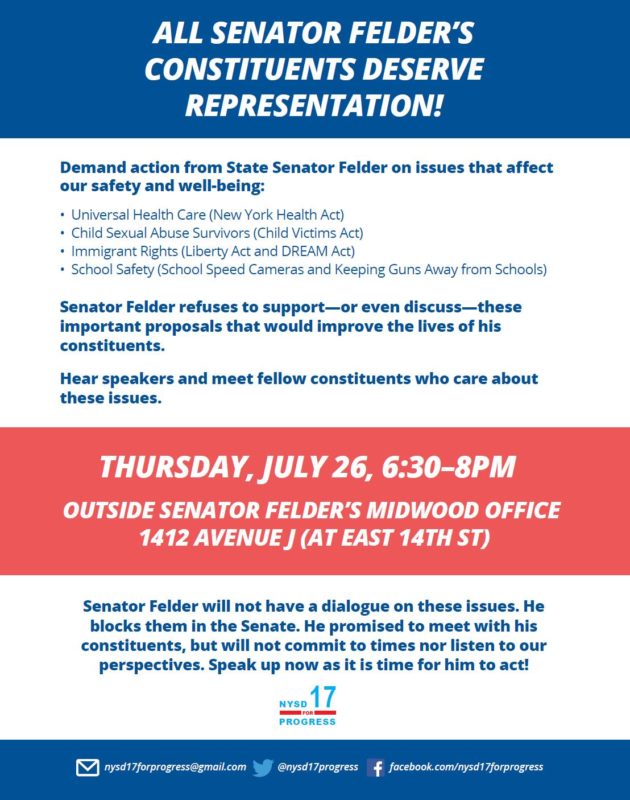 Felder seems to be only interested in talking about what he wants to talk about – like chocolate rugelach rather than speed cameras – no matter who’s asking the questions.

Threats from Within: The Rise of the Immigration Police State