The club gained instant awareness when a flyer supporting State Sen. Jesse Hamilton and authored by the Michelle Obama Political, landed in the email box of Brooklyn residents on Wednesday. After more than 24 hours, and several emails, text messaging and calls, an official from Hamilton’s camp released a number for the person associated with the previously unknown political club, bearing the name of the former first lady.

“We just put it together a few months ago,” said Lindiwe Kamau, president of the Michelle Obama Political Club. “We don’t have a social media presence or an official website.” This after remnants of the political club surfaced on Facebook in 2016 under a Pia Raymond post — the former 2017 city council candidate who challenged the long-standing incumbent, City Councilman Mathieu Eugene. 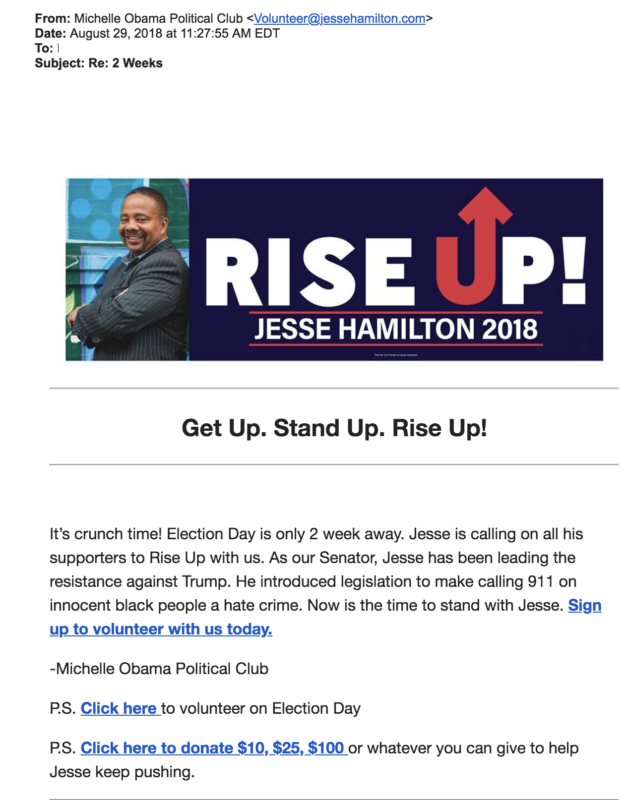 Kamau, 64, who is also the president of the Nostrand Avenue Merchants Association said she was emboldened to start the loosely organized group after people began to condemn the political officials she supported [State Sen. Jesse. Hamilton].

“We’ve seen newcomers who did not experience the history of this community, who were not actively involved in changing the culture of the drug and violence in the community in this past 10 years,” she said.

No matter the intentions, officials for Michelle Obama denied any association with the club. When contacted, officials in Michelle Obama’s office were not aware of any political club in the former first lady’s name and confirmed that she has not endorsed Hamilton.

The Michelle Obama Club isn’t the only group to be associated with the senator.

In July, Assemblywoman Diana Richardson lashed out at Hamilton in an 18-minute Facebook LIVE post accusing the senator of setting up Woke Brooklyn, a website that bashed Richardson for not supporting an education bill the senator introduced. Richardson followed up with an Instagram post detailing what she claims is proof that Hamilton purchased the email domain.

The Senator is facing a primary opponent, Zellnor Myrie, who is running alongside a coalition of anti-IDC candidates. The two will face off in the Sept. 13 primary.