Those born under the sign of the dog are said to be loyal, honest, friendly, and practical. While good natured, they tend not to be good communicators. Click here to find more about the traits and characteristics of those born under the dog sign and to learn about the other eleven Chinese zodiac animals.

Here are some family-friendly ways to celebrate the Year of the Dog in Brooklyn and say, “Gung Hay Fat Choy!”

Campfire Conversations: Lunar New Year
When: Friday, February 16, 3pm to 4pm
Where: Lefferts Historic House, 452 Flatbush Avenue
What: A story hour hosted by the Prospect Park Alliance and Brooklyn Public Library, kids will sit by a fire and listen to holiday tales and enjoy classic Lunar New Year treats.
How Much: $3 suggested donation

Lunar New Year At the Prospect Park Zoo
When: Saturday, February 17 and Sunday, February 18, 11am to 4pm
Where: Prospect Park Zoo (located in the Children’s Corner near the Willink entrance, at Flatbush Avenue & Empire Boulevard. There is also an entrance on Flatbush Avenue.)
What: The Prospect Park Zoo is hosting a celebration of the Year of the Dog starring Prospect Park’s favorite canines—the dingoes! Chinese Theatre Works will perform a shadow puppet show and calligraphy artists will teach kids how to write the Chinese character for dog.
How Much: Free with admission to zoo, Adults $8, Children ages 3-12 $5, Seniors $6

Brooklyn Lunar New Year Parade
When: Sunday, February 18, 11am
Where: 8th Avenue & 50th Street, Sunset Park
What: Hosted annually by the Brooklyn Chinese-American Association, the parade features lion and dragon dancers alongside drummers and a variety of other colorful characters. Before the parade, there will be free cultural performances and activities starting at 11am, with opening ceremonies at noon including speeches by elected officials and fireworks. 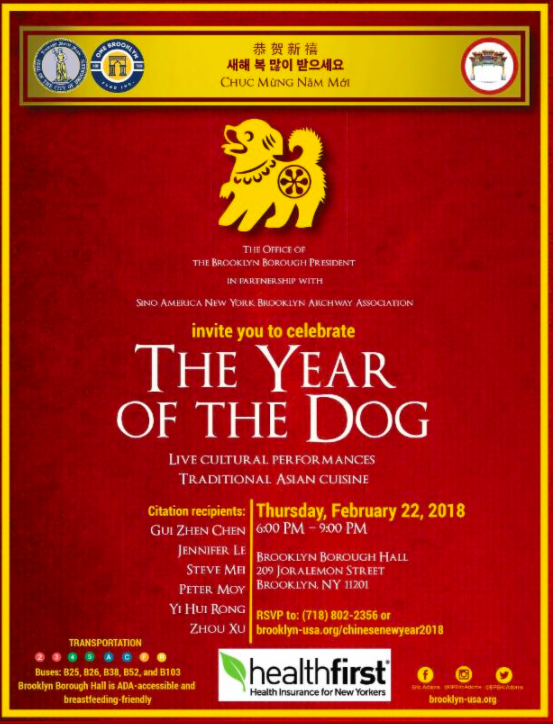