When considering where some of New York City’s brightest middle schoolers may end up, it’s easy to immediately think of the coveted specialized high schools, and the exam used exclusively for admissions there.

But the picture is, of course, broader than that, according to a report released Tuesday by the city’s Independent Budget Office.

Last school year, the 4,800 students who earned a top score on their 7th grade state English language arts and math assessments — another metric of performance — started 9th grade at 233 different high schools in the city, the report found, though disparities persist.

Sixty-two percent of top-scoring Asian students ended up at five different high schools — four of them specialized high schools — while the same was true for just 20% of Hispanic students.

Specialized high schools made a significant appearance: Brooklyn Tech, Stuyvesant, and Bronx Science were among the top-five places where white, Asian, and Hispanic high-scoring middle-schoolers landed, while only Brooklyn Tech was on the Top 5 list for comparable black students.

Where students end up in high school in New York City is based on a ranking and matching system, and in the case of schools with admissions criteria, whether they clear the required hurdles. So where students land is not necessarily the same as where they hoped to go. This year, for example, just 10% of the offers to specialized high schools went to black and Hispanic students, who make up about 70% of students citywide, renewing outrage over the racial makeup of the elite schools. Fifty-one percent of offers went to Asian students, while 29% went to white students.

But where students ultimately end up does provide another window into the city’s high-school sorting process.

“I just think it’s interesting to broaden the discussion around these high schools that we traditionally think of as, you know, the most sought-after among high-scoring students,” said Sarita Subramanian, the IBO’s supervising education analyst. 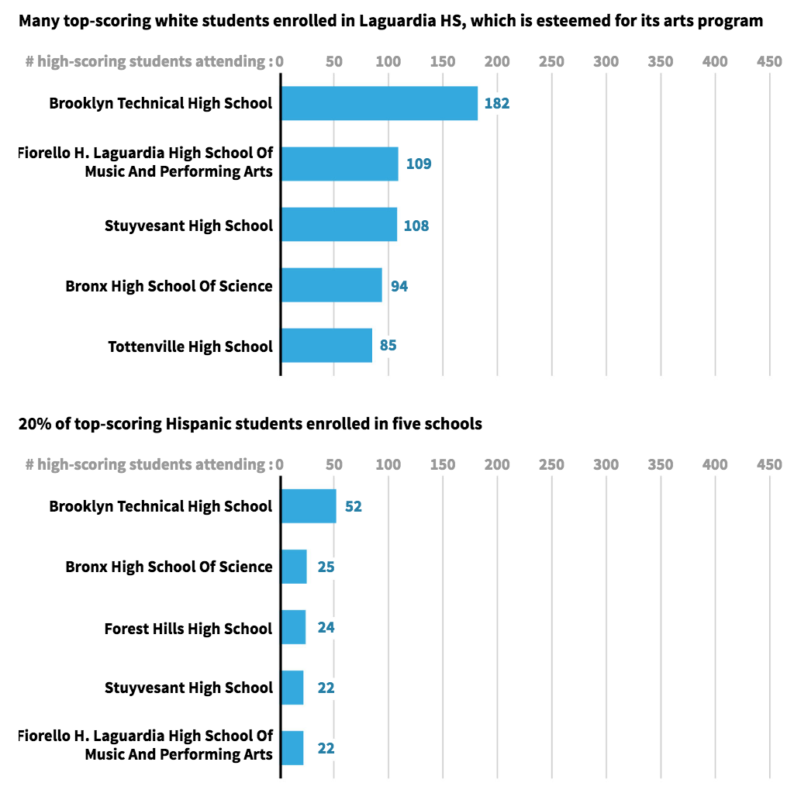 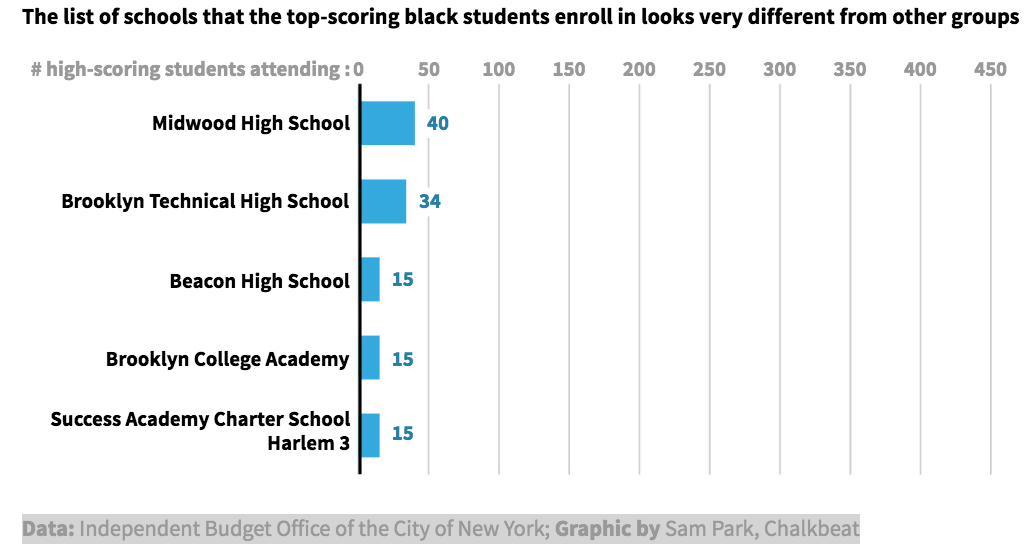 The five schools where top-scoring black students landed were largely different than other groups. Beyond Brooklyn Tech, these students ended up most frequently at Midwood High School in Brooklyn, Beacon High School in Manhattan, Brooklyn College Academy, and Success Academy in Harlem — the only charter school on the list. At Success, the students were almost certainly already attending a Success Academy school, as the charter network doesn’t accept new students after fourth grade.

The report comes as the city is neck-deep in a debate over diversifying the city’s eight specialized high schools and whether to get rid of its unique entrance exam, the sole criteria for admission.

The report didn’t look at why students in different racial groups had a different set of five high schools where they most frequently ended up last year. That could be for a variety of reasons, said Tomás Monarrez, a research associate at the Urban Institute who has studied school segregation.

Where students live could influence outcomes. Or, Monarrez guessed, perhaps one of the top five schools where high-scoring black students enrolled enjoys a reputation for serving that community well.

“This gets us started with this conversation as you can tell, but it kind of raises more questions than answers,” Monarrez said.

The report also looked at how many separate high schools each racial group of top-performing students attended. Hispanic students ended up at 171 high schools, the largest number, while white students enrolled in the smallest pool, containing just 81 schools. Subramanian said their investigation doesn’t provide sufficient data to explain why.

And again, the theories vary. For example, Hispanic students make up the largest share of city students, which may be why they’re scattered more widely than other racial groups across the city. What would be key to know, Monarrez said, is how many of these top-scoring students were matched to their top choice when they applied to and ranked high schools.

“We need to know more specific information about preferences, especially in this kind of school choice system versus the actual school assignments that are taking place to understand what drives segregation in New York,” Monarrez said.

Report: With or without Industry City rezoning, Sunset Park has a housing crisis

Shanah Tova To Our Jewish Neighbors, Have A Sweet New Year!

Report: With or without Industry City rezoning, Sunset Park has a housing crisis

Shanah Tova To Our Jewish Neighbors, Have A Sweet New Year!

Volunteer to help a disabled adult

Brooklyn is Not a Sacrifice Zone