The initiative aims to help improve the pipeline of local talent to serve the short- and long-term needs of regional businesses in growth industries – in particular – helping train workers for careers in tech and building trades in particular. The city’s Economic Development Council will allocate most of the local funding in Brooklyn and throughout the other boroughs.

Hochul joined Councilman Robert Cornegy Jr. at Per Scholas — a twenty-five-year-old workforce development program specializing in preparing students for careers in tech that graduates a hundred students each year –  to highlight what state funding has contributed to in the past. Currently, Per Scholas graduates 100 tuition-free students annually from their Brooklyn campus. Private, corporate and government entities subsidize the $8,000 cost per student enrolled in the program.

“I think the model is successful,” said Hochul of Per Scholas that graduates about 100 students a year from their Brooklyn campus of which 80% is directly placed into the workforce. “I think we already know what works.”

Workforce development groups statewide can apply for grants through the new website dedicated to the initiative, and they are targetting for funding programs serving minority communities, unemployed youth, women, and individuals with disabilities.

“We are absolutely looking to prioritize funding to communities that have been traditionally underserved,” said Madhuri Kommareddi, the state’s director of workforce development.

In the past, such programs benefitted those who did not go to college, but whether it’s changing careers or getting a late start, programs throughout Brooklyn have aided residents in finding new job opportunities.  Ability to avoid debt was a major driving force for entering a certificate-based work program, students at Per Scholas said. 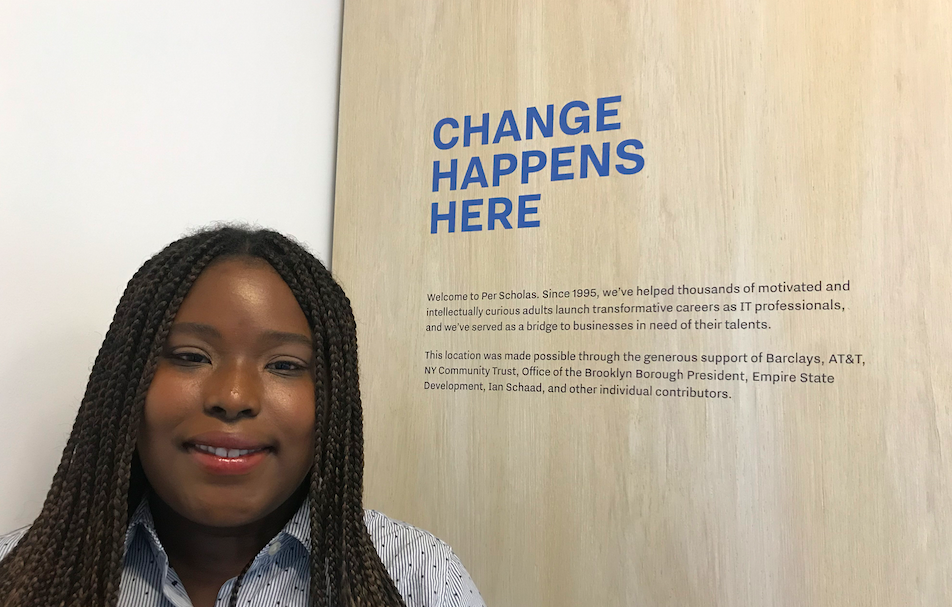 “I went to Baruch College for a little while and now I’m in the program trying to get something that will lead me directly to a job, essentially,” said Stacie Lambert who is studying cybersecurity at Per Scholas. “It’s free, so that’s a plus,” added the Crown Heights resident who said working and going to school was “hard to juggle.”

Hochul says the additional funding will meet the growing demand for job-seekers choosing the 15- to 18-month certificate route, especially as it relates to tech.

The state’s Workforce Development department did not return calls in response to questions about past contributions from the state to similar programs or how many programs the state is currently funding. Nor would they confirm how many extra programs or students the state intends to provide service to with the additional funding.

In a New Installation At City Point, Strangers Spill Their Stories

In a New Installation At City Point, Strangers Spill Their Stories