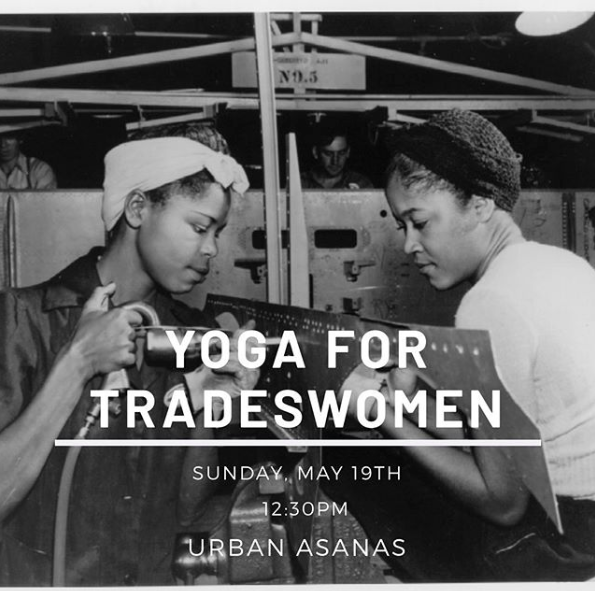 The hour-long classes, which are open to tradeswomen including electricians, ironworkers and carpenters, launched this spring in collaboration with the NYC Coalition for Women in Construction: a group that offers mentorship and community building for union members across the city, according to its website. Co-chair Rudy Mulligan and Ambra Melendez, an ironworker, came to Hubbard-Salk with the idea after finding her on Google.

“I had read some articles about her expanding yoga to audiences beyond wealthy white women, and figured she was a good place to start,” Mulligan explained. “We got super lucky with Jyll. She was all in from the beginning.”

In a Thursday phone interview with Bklyner, Hubbard-Salk, 52, explained that her tradeswomen classes focus on parts of the body that undergo particular strain on a construction site. Students range in age from early 20s, to retirees in their 60s. “Usually it’s a lot in their shoulders and a lot in their hips,” she said. “And they have a lot of things with their hands. Their hands are really tight.”

There are also intangible tensions to address. “It’s such a sexist business that you know their guards are up and they have to do even more because they are females in a man’s world,” Hubbard-Salk added. “They come in and they are very tight and very stressed and I give them 60 minutes to release all that shit and take the layers off. It’s a restorative class.”

On construction sites, Mulligan agreed, “working with injuries and sucking it up is not only expected, but a badge of ‘honor.'”

“We’re used to getting bellowed at on construction sites, so… I can’t say we were expecting to get yelled at (in the most loving way) by our yoga instructor,” she continued, referencing Hubbard-Salk’s unique style. “Jyll’s open-hearted and full-throated approach to her work resonates deeply with our crowd.”

A mother of three and Crown Heights resident of 20 years, Hubbard-Salk founded Urban Asanas in 2011 at 752 Nostrand Avenue. Two years ago, she says, she outgrew the space and moved her business around the corner to Sterling Place. She expanded yet again this April, debuting an adjacent 1,000-square-foot wellness studio with offerings ranging from an infrared sauna to massage and reiki. Brooklyn-based wellness brand BreadxButta also sells their CBD line out of the space. “It’s like a tango,” she says, of getting the wellness studio off the ground. “We’re learning the beat.”

Other popular recurring events at the studio include a Sunday morning 90-minute restorative class called Super Soul Sunday (no online reservations). Moms can attend the 10:00 a.m. class for free this week, in honor of Mother’s Day.

Hubbard-Salk acknowledges that she’s encountered some initial skepticism from tradeswomen taking her class for the first time. “Some of them are like, ‘What the hell are we about to do?’” she said. “But they’re open. It’s really beautiful. And they trust me.”

Sign up for $25 monthly tradeswomen classes, typically the second Sunday of the month, here. The studio is located at 843 Sterling Pl., 2nd Fl. Weekly community classes start at $10.

Masks In the Wild – PPE For Every Personality

Masks In the Wild – PPE For Every Personality