WILLIAMSBURG – Cops are looking for three men who they believe were involved in an attempted robbery earlier this week. 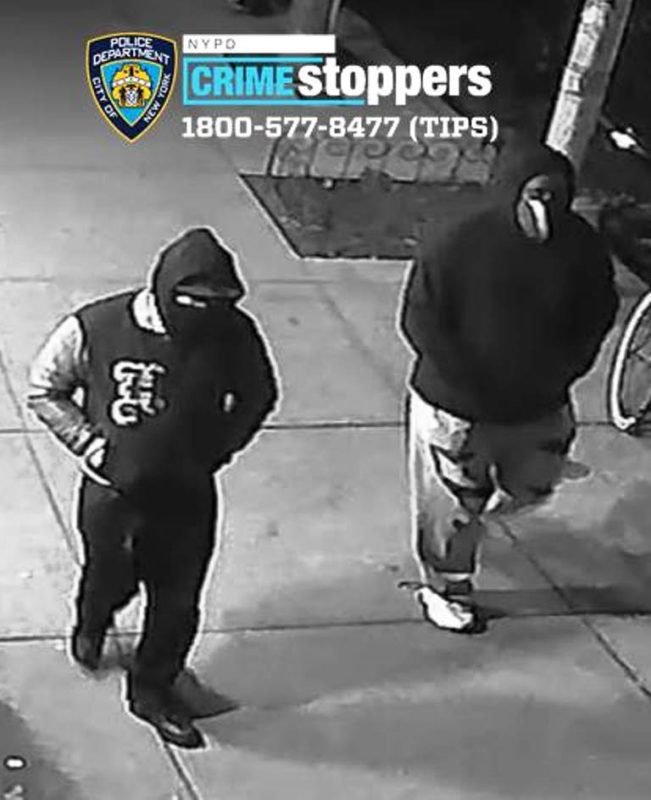 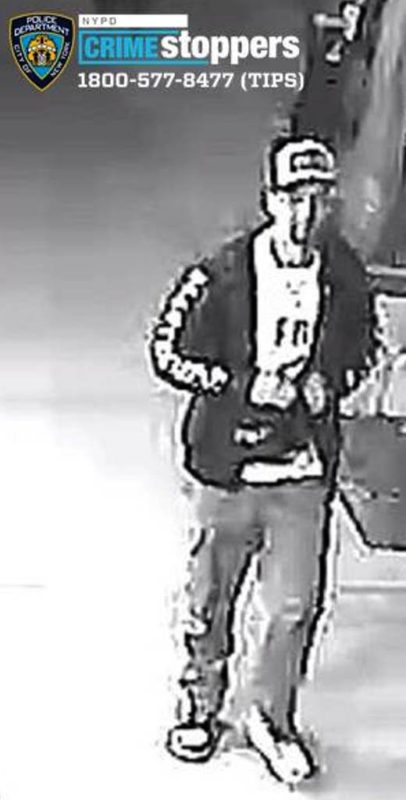 On Monday, November 2, at around 2:30 a.m., a 35-year-old man and a 32-year-old woman were walking in front of 30 Maujer Street, when two unknown individuals approached them with a black firearm, demanding the mans watch. The woman tried to intervene, which resulted in one of the two individuals shooting her in the ankle. According to the NYPD, a third individual exited 30 Maujer Street and began firing multiple shots at the two unknown individuals and they then fired back. EMS responded to the location and the female victim was taken to NYC Health & Hospitals/Bellevue, was treated and released. There was no property taken.

Cops describe the first unknown man as an adult, with a medium complexion and medium build with a mustache. He was last seen wearing a black varsity jacket, black pants, a black shirt, black sneakers, glasses and a Chicago White Sox baseball cap with the letters “SOX” on the front.

Cops describe the second unknown man as a dark-skinned adult with a heavy build. He was last seen wearing a black hooded sweatshirt, jeans and white sneakers.

Cops describe the third unknown man to be of light-complexion with a slim build. He was last seen wearing a black jacket with a skull and crossbones on the back and writing on the sleeves, blue jeans, a baseball cap and multi-colored sneakers.

The first two individuals were observed prior to the incident to be exiting a 4 door Hyundai sedan in front of 1925 Church Avenue but fled the scene on foot in an unknown direction. The third individual was last seen fleeing the scene in a blue Range Rover. Photos of the three individuals are included above.

CROWN HEIGHTS – Cops are looking for a man in connection with an assault that occurred earlier this week.

On Sunday, November 1 at around 1:15 a.m., an unknown man approached two women, aged 21 and 24, inside of a deli located at 214 Utica Avenue attempting to engage in conversation. The man individual began to punch both women about the head and body. The 21-year-old woman suffered a detached retina and the 24-year-old woman suffered pain and bruising, according to the NYPD. The unknown man fled the scene on foot in an unknown direction. EMS responded and transported both victims to Kings County Hospital in stable condition.

The unknown individual is described by the cops as a man between 20-30 years of age. A photo is included above.

CROWN HEIGHTS – Cops are looking to identify four individuals in connection to a robbery that occurred late last month.

On Tuesday, October 20 at around 8:13 p.m., in front of 334 Utica Avenue, a 29-year-old male cab driver got into a dispute with four women passengers. The women passengers punched the driver in the head while inside the vehicle. According to the NYPD, the women then forcibly removed the victim’s cell phone and approximately $100 before fleeing northbound on foot on Utica Avenue. The victim refused medical attention at the scene

Cops did not provide descriptions of the four women. Photos are included above.

BATH BEACH – Cops are looking for a man who approached a teenage girl on the Subway and forcibly touched her late last month.

On Monday, October 19 around 3:00 p.m., at the 20 Avenue Subway Station, a 15-year-old girl was riding aboard a northbound “N” train when an unknown man grabbed the girl’s buttocks. According to cops, the unknown man fled when the doors opened in the station to parts unknown. The victim did not report any injuries.

The individual is described as a man, between the ages of 20-30. A photo of him included above.

On Sunday, October 18 at around 1:40 a.m., in front of 4423 5th Avenue, two men approached a food truck, waved a firearm and demanded money. According to the NYPD, no money was removed and the suspects fled on foot northbound on 5th Avenue. No one was injured.

Cops did not provide descriptions of the two men. A surveillance video is included above.

SUNSET PARK – Cops are looking to identify an individual in regard to a commercial burglary that happened last month.

On Thursday, October 15, at around 10:30 a.m., an unknown individual entered an autobody shop located at 158 33 Street. According to the NYPD, once inside, the individual took an Apple IPAD valued at $300, then fled the location in an unknown direction.

Cops did not provide a description of the suspect. A are included above.

HOMECREST – Cops are looking for a man wanted for questioning in an assault that occurred last month.

On Wednesday, October 14, shortly after 3:00 p.m., at the corner of East 13th Street and Avenue T, a 12-year-old boy was sitting on the curb waiting for a friend when an unknown man came behind the victim and punched him in the face causing him to lose consciousness, in an unprovoked attack. According to the NYPD, the victim suffered fractures to his facial bones, bleeding and bruising. The unknown male fled on foot southbound on East 13th Street. EMS responded and transported the 12-year-old boy to Coney Island hospital in stable condition.

Cops describe the man to be between 20-30 years of age. No photo has been released.

NORTHERN BROOKLYN – Cops are looking for unidentified men in connection with a grand larceny pattern with five different incidents reported.

According to the NYPD, there have been five incidents throughout Northern and North Western Brooklyn where ATMs are being taken. The unidentified men removed five separate ATMs all with different amounts of cash, but over $49,820 in total.

As of today, no arrests have been made.

DOWNTOWN BROOKLYN – Cops are looking for a man in connection to an assault that happened in September.

On September, 13 right before 9:00 p.m., in front of 46 Hoyt Street, an unidentified man approached Angel Diaz a 79-year-old man and punched him, knocking him to the ground. The unidentified man punched Diaz multiple times, according to the NYPD. The suspect fled on foot. Diaz was transported by EMS to Methodist Hospital in stable condition. Diaz was subsequently transferred to NYC Health + Hospitals/Bellevue, where he was pronounced dead on Thursday, October 29.

Cops did not describe the unidentified man. A photo is included above.

The investigation is ongoing.

Anyone with information in regard to these incidents is asked to call the NYPD’s Crime Stoppers Hotline at 1-800-577-TIPS (8477) or for Spanish, 1-888-57-PISTA (74782).  The public can also submit their tips by logging onto the Crime Stoppers website at WWW.NYPDCRIMESTOPPERS.COM or by texting their tips to 274637 (CRIMES) then enter TIP577. All calls are strictly confidential.