After an inspiring 5,000 mile journey across the Atlantic from Africa to New York, the Spirit of Malabo is making one final trek, and it’s still a symbol of hope and awareness.

From 2014 to 2015, Victor Mooney rowed a 5,000 mile solo transatlantic crossing in his small boat, Spirit of Malabo, a 21-month trek that he undertook to raise awareness of HIV/AIDS and to promote HIV testing in the memory of his brother, whom he lost to AIDS in 1983.

Born and raised in Bed-Stuy, Mooney is proud of his hometown, and its influence on his journey. “I’m a Brooklyn boy,” he said, “We’re fighters. We never give up.”

And it did take a lot of fighting. Mooney made three attempts to cross the Atlantic over the years that all ended abruptly due to equipment failures. He said the first boat, that took him 3 years to design and build, lasted about 30 minutes.

That time, he was rescued off the African coast by a Senegalese Coast Guard officer named Matar Diop Kane. The tall man who saved his life had flown out, all these years later, to be in attendance at today’s ceremony.

On Mooney’s fourth and final attempt, he set off from the Canary Islands, rowing his craft across the Atlantic, battling a white-tip shark at sea and pirates in Haiti, as well as inclement weather and a shortage of food, ultimately crossing under the Brooklyn Bridge back home.

By that time he had lost 80lbs and was exhausted, but today he laughed as he retold the story: an FDNY boat blasted the theme from “Rocky” from its speakers as he arrived, giving him the strength for the last stretch.

The Spirit of Malabo was built in Sao Paulo, Brazil, before it was shipped to Kingsborough Community College for inspection, and then SUNY Maritime College in the Bronx for sea trials. It is named after the capital of Equitorial Guinea, a country Mooney calls home.

After making the transatlantic journey, the Spirit of Malabo is headed back to Equatorial Guinea, where it will sit on permanent exhibition at the Museum of Modern Art in Malabo—continuing its mission to inspire and uplift, raising awareness not only about HIV/AIDS, but about the indomitable nature of the human spirit, exemplified by Mooney’s journey.

The decommissioning ceremony—which ends a boat’s active service—was on a symbolic date as well: October 12 mark the anniversary of the Equatorial Guinea’s independence from Spain.

In attendance were representatives from Brooklyn’s Cultural Museum of African Art, a counsellor from the Permanent Mission of India to the UN, a crew from the FDNY Marine Unit, and Mssr. Diop Kane. Those present were invited forward to sign the brightly painted boat, and inscribed messages of solidarity and blessing.

Mr. Mooney stage-managed the brief ceremony, reading aloud from a proclamation from the Bronx Borough President, arranging the group for pictures, and giving a short speech.

“This boat won’t touch the water again, but God willing, it will touch the hearts of humanity,” he said as the group bowed their heads.

Mooney spoke in remembrance of his brother, whose death inspired the trip: “So Tony, I love you, I miss you, God bless you, thank you,” he intoned.

With his final signature of his own, Victor Mooney not only decommissioned the Spirit of Malabo, but closed a chapter of his life, he remarked. He knelt to kiss the hull, thanking the boat for it’s service, for keeping him safe, and promised to one day see it again.

As the group slowly broke up, the departing fire boat gave a water salute, its cannons firing jets into the air to honor Mooney’s undertaking. He ran far to the end of the dock to watch, outstripping the crowd—silhouetted, alone against the sea, one last time.

The Corporate Punk String Band at House of the Sun Setting 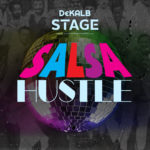