At the height of the COVID-19 pandemic, a line formed on the streets outside of the Masbia Soup Kitchen in Borough Park, where over 200 people waited for a chance to grab as many groceries as one cart could hold.

The line went all the way down 47th St and then right down City Bank Street. Hundreds of people on Sunday through Thursday in April waited for their chance to get freshly donated groceries delivered to Masbia Soup Kitchen.

“It’s just very, like a bottomless pit,” said Alexander Rapaport, the executive director of Masbia Soup Kitchen. “How should I say it? It’s very hard to win, to see the end of it.”

Rapaport said the demand for food increased by 500% right as the pandemic hit and the soup kitchen needed to find a better way to serve as many people as possible. This led to an appointment-based system called the Plentiful app.

The app allows people to reserve a time slot one day a week to get groceries from Masbia, via an app or text message. Five people are given a time slot every 15 minutes. Those with an appointment show their ticket at the front of the line and then fill their cart up with groceries from one table.

The long line that once stretched for blocks around the soup kitchen has now been eliminated because of the app.

Rapaport wanted to get rid of the line completely and go digital once shops on the streets opened up again. The app is supposed to clear the sidewalks, making it a more pleasurable experience without as much chaos.

The new system has over 6,500 people wanting to make an appointment on any given day — and that number is only from the Borough Park location. The appointments are only for the grocery service, but people are able to come on a first-come first-serve basis to get hot meals, as well.

“We try and serve 2,500 appointments a week per site,” Rapaport said. “Now there are so many people wanting appointments, it’s impossible to give people enough food for two weeks. Every day we try different ways to make it possible. We keep fine tuning it as we go.”

Last July, the Borough Park location served 979 hot meals. This July, that number jumped to 15,615 – sixteen times more than last year. The number of people served by the grocery service in July of this year was more than double – 15,251 people compared to 6,142 last year.

Yudi Wexler, 21, a full time student at Baruch College, volunteered to make hot meals at Masbia back in July.

“I felt that I was actually doing something for people,” he said. “They’re giving out so much and I’m sure that they are the difference between people going hungry and people not. For many, many, many people.”

The demand has not been easy to meet, with Rapaport pointing out that supplies and staffing are only two of many challenges when it comes to trying to fulfill the needs of those coming to Masbia.

“We are going in a marathon, everyone is stressed,” Rapaport said. Every day can bring new challenges and things to work through. “… We need to make sense of it all. That is our M.O. There’s a lot of randomness.” 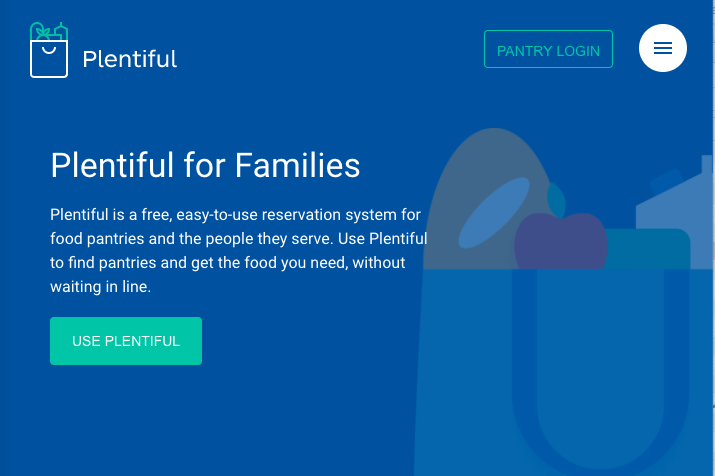 To make an appointment, a ZIP code needs to be provided, and the data shows a big uptick in appointments coming from the 11220 Sunset Park area, which is primarily Asian and Hispanic.

‘If you were to stand in front of our place, you could see the clientele,” Rapaport said. “There is a huge number of people coming from that ZIP code in addition to the local [11219] ZIP code.”

Rapaport added that the clientele is “beyond imagination diverse,” and Masbia strives to serve as many languages as possible. The Plentiful app can be used in English, Spanish, Russian, Chinese, Bengali and Arabic – something Rapaport is proud of.

Terry Silverman, 56, is an executive assistant who lives in Borough Park. She feels fortunate that she hasn’t had to rely on the services of Masbia, but knows it’s done great work.

“I do know that they are a very charitable organization,” she said. “Many times when I used to physically go into work one or two days a week, the line outside at 7:00 in the morning to get food was definitely diverse and long. I hope that I never need to know more than that.”

On top of grocery and hot meals services, starting Sept. 18, there will be a new outside area where people who get hot meals at Masbia can sit and eat. During the week, anyone in the community is allowed to utilize the new outside dining. Rapaport even went to local restaurants to let them know they are able to use it as well.

The newly built seating area is 70 feet by 16 feet and will seat 36 people at a time.

“We will try and have really spread out seating and tables,” Rapaport said. “So it never gets to a point that people are super near each other.”

As the pandemic continues on, Masbia will too. With regular volunteers coming back to help, new donations from local pantries and a newly added seating area, Rapaport is not too worried about meeting more demands.

Support Local Businesses With The First Ever Taste of Prospect Heights

Support Local Businesses With The First Ever Taste of Prospect Heights