CROWN HEIGHTS – After three years of renovation and a yearlong closure, the St. Johns Recreational Center in Crown Heights reopens the end of April.

The center, located at 1251 Prospect Place (between Troy and Schenectady Avenues), underwent overall aesthetic improvements as early as late 2016. The rehab effort included new gym floors and MediaLab computers. But the New York City Parks Dept. dedicated the bulk of the project to a new heating, ventilation and air conditioning (HVAC) system.

The Park Department designated April 29 as the official re-opening date.

Mayor de Blasio’s administration allocated $3,090,000 to the project. During the HVAC renovation, contractors discovered asbestos and immediately closed the center in May 2018. The Parks Department then contracted the safe removal of the asbestos.

“We are grateful to everyone for their patience as we made necessary repairs to the center, and we are excited to welcome everyone back,” wrote the Department in a statement.

Neighbors can also expect a new outdoor adult fitness area section in 2021, compliments of City Council. The Parks Department noted that the design process usually takes a year, followed by nine months of procurement and then another year for construction. 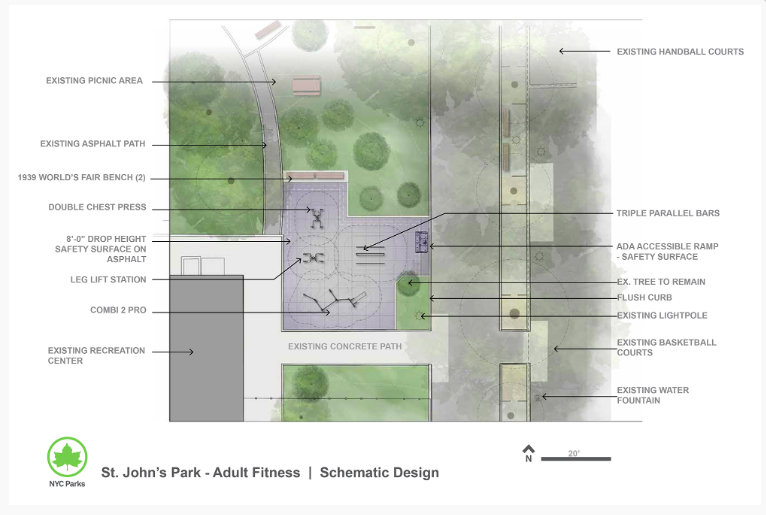 The recreation center first opened in 1956, after Robert Moses dedicated $1.5 million for renovations in 1953, according to Brownstoner. At which time, the Parks Department installed a 75-by-42 foot pool.

In 1987, the center underwent a $350,000 rehabilitation. At the time, 70 Parks employees spent 1500 hours waxing floors and cleaning tiles throughout the facility.