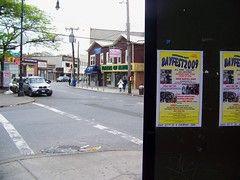 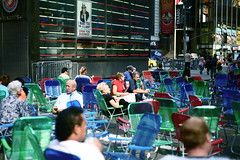 Photographer Lisanne Anderson snapped this rare scene of Sheepshead Bay Road (left) during a moment when there was no traffic on the streets. Surprised by the desolation, she attributed it to the possibility that everyone was already at Bayfest, which was currently underway.

This rare shot of the usually very busy road, made us wonder: What would happen if Sheepshead Bay Road was overrun by pedestrians walking where previously there were buses and livery cabs picking up illegal fares? Over at Subchat.com, our article about the Station Plaza development has kicked off quite the discussion. One commenter suggested that, with the proposed new street, there’s the possibility that Sheepshead Bay Road between East 14th street and East 16th street could be pedestrianized.

So, what do you think, Sheepshead? Could the road end up looking like Broadway in Manhattan did when it was shut to vehicular traffic (right photo)? We think not.