The organization seeking to halt the development of the proposed Voorhies Avenue mosque held a rally Sunday afternoon to publicize the predicted quality-of-life issues. But prejudiced and fearful statements from attendees revealed a rift in the group that could be undermining its credibility.

Bay People, Inc., organized the rally to convey a clear message: parking, traffic and noise complaints are at the heart of their opposition to the mosque. Speakers came to the sun-drenched podium, many with prepared statements designed to reinforce their defense that they’re not bigots.

“This demonstration is not anti-Muslim,” said one speaker who declined to give his name to Sheepshead Bites. “We’re here to demonstrate against this specific project … this is about our quality of life. It’s about our peace and quiet.”

Protest signs focused on politicians, quality of life, and M. A. S. (click to enlarge) 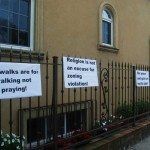 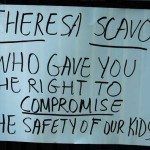 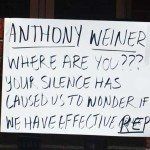 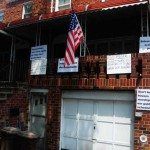 Speakers also railed against local politicians, including Councilman Lew Fidler and Community Board 15 Chair Theresa Scavo, for dismissing their requests for due diligence.

“I’ve lived in Sheepshead Bay for 30 years,” said Susan Gerber. “It’s a fantastic neighborhood and has not changed. We need to fight to keep it” quiet and safe. Gerber demanded traffic studies and other analyses of the impact of a community center on a narrow residential street. “Where are our politicians? They have abandoned us,” she added. “We are not racists. We are realists, and we are entitled to traffic studies.”

No politicians were in attendance to respond.

The locally elected (or appointed, in Scavo’s case) were not the only targets of the speakers’ defense against claims they’re bigots. Speakers snarled at Courier-Life reporter Tom Tracy for his outlet’s previous reporting, which framed the debate in terms of ethnic tensions and put quality-of-life issues to the side (Sheepshead Bites was not spared this critique, either, for its recent report highlighting a 15-year-old Muslim-American shouted down by counter-demonstrators).

Joseph McCoppin, a 20-year resident, took the stage to tell his neighbors to respect Muslims, and remind them that Muslims make good neighbors. He lashed out at a recent column in the Bay News by Shavana Abruzzo, which he called “bigoted” and “disseminating hate,” representative of exactly what local mosque opponents should endeavor not to be.

But McCoppin’s statement highlighted a tension in the crowd between those who fear more than just quality of life issues.

“They’re building mosques and it’s not really for religion, it’s for ideology,” said Jacob Penek, a member of the crowd. “The next step is creating training camps for Al Qaeda … I tell you, it’s a network of terrorism, not religion.” He added, “For me, it’s not simply about traffic. [It’s about] what will happen in the next 15 years.”

As Brooklyn Paper noted this morning, attendees of the event had no shortage of sharp, bigoted remarks against Muslims. One attendee even told the paper that he planned to bomb the mosque if they build, and others were concerned about “foreign interests” in their backyard.

With sentiments like that floating amongst the crowd, event organizers struggled to keep on message. One man grabbed the microphone and began chanting “This is not Islamabad” before organizers wrestled the mic away from him.

Some, like McCoppin, said that the racist element of the opposition is undermining the strength of the group’s argument.

“That’s their whole strategy,” McCoppin said of the mosque advocates. Though he notes the movement is “politically, ideologically disorganized,” the hateful remarks give the media and mosque developer justification to write them all off as bigots.

“They’re playing right into the hands of the developers,” said McCoppin. If the group were able to maintain their message of quality-of-life issues, the developer “doesn’t have a leg to stand on. Look at how narrow [Voorhies Avenue] is, and it’s a two way street.”

“Of course there are hatemongers in this neighborhood,” he added. “There’s always that reactionary know-nothing element,” but they shouldn’t be allowed to control the debate.

McCoppin might find a friend in some of the public officials he and other speakers lambasted, as even Scavo noted back in January, when the issue first surfaced, that quality of life issues could be a credible complaint when separated from anti-Muslim rhetoric. We reported in January:

Scavo added that the group might have a chance if they fought their battle on the concrete issues of parking and traffic. She pointed out that Voorhies Avenue is a congested street with one lane in each direction.

“If you want to succeed, do not use the word mosque. Do not use the word Muslim,” said Scavo. “Request the traffic reports. Go take photos of the double parking at the other mosques during calls to prayer. Have they done that? No. Because they’re lazy. You can’t just go with your mouth. You need paper.”

But though the group may gain ground on quality of life issues, members don’t seem ready to root out or condemn the racist faction of the opposition.

When discussing such a heated issue, bigotry is a “fact of life, and you’re going to have to adjust to it,” said Bay People member Yan Savinsky. “You’ve still got to keep fighting … [ignorance] is inherent in a democracy.”

“I don’t think it will,” said Bay People member Alex Tenenbaum when asked if the bigoted rhetoric hurt the group’s mission. “Our issues are set, and all we need is to put them out there to the public.”

“Obviously there are different opinions,” he added. “But we can’t control every person in the crowd.”