Tucked away among the trees of Buckingham Road, just before Albemarle and not far from Church Avenue, the structure known as “the Japanese house” is, even in our neighborhood filled with homes that easily adhere to memory, an oddity – and one that has attracted everyone from curious passersby to world-renowned architects to the unique site.

“Just after we had first moved in, we were entertaining on a Sunday when a woman started tapping on the window,” said Gloria Fischer, who moved into the house, which was completed in 1903, with her husband about 40 years ago. “She said, ‘I was wondering if this was as interesting inside as it was outside.'”

As it turns out, it is indeed as interesting inside as it is outside, and Gloria on Sunday afternoon was kind enough to open her house up to us and a group of about 15 people from the New York Adventure Club – which its founder, Corey Schneider, told us he “started to bridge locals with the neighborhood they want to get to know better.” Gloria will be holding upcoming tours as well, including one in November. We’ll let you know the specific date, time and how to RSVP once it’s confirmed.

While urban legend has it that the house was built special for the Japanese Ambassador and shipped over piece by piece from Japan, the home was actually built by the American architecture firm Kirby, Petit & Green in the Prospect Park South neighborhood, which was developed by Dean Alvord at the turn of the 20th century.

In 1898, Alvord purchased 50 acres just south of Church Avenue and west of the Brighton Beach rail line for $280,000 and aimed to develop a “high class” suburban community that he hoped would “illustrate how much rural beauty can be incorporated within the rectangular limits of the conventional city block” for “people of culture with means equal to some of the luxuries as well as the necessities of life,” according to the city Landmarks Preservation Commission’s historical designation report for Prospect Park South in 1979.

One of about 205 houses in Prospect Park South that claim a variety of architectural styles, from Italian villas to Spanish Mission and a Swiss chalet, the Japanese house was finished by 1903 – and in July of that year, Alvord used the building as an advertisement for the development, the LPC report says.

The 1903 advertisement, which appeared in Country Life in American magazine, noted that the Japanese home’s interior was “a faithful reflection of the dainty Japanese art from which America is learning so much” and as being “thoroughly practical, containing a large living hall with ceiling panels in hand-painted Japanese designs. Great fireplace and mantel with carved heads. Parlor in decorated white mahogany panels and wood ceiling. Dining room with high wainscot and leaded glass windows with dragon design,” the LPC report states.

The original cost of the building was about $12,000 – and it was then priced at $26,500 to sell, which the LPC report points out was “very high” for the neighborhood at the time.

“This house was built as an oddity, and it didn’t sell at first,” Gloria said. “It was the most expensive house in the neighborhood.”

The home ended up selling in 1906 to doctor and writer Frederick Strange Kolle (a pioneer in radiology who wrote this book in 1898 on x-rays and another about cosmetic surgery) for about $26,000.

Kolle and his wife, Loretto Elaine Duffy, a motion picture script writer and novelist, didn’t stay long in the house – they sold it in 1908 to real estate agent Fitch Herbert Medbury and his wife, Lulie, who lived there until 1910. They then sold the house to Herbert O. Hyatt, a Brooklyn manufacturer. The home was sold to the Fischers in 1972. 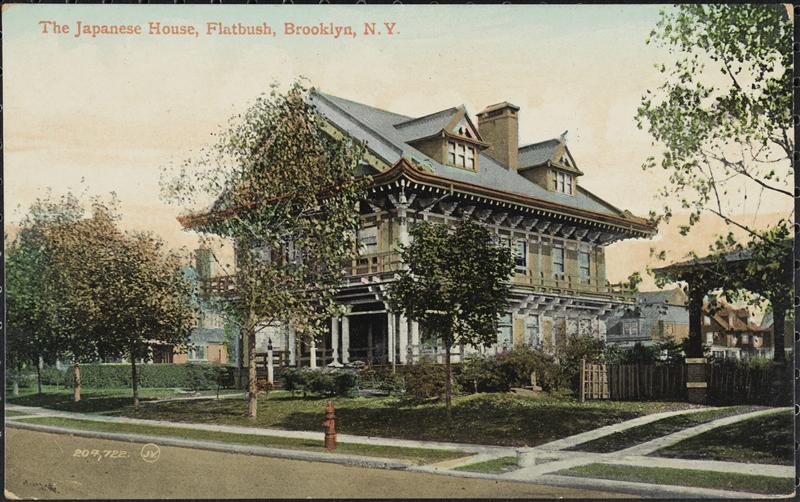 Image via the Museum of the City of New York.

From its inception on, the home has attracted many a curious person, and postcards of the house were even produced and distributed not long after the home was built.

“It’s fun – I’ve had architects from all over the world come here,” Gloria said.

When she first moved to the Prospect Park South home, Gloria admits she was skeptical – a Riverdale native, she hadn’t set foot in Brooklyn until her foray with her husband.

“I would whisper that I was going to live in Brooklyn then,” continued Gloria, who said that quickly changed and she soon fell in love with not just the house, but the entire neighborhood.

“I’ve lived in the house 40ish years – I raised my family here, my two children were always grateful we didn’t move to the suburbs – the proof of that is they both live in Brooklyn now with their families,” Gloria told Sunday’s tour group.

Many of the original aspects of the home remain, though the Fischers, of course, filled the space with many of their own decorations – an incredible assortment that could easily be stared at for far longer than the tour allotted. But, Gloria stressed that nothing has been done to the house that would significantly alter it – “we never event put in central air conditioning because it would have disturbed the wood,” Gloria said.

Inside the house, which is guarded by carved dragons and includes six bedrooms and a billiards room, there is an impressive array of artwork, Chinoiserie vintage chandeliers, blown glass, African carvings, Art Nouveau lamps, and antique furniture. There’s a lantern saved from a Chinese theater that was torn down in Boston, a 1920s espresso maker, and even the innards of an organ from the New York Society for Ethical Culture.

With the truly astounding assortment, it’s no surprise that when a tour goer asked Gloria if she has a favorite piece, she said no.