It was a brisk morning on Sunday when a crowd of outraged Brooklynites rallied on the corner of Avenue J against the new prohibition of right turns at certain key intersections on Ocean Parkway.

The “Save Ocean Parkway” protest was organized by State Assemblymember Dov Hikind and attended by other pols like City Councilmembers Chaim Deutsch and Mark Treyger, Public Advocate Letitia James, Comptroller Scott Stringer, and Community Board 12 Chairman Yidel Perlstein who are all against the changes.

“Eliminating right turns will only endanger the safety of motorists, children and their families who live adjacent to Ocean Parkway, and will undoubtedly create havoc for all,” said Hikind. “Let your voice be heard! No more no turns!”

This will redirect drivers to the service roads to make turns despite their tendency to be completely blocked when someone is double parked, or a truck is stopped. It will also make it harder for emergency vehicles to get through, said protesters on Sunday.

“I as a parent have called 911 for an emergency for one of my children who needed EMS,” said Deutsch “How can we rely on our first responders and 911 when we have congestion and traffic along Ocean Parkway? We need to make our voices loud and clear.”

The DOT’s Pedestrian and Bicyclist Safety project will take two years and cost $15 million, and will have these traffic changes in effect as early as February 2017.

The plan was presented to community boards in 2015 with a slideshow. The slideshow didn’t include the elimination of right turns on Ocean Parkway, according to The Yeshiva World.

This conflict points to a disconnect between State and City governments, according to Treyger.

Below are more photos from Sunday’s rally: 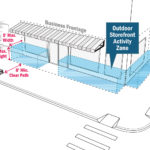