FORT GREENE – Train service was delayed this morning after a 29-year-old man was hit by a southbound Q train from the DeKalb station platform around 9:45 am.

He was taken to Methodist Hospital in serious but stable condition, with lacerations to the head.

We apologize for the delays you experienced this morning. Someone was struck by a train at DeKalb Av. Power was removed so emergency personnel could assist the person. ^JP

Shawn Lipowski, a straphanger at the scene, heard a “single loud thud.” He saw something go under the train, but thought it was a large piece of luggage.

“I walked towards the middle of the platform and a crying woman was saying she thought the guy jumped which is when I realized it was a person,” he told Bklyner.

Almost immediately after the hit, an MTA worker was checking under the train telling the man not to move, Lipowski says; the fire department arrived soon after.

“People were already complaining about the delays as I left.”

Warning signs of a suicide include talking about wanting to die or feeling as if you have no purpose, displaying extreme mood swings, withdrawing or becoming isolated, talking about being a burden on others, sleeping too little or too much, acting recklessly or increasing the use of drugs or alcohol. If someone you know shows these warning signs, do not leave the person alone, seek help from a medical or mental health professional, and call the U.S. National Suicide Prevention Lifeline at (800) 273-TALK (8255). Find more information here.

ER Doctors At SUNY Downstate Are Taking It One Day At A Time: “I don’t look till tomorrow. I think that will break all of us.”

Brooklyn is Preparing for Virtual Seders During the Pandemic 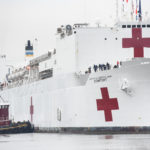 ER Doctors At SUNY Downstate Are Taking It One Day At A Time: “I don’t look till tomorrow. I think that will break all of us.”

Brooklyn is Preparing for Virtual Seders During the Pandemic