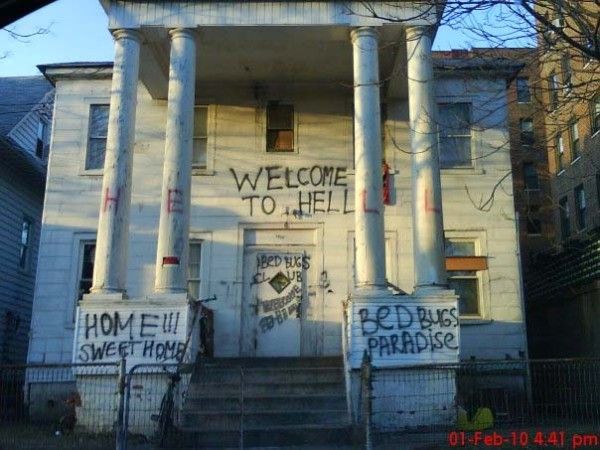 The owners of the two houses at 1809 and 1811 Voorhies Avenue told Courier-Life reporters they would prefer to subcontract the houses to the city for use as a halfway house or homeless shelter.

We wrote about the houses last week, after tenants at 1811 Voorhies sprayed graffiti reading “Welcome to Hell” and “Bed Bugs Paradise” along the front. The graffiti has since been removed.

One can only wonder what set Courier-Life on the case (hmm…), but reporters spoke to the owners, Iliya Honovich and Vladimir Parsol, who said they bought the properties back in 2006. They are approved only for single room occupancy (SRO) so they can only serve as rooming houses. The duo bought the pair of houses hoping to rezone it to build condos, but Community Board 15 rejected their attempts saying there are already too many condos in the area.

“Having an SRO is like a suicide deal. There’s always going to be some kind of problem. There’s always bums and weird people that live there,” Honovich told Courier-Life.

Now the owners are seeking to subcontract the buildings to the city for use as a shelter or other institutional housing, saying the guaranteed rent from the city would afford them better security and maintenance. To simply turn the houses into two-family homes would involve a lengthy,  expensive battle through housing court.