Brooklyn politicians and communities are speaking out and hosting events to kick-off June’s Gun Violence Awareness Month. A number of events at different locations across the borough will take place this month with three major gatherings happening this Saturday, June 2.

The event has local and timely significance, especially after a Memorial Day Weekend plagued by shootings in Brooklyn. From NYPD Community Council meetings to neighborhood street corners, it’s common to hear a resigned acceptance of hot weather leading to more violence. Increasingly, though, that’s not the only response to the seemingly inevitable uptick.

“The tragic shootings this past weekend, and the coming summer months which historically result in increased violence, are a stark reminder that while awareness is important, it must then lead to action,” said Councilmember Jumaane Williams in a statement. “These trends are histories, not inevitabilities. By investing the resources necessary and committing the willpower required, we can combat the epidemic of gun violence that plagues our streets in New York and across the country.”

While New York is busy presenting itself as the “safest big city in America” behind historically low crime rates, gun violence remains a scourge on many Brooklyn communities.

On June 2nd, people everywhere are encouraged to wear orange in memory of those lost to gun violence. Here are some of the upcoming events for this weekend:

Youth Over Guns March
What: Hundreds are expected to turn out and wear orange for a protest march across the Brooklyn Bridge to Foley Square in Manhattan for a rally to end gun violence featuring student speakers
Where: Korean War Veterans’ Plaza, Tillary Street
When: 12:00 pm, Saturday, June 2
More information can be found at the organizer’s website or on the Facebook event page

Save Our Streets Brooklyn Fish Fry
What: A remembrance of those lost to gun violence and community fish fry put on by Save Our Streets (S.O.S.) Brooklyn, which operates in Crown Heights and Bed-Stuy
Where: 256 Kingston Avenue, Crown Heights
When: 1:00 pm, Saturday, June 2 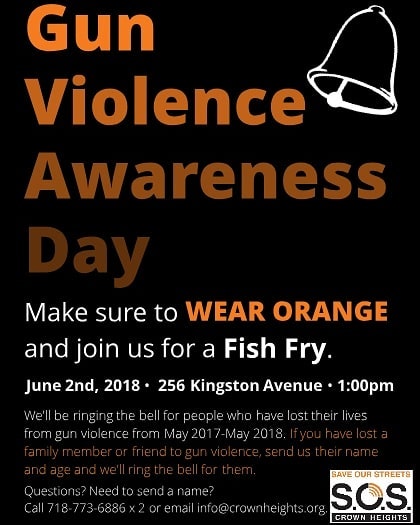 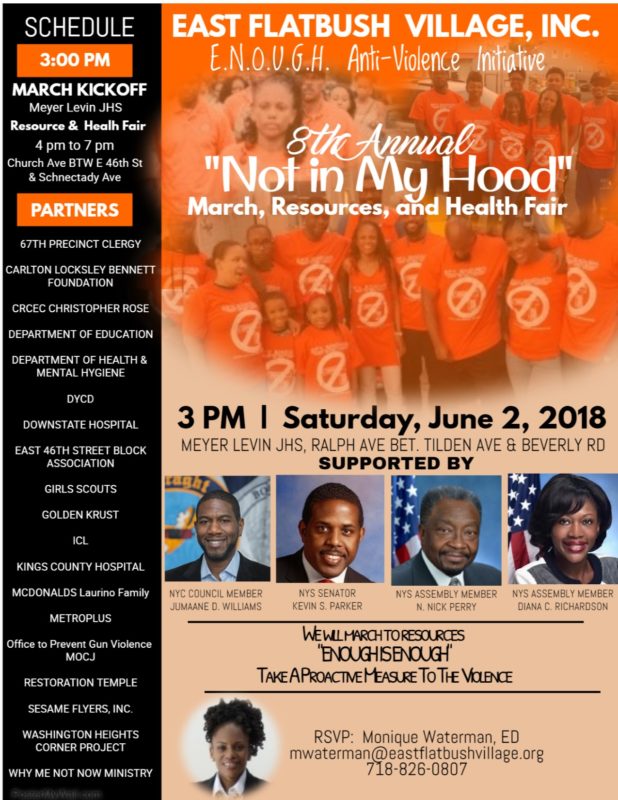 Observer's Arts Power 50 – Equity in the Arts: A Reckoning