WILLIAMSBURG – For over 130 years, the Italian community in North Brooklyn has been coming together every year for the Giglio Feast, a week-long religious celebration that involves the spectacular lift and procession of the eighty-foot-tall tower and statue of Saint Paolino

While the feast isn’t until July, tonight provides a great opportunity to see the history of the celebration at “The Giglio on Film” lecture in Williamsburg. Presented by Joseph Sciorra, PhD, a professor at Queens College, the talk tonight will feature newsreels and home movies of the feast dating back to the 1920s! 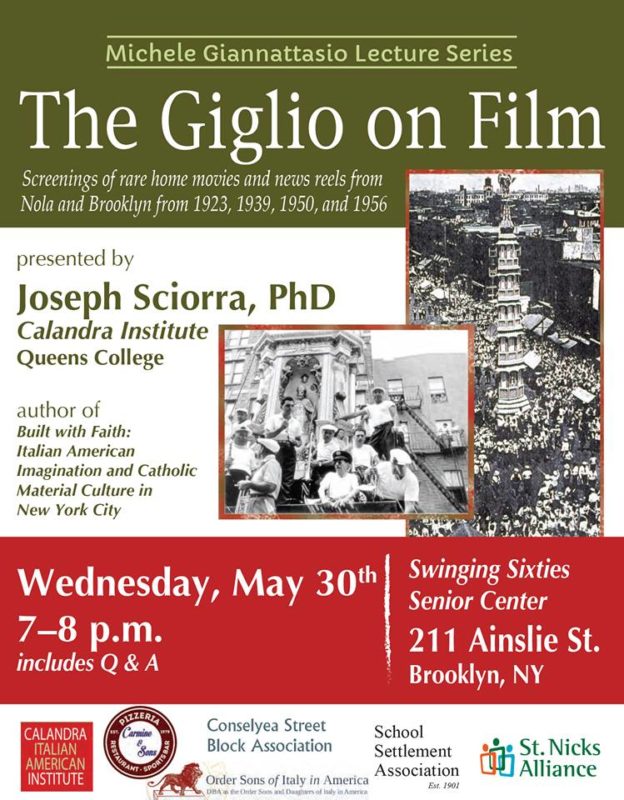 Sciorra has previously visited Williamsburg to give a talk on the history of religious processions in the neighborhood, which involve a number of different saints—but by far the largest festival and procession if the Giglio.

Presented by St. Nick’s Alliance in conjunction with a number of local organizations, the talk is free and open to the public.

Historical context is important, especially as the demographics of the neighborhood change. While the core of Italian-American Brooklynites remains and carries on the tradition, in recent years, the gathered crowds have trended away from mostly participants to include plenty of spectators, snapping pictures and marveling at the display.

Especially for the more recently arrived Brooklyn set, tonight’s event is a great opportunity to understand the history of the neighborhood and it’s inhabitants, beyond the general “it was cooler 10 years ago” vibe that dominates much of present Williamsburg discussion.

It might’ve been cooler indeed, but 100 years ago, the people that built the neighborhood and raised their families in it, whose generations still live on many of the same streets today, were practicing a celebration of religious faith and community that continues into the present. For many, tonight’s event is a trip down a familial memory lane, and for others, it’s an excellent opportunity to expand their worldview.

Observer's Arts Power 50 – Equity in the Arts: A Reckoning