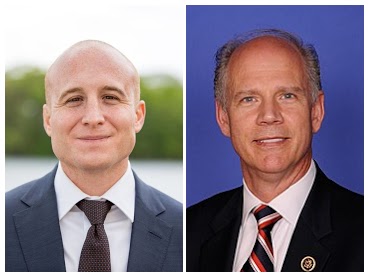 BAY RIDGE — Democratic nominee for the 11th congressional district, Max Rose, raised at least 90% of his contributions (of those larger than $200) from out-of-district donors, according to Federal Election Commission data analyzed by OpenSecrets.

Rose raised most of his money, just over a million dollars, from New York residents, outraising the incumbent Dan Donovan who raised $775,000 in New York. According to the latest FEC filings (June 3), Rose had raised a total of $1.95 million while Donovan raised $1.8 million.

OpenSecrets then drilled down to see how much of this money came from within the Congressional District 11, as opposed to outside the district. They used zipcodes from contributions of more than $200 from individuals, as reported to the Federal Election Commission, and excluded any money raised from Political Action Committees (PACs), which together explain the discrepancies in total amounts listed as raised.

Dan Donovan has raised almost $800,000 or 42% of the total from PACs this election cycle, according to OpenSecrets, while Rose has received about $120,000. These numbers include contributions from other candidate committees.

Donovan had also raised just over $40,000 of his funds from small individual contributions (under $200), while Rose had raised over $200,000 in small donations, that did not get counted by OpenSecrets to establish whether they came from within or outside District 11.

“Max Rose just moved to Staten Island, became Nancy Pelosi’s handpicked candidate for Congress and now his entire campaign is being funded by her wealthy San Francisco donors and the Washington liberals whose far-left values are completely out-of-touch with the residents of Staten Island and South Brooklyn,” said Donovan spokeswoman Jessica Proud.

The donation disparity gives pause to whether Rose has the support of a district who has voted Republican for nearly three decades, even if everyone else in New York may be rooting for him. Outside of a 2009 stint when the now-Staten Island District Attorney Michael McMahon (D) overcame a Republican “stand-in” filling in for Francis H. Powers who had died unexpectedly, the district has steadily voted Republican since 1993.

“The fact that only 4% of his donations have come from inside the district speaks volumes and is indicative of not only the strong support Congressman Donovan has from his constituents but that no one is buying Max Rose’s fraudulent candidacy.”

However, since his successful primary, Rose has flooded the streets of Bay Ridge and Staten Island with an army of volunteers looking to change the minds of more than 115,000 Republican and Conservative Party voters. The changing demographics in the Bay Ridge portion of the district could also factor into the race. And if the majority of those small donations come from within the district, Donovan’s grip may not be as strong.

A spokesperson from Rose’s camp shot back highlighting PAC and the recent Purdue Pharma donations the congressman accepted and then later donated to drug treatment programs in the district.

“This statement is rich coming from Purdue Pharma’s favorite congressman: Dan Donovan,” wrote Jennifer Blatus, spokesperson for Max Rose in an email statement. “Max Rose has said he will not take a dime from federal lobbyists of Corporate PACs and has raised over $170,000 from Staten Island and South Brooklynites.”

The spokesperson went on to say, “That may not seem like a lot compared to the half million dollars of contributions Donovan has taken from Purdue Pharma executives, federal lobbyists and Corporate PACs but this is what a grassroots campaign looks like.”

UPDATED 9/24 to correct that in two instances we had incorrectly reported contributions raised as out of State when we were referring to contributions raised outside the district. We also added a paragraph to better explain the methodology used by OpenSecret and its limitations.