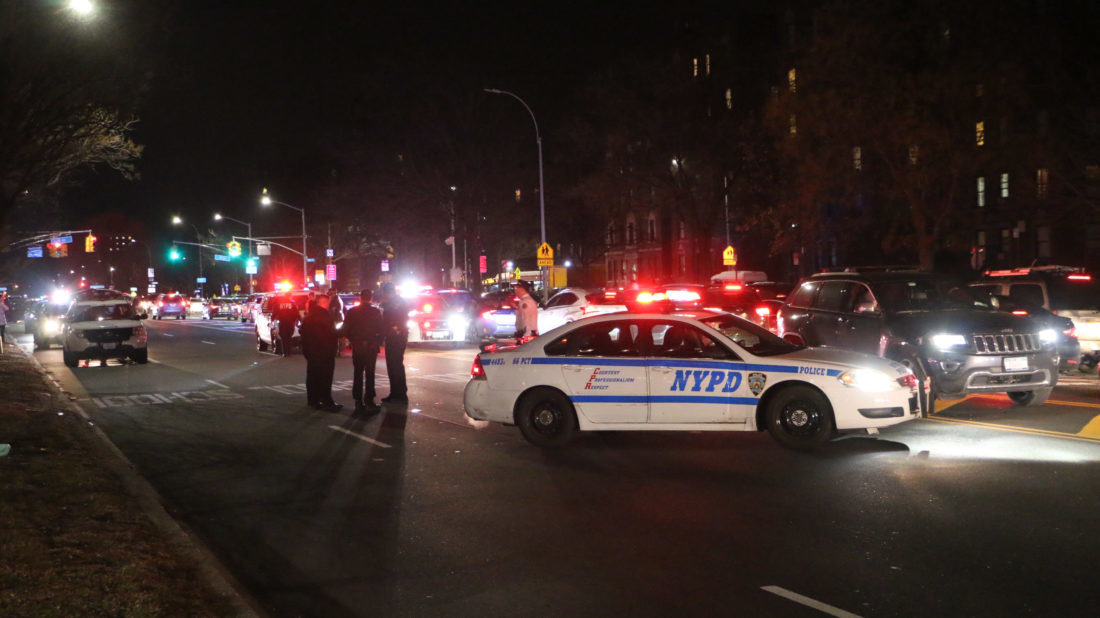 CROWN HEIGHTS – Two men shot at each other and missed—but struck a bystander instead. Now, police are trying to track them down.

The shooting took place in Crown Heights, near the intersection of Nostrand Avenue and St. John’s Place, around 10:45 pm on Tuesday, August 28, police said. Two unidentified men fired several shots at each other, missing their targets but striking a 25-year old bystander in the shoulder.

The suspects fled southbound on Nostrand Ave, police said, while the victim used private means to make it to Kings County Hospital, where he was listed in stable condition.

Surveillance video of the fleeing shooters can be seen below:

CYPRESS HILLS – A 22-year old man was beaten with a pipe and robbed after an early-morning confrontation in Cypress Hills last week.

The victim was involved in a verbal dispute outside with three men in the vicinity of Sheridan Avenue and McKinley Avenue, said police, on Wednesday, August 22, around 7:15 am. The argument turned physical and the suspects struck the victim with a metal pipe and punched him about the body.

Before they fled, the suspects stole the victim’s wallet. EMS transported the victim to Brookdale Hospital in stable condition. Surveillance video and photos of the suspects can be seen below:

EAST FLATBUSH – Police are looking for a suspect that pulled a snatch-and-grab on a straphanger’s phone at Flatbush Avenue station.

The victim was riding on a Manhattan-bound 2 train on Sunday, August 19, around 10:30 am, police said. The suspect grabbed the phone and fled toward Avenue H.

Surveillance video of the fleeing suspect can be seen below:

MIDWOOD – A serial burglar has been hitting locations around Ocean Avenue and Avenue O since July, police said.

Gaining entry to apartments and forcing open doors, the burglar has stolen thousands in jewelry, electronics and cash.

A surveillance photo of the suspect can be seen below:

WILLIAMSBURG – Finally, a vicious gang beating in Williamsburg has police searching for suspects caught on camera.

The incident occurred on Tuesday, July 31, just after 11:00 pm, when a group of men approached a 21-year old and 16-year old as they were standing outside 301 Keap Street. One of the suspects asked the victims if they were part of a gang, police said, before striking both victims in the head with a glass bottle. Other members of the group repeatedly punched and kicked the victims as well.

The crew fled the scene, leaving both victims beaten with lacerations to their heads. They were taken to Woodhull Hospital where they were treated at released, said police.

Surveillance video of the beating can be seen below:

Anyone with information in regard to any of the above incidents is asked to call the NYPD’s Crime Stoppers Hotline at 1-800-577-TIPS (8477) or for Spanish, 1-888-57-PISTA (74782).  The public can also submit their tips by logging onto the Crime Stoppers website at WWW.NYPDCRIMESTOPPERS.COM or by texting their tips to 274637 (CRIMES) then enter TIP577. All calls are strictly confidential.