Six Belt Parkway bridges, including four in the Sheepshead Bay area, will get a $6.8 million face lift by Fall 2011, says Mayor Michael Bloomberg.

The mayor made the announcement during the unveiling of the Stimulus Transportation Projects on Monday. The list of projects includes construction sites in all five boroughs, racking up a total price tag of $1.1 billion and, according to the administration, will keep or create 32,000 jobs. The projects are funded in part by $271 million in federal stimulus money for transportation projects.

The city is replacing the protective coating on the overpasses’ steel skeletons, an update expected to extend their lifespans by 20 years. Work on the rust and salt encrusted metal begins this spring and will also see the removal of the lead-based paint. The bridges involved are the Bay 8th Street, Cropsey Avenue, Sheepshead Bay Road, Ocean Avenue, Bedford Avenue, and 14th Street Pedestrian bridges.

In addition to these works in Sheepshead Bay, the city is pushing $15 million to continue renovating the Coney Island boardwalk. Planks along the historical walkway were torn out months ago, and empty spaces have remained. The spaces line many of the boardwalk’s restaurants and bars, worrying communities members over whether or not the establishments will open in time this season. In January, officials said the boardwalk would be restored by Easter, but with that date fast approaching little progress has been made. 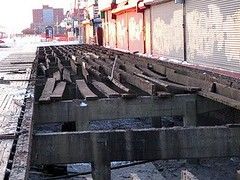 The injection of $15 million is expected to end the need for such “band-aid” repairs, instead favoring sustainable materials that have a lower carbon footprint, lower maintenance costs and will reduce future deterioration to unsafe conditions. Reconstruction work will take place from West 31st to West 37th Street, West 15th Street to Stillwell Avenue, and Surf Avenue / Ocean Parkway to Brighton 2nd. Construction will finish in Spring 2011.

Meanwhile, in Bath Beach a $14 million project seeks to reconstruct the 67-year-old access ramp to the Belt Parkway. The city says the work here will address deficiencies and substandard features, bring the bridge into compliance with current safety standards, reduce maintenance costs, and extend the useful life of the ramp. It will finish in Spring 2011.

[info via Gotham Gazette’s The Wonkster]