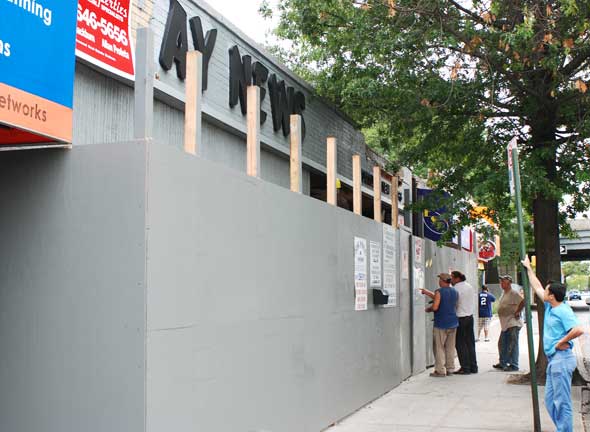 Okay, that headline is more about our love of alliteration than any groundbreaking story about construction follies. A partial Stop Work Order has been issued by the Department of Buildings, though, after testing found asbestos contamination on the roof – but work continues to move forward.

The order to limit demolition activities was made after a caller to the DOB complained on Monday about “debris flying all over the place. Scare of possible asbestos affecting neighboring properties,” according the department’s website.

The architect, Robert Polermo, said that a Department of Environmental Protection spot-check revealed the cancer-causing substance in a “little corner” of the roof. Polermo said that most of the structure is safe and asbestos-free, but that older portions of the roof date back to before the 70s, and this is likely where it was found.

Construction is allowed to continue on the interior, but the roof must be treated by a licensed asbestos removal team which the builder has already hired. Removal should happen some time this week, Polermo said.

The Department of Buildings has received a flurry of complaints about construction, though, all coming in this week. Aside from the initial complaint on Monday, four other complaints were filed, but inspectors found them to be unsubstantiated.

The building is slated for a September 2011 completion, and will feature a 70-foot, four story structure with retail and office space. A 68-car attended parking garage will be at the rear, and the neighboring storefront will be demolished to make way for driveway access.