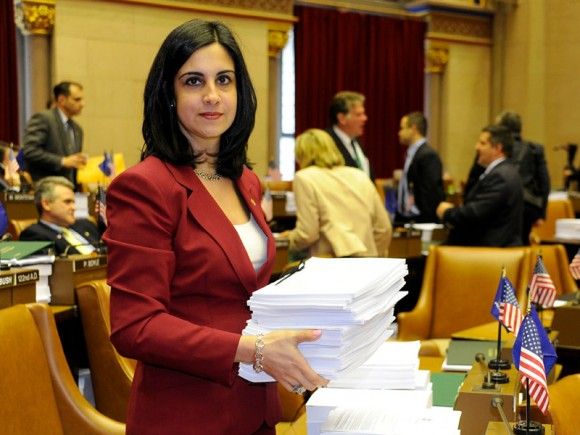 Assemblywoman Nicole Malliotakis announced the passage of legislation 5274-A, a bill she co-sponsored that would allow local governments to save money by cutting paperwork costs.

The measure would eliminate the requirement that hard copies of legislation be placed on the desks of elected officials prior to a vote, and will permit governments to save tax dollars and protect the environment by distributing bills electronically. The measure is consistent with a constitutional amendment passed by the Legislature in 2011 related to bills before state government, which is estimated to save taxpayers $13 million annually.

“Allowing local governments to go paperless is a common-sense solution for protecting both the environment and taxpayers,” said Malliotakis. “In the digital age, there is no reason that this Legislature should be required by law to print out thousands of pages of bills that could easily be distributed through electronic means. I thank Assemblyman Magnarelli for recognizing the benefits of this legislation and working with me in a bipartisan manner to take this necessary step toward fiscal and environmental responsibility.”

Malliotakis authored the legislation after a meeting with New York City Councilman James Oddo, in which he indicated the benefits that going paperless would hold for city government.

“As elected officials, we are stewards of taxpayer money, and I support efforts to cut unnecessary spending. In today’s digital age, the requirement to physically print and place legislation on the desks of lawmakers is archaic and wasteful. This legislation is environmentally friendly and makes sense,: said Oddo.

The bill is part of Assemblywoman Malliotakis’ push to reduce government’s carbon footprint, as well as its use of tax dollars.

Lots of stuff this week, including another Special Election, two parades, food with a side of politics and so much more.