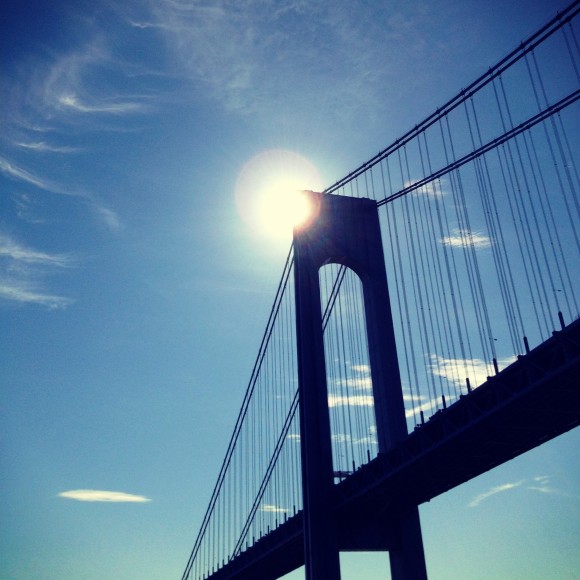 Opened on November 21, 1964, the Verrazano-Narrows Bridge celebrates its 50th anniversary this week, so we’re honoring the occasion by looking at some of the statistics, quirks, and interesting bits of info that make up the massive crossing’s history. From parachuting off its tower, to a cameo in Saturday Night Fever, to nearly 22 dozen light bulbs, here are 25 things you may not have know about the bridge.

1. It could have been a tunnel, instead. The original discussion for crossing the Narrows began in 1888 — but that was for a tunnel. After a bridge was proposed and the design nixed, they went back to the tunnel idea, and actually began digging. The abandoned tunnels, which only went 150 feet but still remain, were nicknamed “Hylan’s Holes” after then-Mayor John F. Hylan, who championed the failed project. It went back and forth between tunnel/bridge until talk about a bridge, under the recommendation of Robert Moses, became serious in 1946.

5. About 7,000 people were displaced in Bay Ridge to make room for the bridge, including dentist Henry Amen, whose office was leveled, but who found a new one nearby — he is still practicing there today at age 88.

7. About 12,000 men worked on its construction, and three men died in falls. Workers walked off the job for four days, demanding safety nets, which they got, and which, afterward, caught and saved three more workers who also fell. None of the workers were invited to the opening; instead they attended a mass for the three victims.

8. Nobody is buried in the structure’s foundation, like they claim in Saturday Night Fever. In the film, the bridge symbolizes freedom and a better life…in Staten Island. The film was released 20 years after the groundbreaking of the bridge — that year, 1959, the population of Staten Island was 220,000; by 1980, it was 352,000, so Tony wasn’t alone in these thoughts.

9. The first driver to cross the bridge wore a rented tuxedo and piloted a “pale blue Cadillac convertible with flags flapping from the fenders,” nabbing the distinction because he had parked behind the Staten Island toll for a week, guaranteeing the position.

11. Because large cruise ships must pass beneath it to get to the port of New York and New Jersey, they have to take clearance under the bridge into account when designing ships. The Queen Mary 2 was described as “a bit dumpy” because of that height consideration in its design.

13. The lower deck did not open at the same time as the upper deck. When traffic demand grew beyond projections, work to open the lower level accelerated, and instead of opening it in 1975, it opened in 1969.

14. The toll is only one-way largely because of air pollution. After the bridge opened, traffic began backing up on Staten Island, and residents complained about the air quality, leading to a change in the toll collection in 1986, which is also the same time Staten Island residents began getting a discount to cross the bridge.

15. Animals sometimes disrupt traffic on the bridge. A few examples: This year two deer shut down traffic on the bridge for about 10 minutes. In 2011, truck drivers coordinated to stop traffic after a jerk threw a kitten out of a moving car; the cat was okay, though, and is living the good life with Whoopie Goldberg. In 2009, an injured Canada goose that escaped from the nearby Poly Prep campus held up traffic for about half an hour.

16. But animals don’t always get in the way on the span — some make the bridge their home. Like these peregrine falcons.

17. The roadway of the bridge is 12 feet lower in the summer than in the winter because of thermal expansion.

19. It has 262 lights, which, as of 2009, are all LED bulbs — those were installed four years before the city announced plans to use LED bulbs in all its street lights.

20. Despite efforts to discourage it, the bridge is often the site of suicides and suicide attempts — as of January of this year, it’s been the scene of at least eight suicides and six more attempts since December 2011. The MTA has installed signs and phones — with the idea they’ll be used to call suicide prevention hotlines — along the span in an attempt to stop potential jumpers, but they do not have plans to install fencing, which has been shown to be an effective deterrent on other bridges.

22. The bridge was scorched after a fully-loaded oil tanker, the Esso Brussels, and a container ship, the Sea Witch, collided in the middle of the night on June 1, 1973. They became entangled, crude oil caught fire, and the two ships were propelled by the still-running engines of the Sea Witch through the Narrows, passing below the bridge — scorching the bridge 228 feet above, which managed to merely close the lower deck for two days — before running aground in Gravesend Bay. Tragically, 16 men lost their lives in the collision.

23. Sometimes because of the weather, runners in the New York City Marathon, which has started from the Staten Island side of the bridge since 1976, strip off so many pieces of clothing on the first stretch across the suspension that organizers have to “literally plow them into piles.”

24. In 1982 John Carta was charged with “illegal parachuting” and more after he made a 16,000-foot jump and landed on a tower of the bridge, where he switched parachutes and then jumped again, this time to the water below, where police were waiting for him.

25. Yes, the name of the bridge is missing a Z. The spelling of the name of Giovanni da Verrazzano, the Italian navigator credited as the first European to explore New York Bay, was, at the time, advocated by some Italians as having two Zs, but apparently then-Governor Nelson Rockefeller preferred the single Z, sometimes called the American spelling of it. These days, many businesses in the area use the spelling with the single Z in their names.