Acadia Realty, a partner in the enormous Sheepshead Bay Station Plaza development adjacent to the train station platform, has posted floor plans of the mega-establishment on its website. The plans reveal a 16-story residential tower perched on top of four floors of retail, a one-story parking deck and a floor of office space. 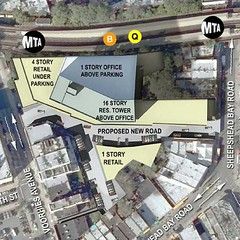 If the plans become a reality, the 22-story Sheepshead Bay Station Plaza will stand far taller than any other building in the area, with the Sheepshead Bay train station platform nestled in its shadow.

The website shows that the residential lobby will be on the ground floor on the side closest to Voorhies Avenue, but does not indicate the number of dwellings or inhabitants. The apartment tower will sit directly above an office, which itself is above an 89-space parking deck. The four-floors of retail below is topped off by a fitness center and a community facility. Outside of the main building, a private street is planned that includes an estimated 650 parking spaces and an additional small retail building. In addition to Acadia Realty, the project is being built by PA Associates and GreenbergFarrow.

You may remember Station Plaza from when we revealed the artists sketches last July. The drawings brought a lot of attention, sparking a debate on whether the size, style and function of the building was appropriate in Sheepshead Bay. At that time, the drawings depicted a building only four stories tall.

Christopher Conlon, Acadia’s senior vice president of acquisitions and leasing, told Sheepshead Bites by phone that the plans are not concrete.

“We don’t have a current plan for that project,” he said. “We have many, but nothing we’ve decided to move forward with.”

Conlon also noted that no tenants have been signed, and a date to begin construction has not been set.

Though Conlon insisted that the plans on the website may have been outdated, Acadia has since updated its website to reflect a new leasing contact and to remove an erroneous tenant list. The floor plans remain, and a property brochure for potential tenants has been added. The brochure includes the plans with the residential tower.

When we last heard from the Station Plaza developers, we were told that the drawings were just “someone’s thought process.” Carolyn Malinsky of PA Associates stated, “I am committed to nothing.” Though Conlon’s remarks suggest that the situation hasn’t changed much, the fact that Acadia is actively marketing these designs to potential tenants may reflect their intentions to go with something closely based on the plans.

If that’s the case, then Acadia and PA Associates should come out and say it. No matter your views on development in Sheepshead Bay, a retail and residential complex of that size is going to generate a lot of problems with parking, transportation and other infrastructural issues. Acadia and PA need to work with community leaders to make sure we all benefit – or at least don’t suffer – from their ambitions.