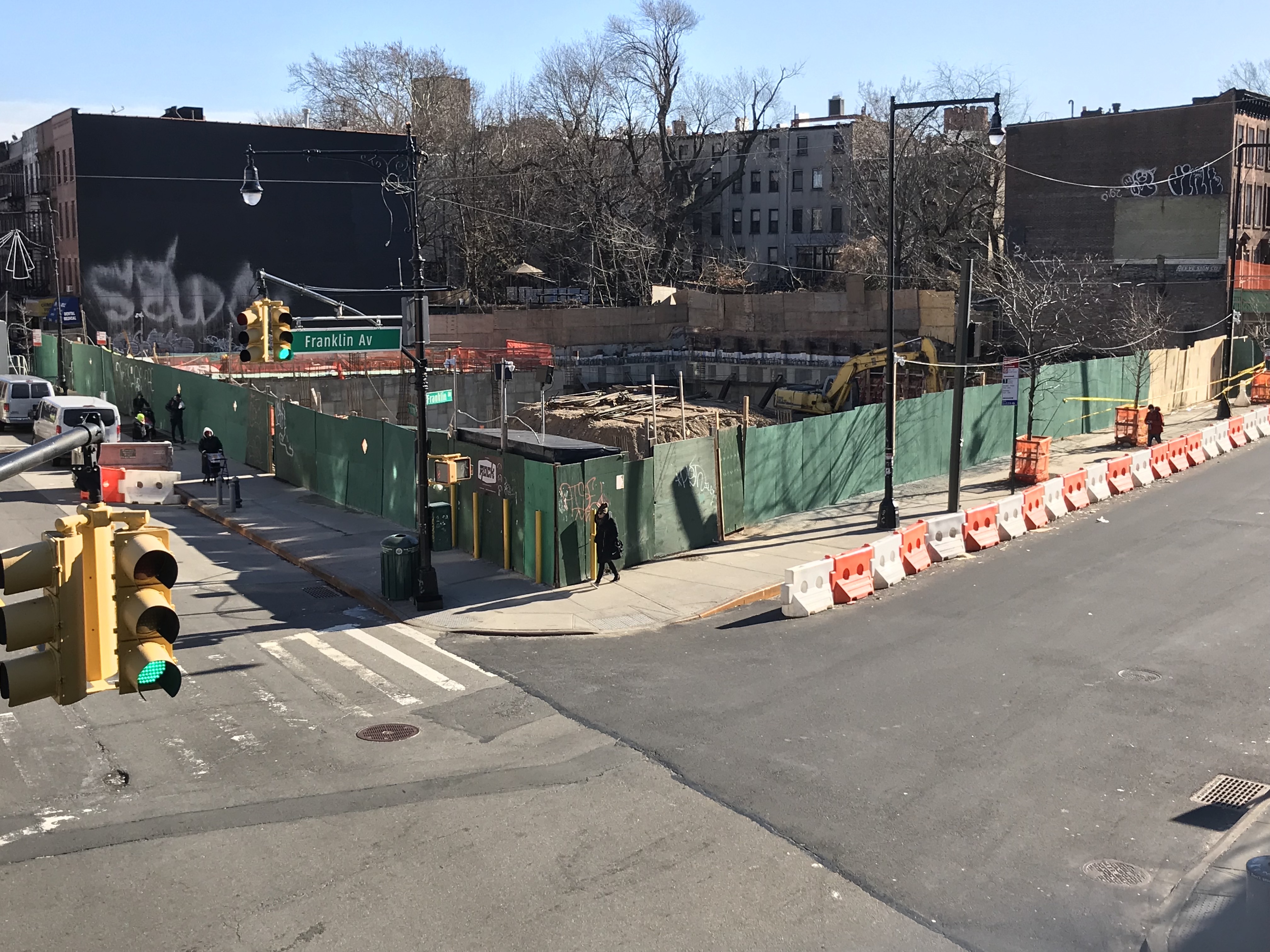 BEDFORD STUYVESANT – The dusty cavity below the Franklin Avenue shuttle train station in Bedford Stuyvesant is beginning to show signs of progress –– three and a half years after developer Joseph Brunner purchased the property for $19,000,000.

The building was originally proposed as an 8-story, mixed-use project at 1134 Fulton Street, at the corner of Franklin Avenue. It was supposed to have 116 apartments, over 18,000 sq. ft. of commercial space and a 72-car attended underground parking garage, according to the most recent Department of Buildings (DOB) approved permits.

Karl Fischer is the architect on file, and has submitted plan revisions proposing to add two more stories and 66 additional residential units and one extra parking spot.

Developers met with the Housing and Land Use Committee of Community Board 3 on Dec. 13, 2017 to present a voluntary inclusionary housing plan, according to District Manager Henry Butler. At the meeting, developers presented plans that indicated 37 of the 182 residential units would be dedicated to affordable housing, only 20% of the entire residential space. DOB has not yet approved the revised plans.

While construction is underway now, there was a yearlong lull during part of 2016 and 2017. Neighbors say the halt occurred because of some structural damage the work was imposing on neighboring properties.  During that time the property drew several violations, two of which were for failure to provide a clear walkway for pedestrians according to DOB reports. At the time DOB noted the site was not active.

“Residents in the neighborhood have mixed feelings about the development,” said Elisa Holland, 43, who has lived in the area for eight years. Holland said some residents are interested in taking advantage of the new parking opportunities that will come with the new development, yet some worry about increased gentrification that tends to result in skyrocketing rents.

Those mixed feelings extend to the areas retail outlets as well. Some residents welcomed the replacement of the often-condemned Key Food with a new grocery store.  But when residents met with developers on Sept. 12, they were told that a Starbucks and a pet spa would occupy the commercial space instead.

Rico Davis, 42, who works at the Big Apple Cigar & Smoke Shop previously located close to the intersection of Franklin Avenue and Fulton Street, said he noticed the decline in business after being forced to relocate halfway down Fulton Street in 2015.

“Location is always number one in business anyway,” said Davis. “Once we moved to the middle of the block away from the corner that has a bus stop and two train stations we saw a decline in at least a third of the business.”

Joel Weiss of Empire Management & Construction did not return several calls for comment.