This final week of September offers lots of fun things to do, including film screenings, the Chile Pepper Fest, and the Shop Black Pop-up.

Don’t forget to check out the first annual Brooklyn School Gardens Crawl on Saturday where ten District 15 schools from Red Hook to Kensington will welcome guests into their gardens for a day of family-friendly activities.

Looking for something to do tonight? You can dance the night away while supporting Imani House (see below) or head to BAM to check out Pop-Up Magazine, a “live magazine” show produced “for a stage, a screen, and a live audience.”

Check the BKLYNER Calendar for more events happening around town or to list one of your own. 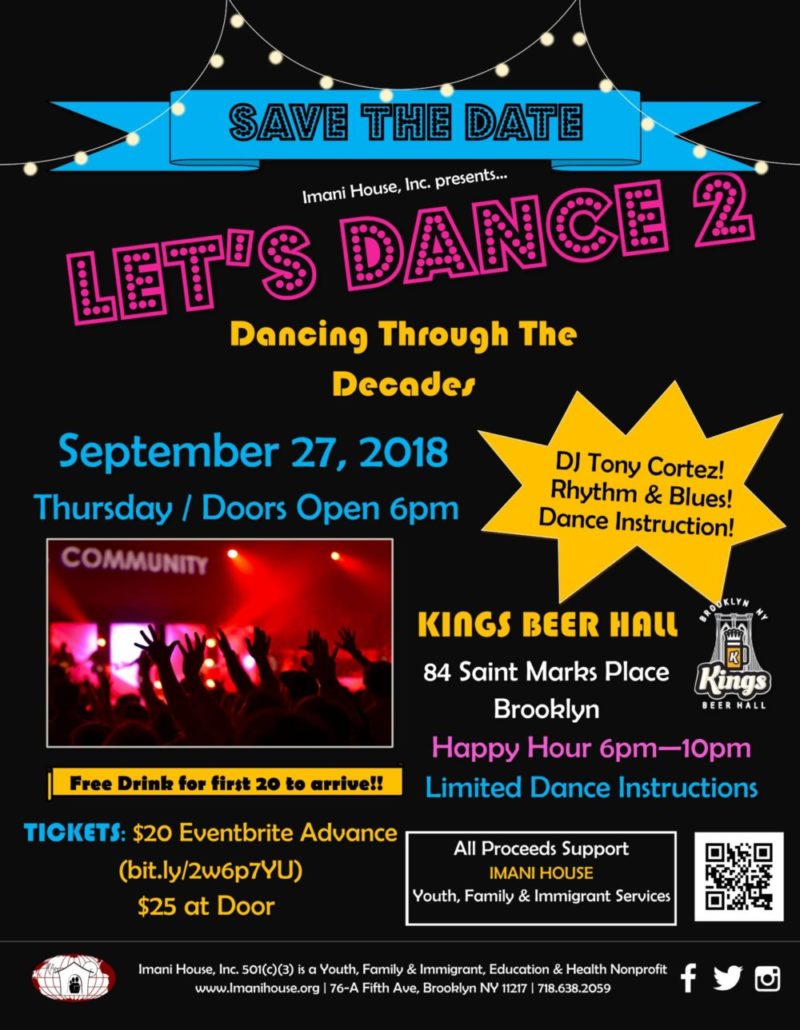 Let’s Dance 2: Dancing Through The Decades
When: Thursday, September 27, 6pm to 10pm
Where: Kings Beer Hall, 84 Saint Marks Place, Park Slope
What: Get the weekend started by dancing to retro R&B, Salsa, and contemporary hits while supporting Imani House’s free youth/family/immigrant education and health programs here in Brooklyn and in Liberia, West Africa.
How Much: Tickets $20 in advance, $25 at door

Tear a Root from the Earth (work-in-progress)
When: Friday, September 28, 2pm & 7pm
Where: BRIC House Artist Studio, 647 Fulton Street (enter on Rockwell Pl), Fort Greene
What: This new work features both American and Afghan folk music to tell the story of three generations of an Afghan family as they navigate the American and Soviet invasions of Afghanistan.
How Much: Tickets $8 in advance, $12 day of show

The Great DUMBO Drop 2018
When: Friday, September 28, 4pm to 9pm (DUMBO Drop at 6pm sharp)
Where: Washington Street (corner of Washington & Water Streets), DUMBO
What: For a second year, organizers of the Washington Street Block Party will send thousands of parachuting toy elephants from the rooftops of Washington Street, Brooklyn’s most photographed block. Each pachyderm will don a 2018 limited-edition parachute designed by Dumbo-based artist Craig Anthony Miller. Elephants can be “adopted” for $20, and the owners of elephants that most closely reach a designated target will win prizes! #DUMBODROP raises funds for DUMBO’s local Title 1 Public STEAM Schools, PS307 Elementary School, and the Dock Street Middle School. The event will also feature music, performances, and an afterparty at 8pm at the DUMBO Archway. 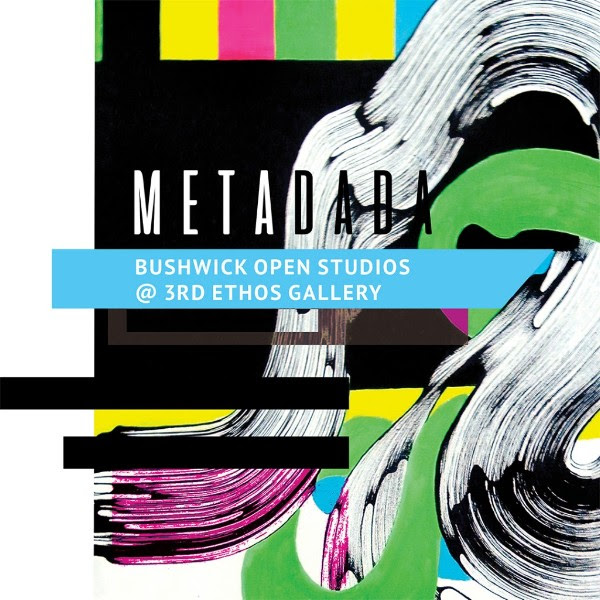 MetaDada – Pop Up Exhibit
When: Friday, September 28 through Sunday, September 30 (opening reception Friday 7pm to 12am)
Where: 3rd Ethos Gallery, 154 Knickerbocker Avenue, Bushwick
What: This pop up exhibit based on new work by Brooklyn-based artist and muralist Morgan Winter, is a “series of exercises in technical absurdity” that allows visitors to experience MetaDada in the physical and digital realms through augmented and virtual reality.

Two Special Events For The Final Week Of The Emperor
When: Friday, September 28 at 9pm and Sunday, September 30 at 2pm
Where: Theatre for a New Audience, Polonsky Shakespeare Center, 262 Ashland Place, Fort Greene
What: Theatre for a New Audience presents two special post-performance events for the final week of The Emperor, an adaptation of Ryszard Kapuściński’s 1978 book about the downfall of Ethiopian emperor Haile Selassie starring Kathryn Hunter and Ethiopian musician/founder of Krar Collective, Temesgen Zeleke. On Friday, Sept. 28, Zeleke will perform a post-show concert (9pm, $15) and on Sunday, Sept. 30, there will be a TFANA Talk with NYT Op-Ed contributor Bianca Vivion Brooks on representation in the arts (following 2pm show, free).
How Much: Tickets for The Emperor $90-$115

Riverhead Pop-Up Reading Room
When: Saturday, September 29, 1pm to 4pm
Where: Brooklyn Bridge Park, Pier 3
What: Riverhead Books hosts this open-air, thematically curated pop-up reading room honoring Banned Books Week. Celebrate the freedom to read with featured books and authors from the Riverhead collection that have been challenged in schools and libraries around the country, or address themes that inspire discussion, including Khaled Hosseini’s novel The Kite Runner and Garrard Conley’s memoir Boy Erased.

12th Annual Shop Black Pop-Up Bonanza
When: Saturday, September 29, 1pm to 7pm
Where: Nicholas Brooklyn, 1396 Fulton Street, Bed-Stuy
What: Support black-owned small businesses at this free, day-long, community event that will feature a variety of vendors, entertainment, and snacks while you shop! 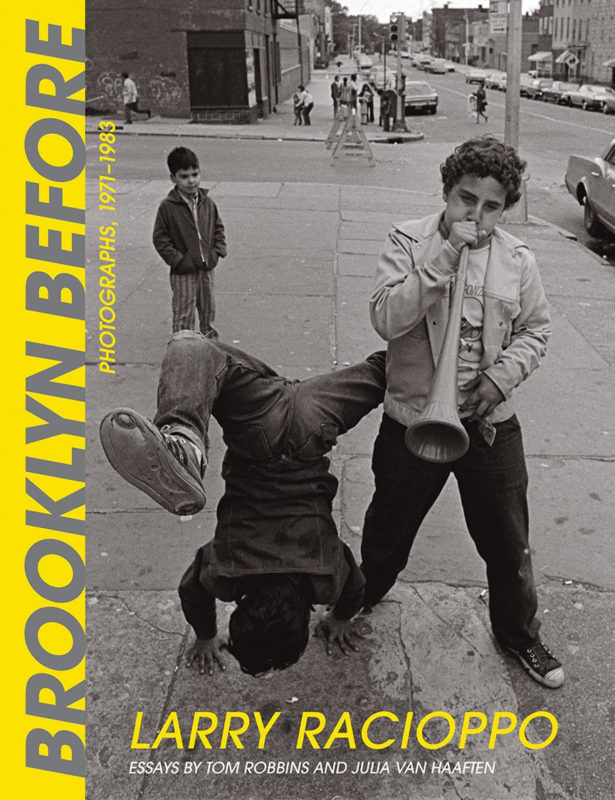 Brooklyn Before: Photographs, 1971-1983 by Larry Racioppo
When: Exhibition on view from Saturday, September 29 through Saturday, October 27 (opening reception and book signing, Saturday, Sept. 29 from 3pm to 5pm)
Where: Tabla Rasa Gallery, 224 48th Street (between 2nd & 3rd Avenues), Sunset Park
What: This exhibition showcases a selection of South Brooklyn photographs culled from the pages Larry Racioppo’s new book, Brooklyn Before, featuring new digital prints of the artist’s earliest 35mm and 120mm black and white negatives shot of family and neighbors.

Daily Vase: New Works From Alison Owen
When: Exhibition on view from Thursday, September 6—Sunday, October 14
Where: Greenpoint Hill, 100 Freeman Street (at Franklin Street), Greenpoint
What: At the start of 2018, artist Alison Owen began creating a vase for every day of the year—traditional clay vessels, fabric interpretations, paper collages. Her only requirement for the project was that the daily artwork incorporate a vase in some way. Her works are made using items found at other artists’ studios, on the street, or from her daily life. This exhibition displays selections from her project to date.

For Which It Stands—A Contemporary Art Exhibit
When: Exhibition on view Thursday, August 23 through Sunday, October 14, Fridays 3pm to 6pm or by appointment
Where: The Old Stone House, 336 3rd Street (between 4th & 5th Avenues), Park Slope
What: The Old Stone House presents this contemporary art exhibition that connects Brooklyn’s revolutionary history to some of today’s most pressing issues. Artists reinterpret and offer their “fresh take on the flags of the American Revolution and today, including the contradictions inherent in their symbolism.” On Sunday, September 30, from 4pm to 6pm, join The Old Stone House for “Community Flag-Making for the World We Want to See.” Interference Archive hosts the hands-on art project led by teaching artists Josh MacPhee and Monica Johnson. Learn more here.

Stars In The Night
When: Thursday, September 13 through Sunday, October 14
Where: Locations across DUMBO
What: Firelight Collective presents a four-week limited run of STARS IN THE NIGHT, an interactive and immersive theatrical production that takes audiences to multiple locations across DUMBO’s historic waterfront district. The original story brings twelve audience members on a journey through four locations, including the Empire Stores as well as living spaces, “to witness the fallout when a woman suddenly goes missing.”
How Much: Tickets $125

PÒTOPRENS: The Urban Artists of Port-au-Prince
When: Exhibition on view from Friday, September 7 through Sunday, November 11
Where: Pioneer Works, 159 Pioneer Street, Red Hook
What: More than 20 artists working in Haiti’s capital will be presented in this exhibit featuring sculpture, photography, and film, as well as a garden installation of a recreated Port-au-Prince barbershop.
How Much: Free

Mary Mattingly: What Happens After
When: Exhibition on view from Thursday, September 13—Sunday, November 11
Where: Gallery at BRIC House, 647 Fulton Street (enter at Rockwell Place), Fort Greene
What: BRIC presents an exhibition of work by Brooklyn-based artist Mary Mattingly, who creates photographs, sculpture, and large-scale public art projects that address climate change by “drawing connections between the social and economic forces that make up the current political ecology impacting our environment.” A deconstructed and redesigned 19,000-pound military cargo truck will be on display, encouraging viewers to question: “What happens when an object that embodies both the systemic violence represented by war and by climate change is manifested in a public space?”

Morbid Anatomy at Green-Wood
When: Saturday, September 22 through Sunday, December 2, Saturdays and Sundays from 12pm to 5pm
Where: Green-Wood Cemetery, Fort Hamilton Gate House (enter at Fort Hamilton Parkway and Micieli Place)
What: Morbid Anatomy returns to Green-Wood Cemetery for a second residency featuring an expanded library collection and the exhibition Bridging Worlds: The Land of the Living and the Land of the Dead which explores how different cultures envision the afterlife and attempt to communicate with the dead.