WILLIAMSBURG – Police are looking for the robber who followed a woman home after the 4th of July before snatching her purse.

Around 12:35 am on Thursday, July 5, the suspect trailed a woman home to her apartment in the area near Cook Street and Graham Avenue, said police. With a t-shirt over his face, he crouched and waited while the woman unlocked her front door before pouncing, grabbing her purse.

In the video, you can see the struggle over the purse send the woman flying from her stoop, where she slammed into a parked car. The 30-year old suffered bruising to her face and chin, said police. The thief managed to get away with $200 cash, the victim’s cell phone and 5 credit cards.

Video surveillance of the incident can be seen below:

BED-STUY – After a man fired a gun towards a group of people outside a Bed-Stuy deli, police are on the hunt, looking to charge the suspect with reckless endangerment.

The incident took place outside Shorty’s Deli, on 258 Marcus Garvey Boulevard, at Lexington, around 2:50 pm on Tuesday, July 3, said police.

The suspect fired at the group multiple times before fleeing northbound on foot, said police. Thankfully, no one was injured in the shooting. Surveillance video of the suspect can be seen below:

DYKER HEIGHTS – After a burglary in Dyker Heights, police are hoping to identify a suspect from surveillance video of the man casing the house.

The burglary took place just after midnight on Sunday, July 1, in the vicinity of Bay Ridge Avenue and 14th Avenue, said police. The suspect entered the home through an open bedroom window.

However, the house was occupied—three residents woke up when they heard the suspect, who subsequently fled with a couple iPhones and an iPad. Surveillance video can be seen below:

BROWNSVILLE – A dispute over misplaced money in a Brownsville salon led to a spicy confrontation late last month.

On Friday, June 29, a customer and an employee at Fatima’s African Hair Braid salon, 18 Belmont Ave, got into a verbal argument over money that was lost inside the store, said police.

The suspect left the store, only to return with mace, and subsequently pepper-sprayed the employee in the face, said police. The attacker fled toward Rockaway Avenue. Surveillance photos can be seen below:

PROSPECT LEFFERTS GARDEN – After an assault on an MTA train conductor at the Prospect Park Q stop, police are asking for the public’s help in identifying the perpetrator.

The 60-year old motorman was bringing the 1101 Q train out of 96th Street into the Prospect Park station just before noon on Tuesday, June 19, said police. After opening the doors of the southbound train to let passengers off, the victim opened his window to check the track—when he was punched in the face by an unknown assailant.

The blow knocked the 60-year old man unconscious, causing him to fall to the ground, scraping his face, said police. He was treated for his injuries at Kings County Hospital. The suspect exited the station and headed down Flatbush Avenue—surveillance footage of the man can be seen below:

GRAVESEND – Police are looking for a pair of scammers that used a stolen credit card to purchase electronics at a Best Buy in Southern Brooklyn.

On Saturday, June 16, the duo entered the Caesar’s Bay Best Buy in Gravesend around 2:30 pm, using a woman’s stolen credit card to buy a pair of Apple Watches, said police.

A surveillance photo of the two can be seen below: 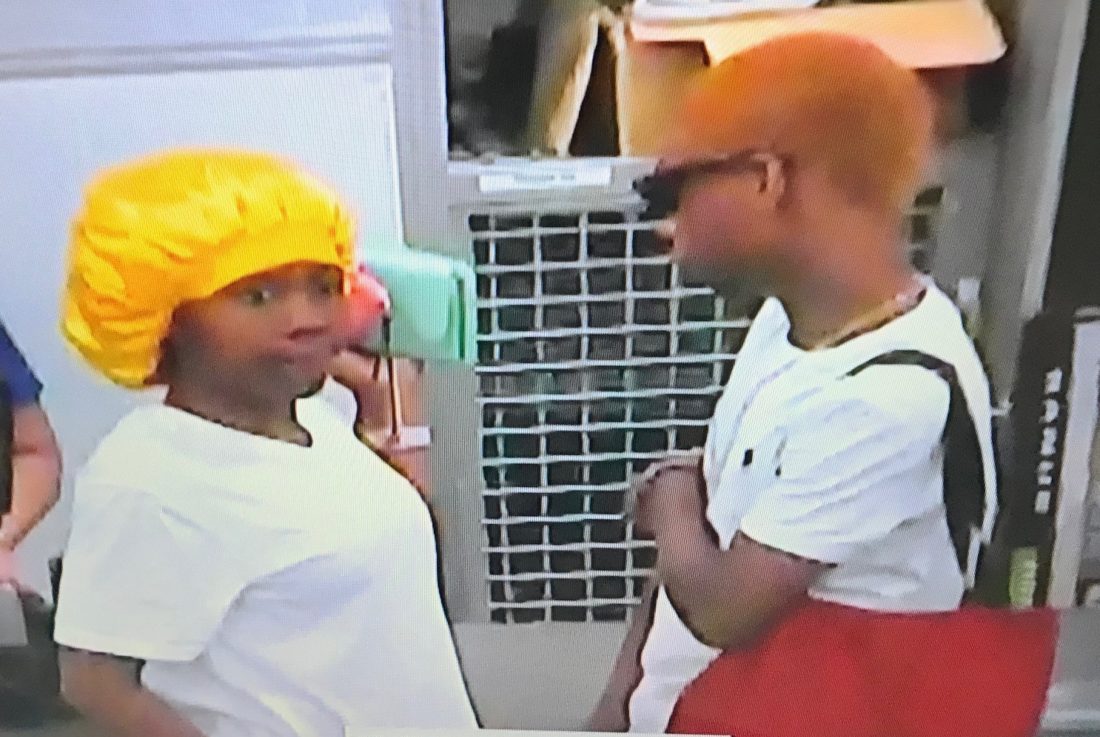 Anyone with information in regard to these incidents is asked to call the NYPD’s Crime Stoppers Hotline at 1-800-577-TIPS (8477) or for Spanish, 1-888-57-PISTA (74782). The public can also submit their tips by logging onto the Crime Stoppers website at WWW.NYPDCRIMESTOPPERS.COM or by texting their tips to 274637 (CRIMES) then enter TIP577. All calls are strictly confidential.