Those of you unfamiliar with Kasia’s prior work might have assumed from her Open Corner posts that she’s a rabid collage artist. In a way, she is, but the medium she usually deals in is words. For her final contribution here, she’s returned to wordsmithin’ with a piece for cyclists and Coney Island Avenue-crossing daredevils everywhere.

Check back in June for another month of The Open Corner! 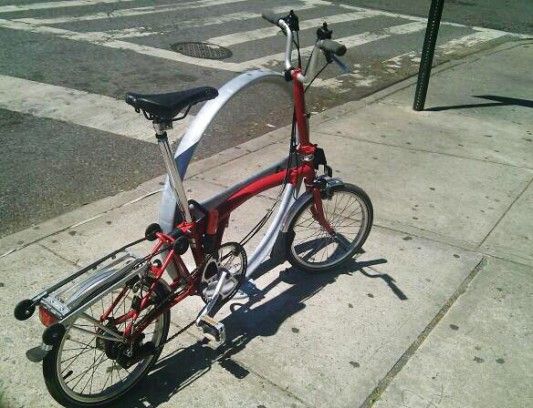 You cross Coney Island Avenue to George’s Diner. The light is too short. It starts blinking before you are halfway to the other side. The City sent a man to this intersection once; he decided the light is long enough. The City put this to you in writing. “And I can smell the sea on Cortelyou,” you wrote back.

Mrs. Taylor and she says: Don’t tell me, let me tell you.

In some ways you are still running with residual delays following that incident. When you try to sleep at night, it happens to you again on the backdrop of your eyelids. Your body is struck; knocked flat like a sapling. Mornings, you think you wake by the sea, but it is only Ocean Parkway awash in rain and car wheels.

Mrs. Taylor and she says: If you want something done about the matter, I will do it for you in a hurry.

You ride down the swarm streets under the cathedral of trees, with rhubarb sticking out of your basket. You are going to make jam. You see the bicycle rack in front of George’s, marking the spot where you got hit by a car four years ago. It is a small thing, but meaningful; it closes the circle, almost.

Mrs. Taylor and she says: I am a surefire woman.

Many thanks to everyone who commented on last week’s collage, which is about how Ditmas Park, for me, is a place that marries city and country. “Мир тесен” (“Crowded world”) is something Russians say when they unexpectedly run into someone they know, say, at the greenmarket on Cortelyou. The head and shoulders of Tsar Nikolai II comes from the packaging of my favorite black tea: the Tsar, with the trademark symbol hovering like an asterisk over his head, is a reminder of the Old Country. The old-fashioned wallpaper motif comes from a St. Germain and serves as a Victorian trim. The woman on the right, a dancer in the Bolshoi Ballet who performed in New York one year, symbolizes me as I behold all this.

In Life of Birds, a British documentary series that my husband and I have been watching, there’s a theory about why birds sing so mightily at dawn: there is nothing to eat yet, so they might as well sing. And also: they sing to see who among their neighbors will sing back. Apropos that: it has been great fun singing here on Ditmas Park Corner, and listening for who sings back. I started off a month ago with a swarm of words. Then I dabbled in dreams and took you inside the book-drop slot and back out into the crowded world. I leave you this week with a prose poem: this goes out to everyone in the neighborhood who rides a bicycle. If you are wondering, Mrs. Taylor is a “spiritualist” who advertises on the Q train.

Kasia Nikhamina writes The Mayor’s Hotel, a creative prose blog that has been mistaken for a real hotel by at least one well-intentioned Italian.

Kasia’s first play, Redbeard & Domicella, appeared at the Brick Theater in 2010. She is working on a new play, Nixon out of office, and “Pícaro,” a coming-of-age story. Her work is often performed at Hearth Gods, a reading series in the East Village.

She was born in Kalisz, Poland, but has lived in New York since she was five. She and her husband, Ilya, moved to Ditmas Park about five years ago.

What is The Open Corner? Find out here.