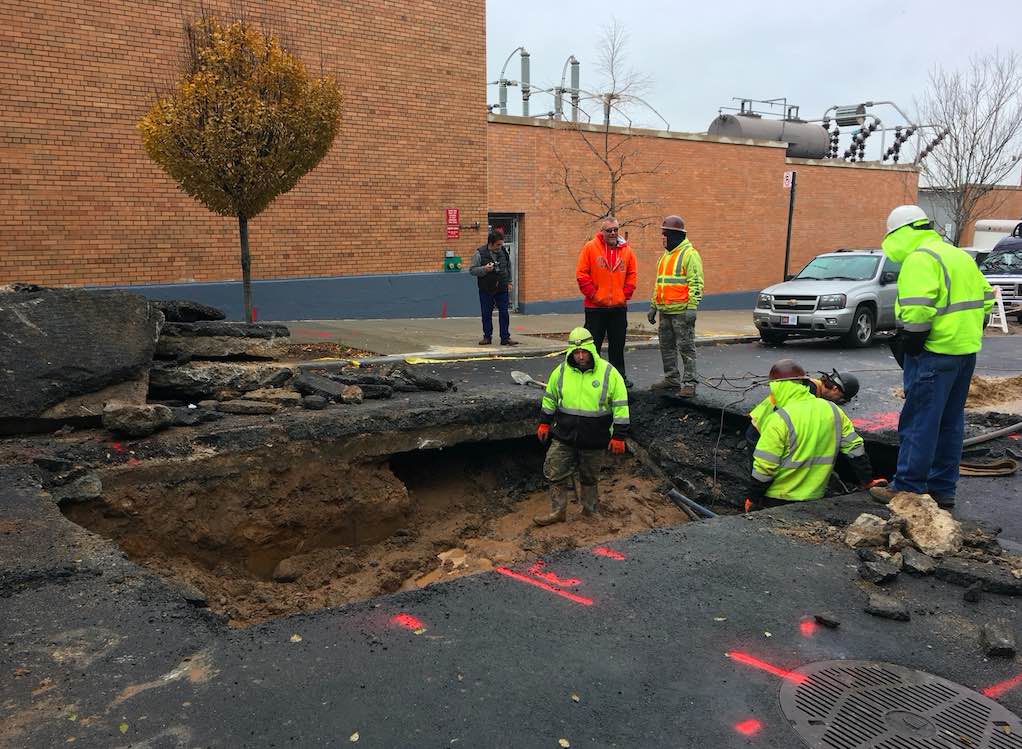 A bus sustained damage from this sinkhole located at 23rd Street between 5th and 6th Avenues. (Photo by Josh Sobel, partner and chef at Southside Coffee)Luckily the kids had already been dropped off. A massive sinkhole — sizable enough to swallow a car2go for dinner — opened up on 23rd Street

Screenshot of News 12 report.City officials from the Office of Emergency Management and the Department of Environmental Protection visited Borough Park on Sunday morning after a large van was partially sucked into a sinkhole. The van was parked on 39th Street and New Utrecht Avenue, where it sank through 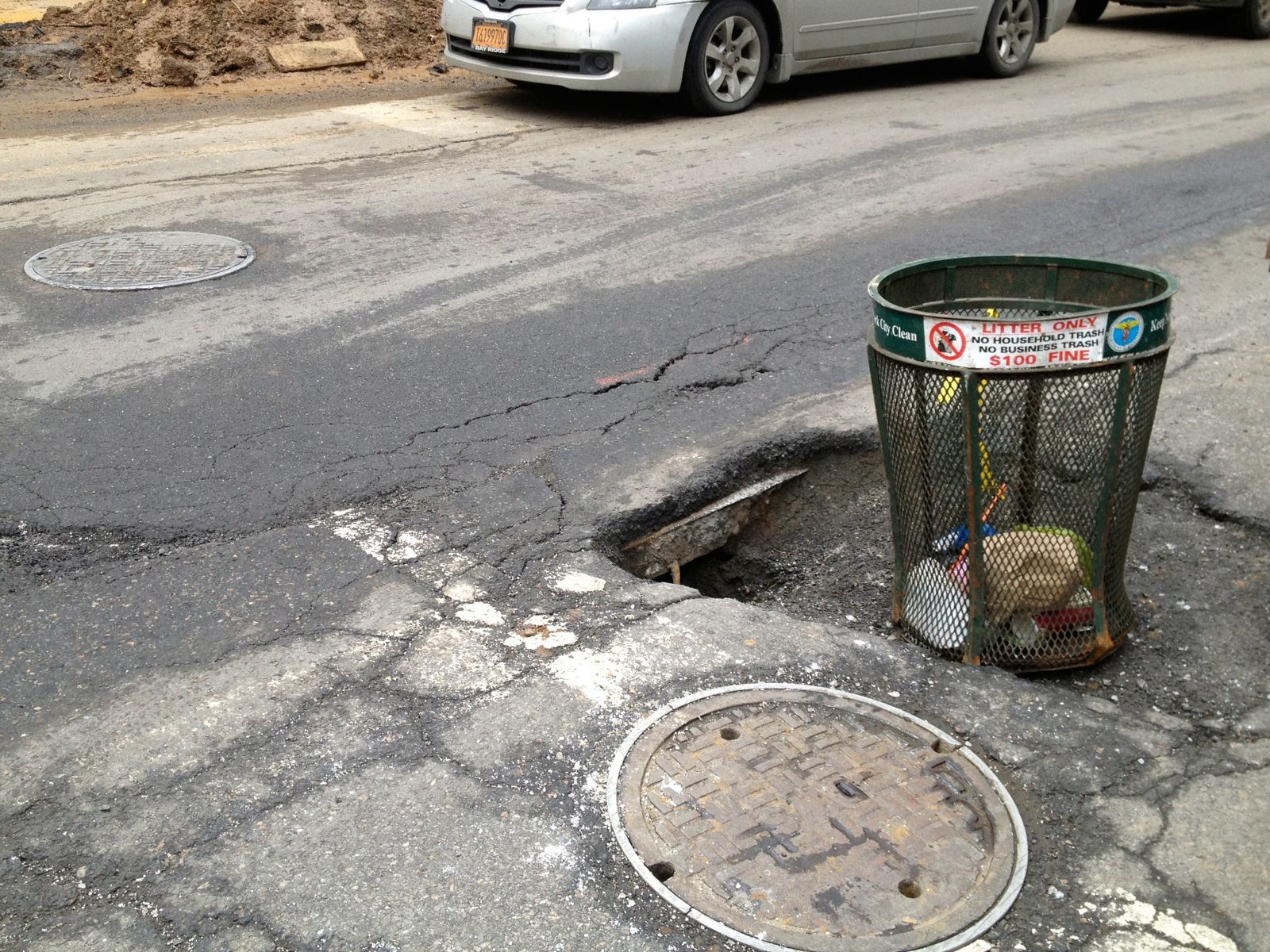 The city has filled in a record number of potholes so far this year — 113,131 [http://newyork.cbslocal.com/2014/02/20/mayor-bill-de-blasio-dot-commissioner-wage-war-against-potholes/] to be exact, more than they did during the same time in 2012 and 2013 combined. And this morning, Mayor de Blasio, summoning his previously displayed 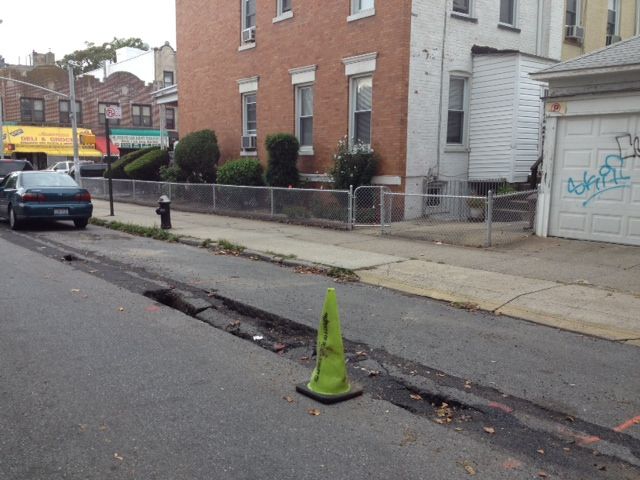 Last night’s storm certainly left a lot of damage–there’s that huge tree branch on Beverley and E 5th [/green/branch-blocks-beverley-road-e-5th-street] that was still blocking the sidewalk when we passed by around 1pm, and now a neighbor sends these photos of a partial street collapse on E 2nd 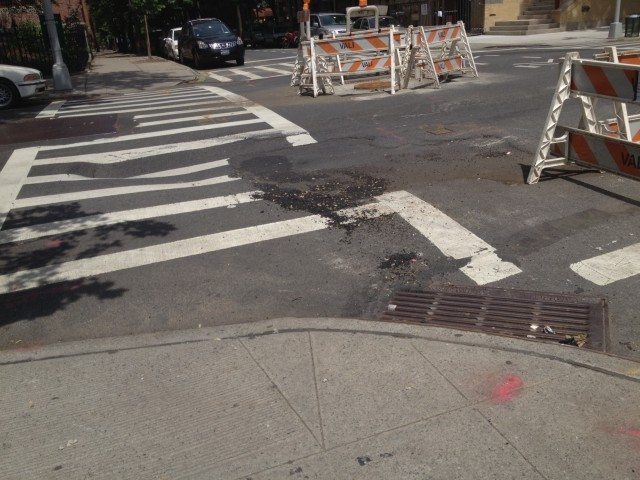 In addition to scheduled manhole work [http://a841-dotweb01.nyc.gov/permit/permit/web_permits/returnSortedPermits.asp?sort=permit_number] on 8th Avenue and 14th Street, it looks like the intersection is in need of a little sinkhole repair. We spotted the above crosswalk depressions this morning as we were walking

The sinkhole before repairs.Long covered by an upside-down traffic cone, a sinkhole approximately two feet wide and five feet deep has existed for several months at the corner of Emmons Avenue and East 21st Street, near Randazzo’s. After months of complaints from neighbors, the city is finally fixing

Drivers beware! A massive sinkhole has formed on Knapp Street, near Avenue Z. We first heard about this yesterday from a reader, but we were waiting to get out there and snag a photo ourselves. But then that scallywag over at GerritsenBeach.net [http://www.gerritsenbeach.net/] beat us to