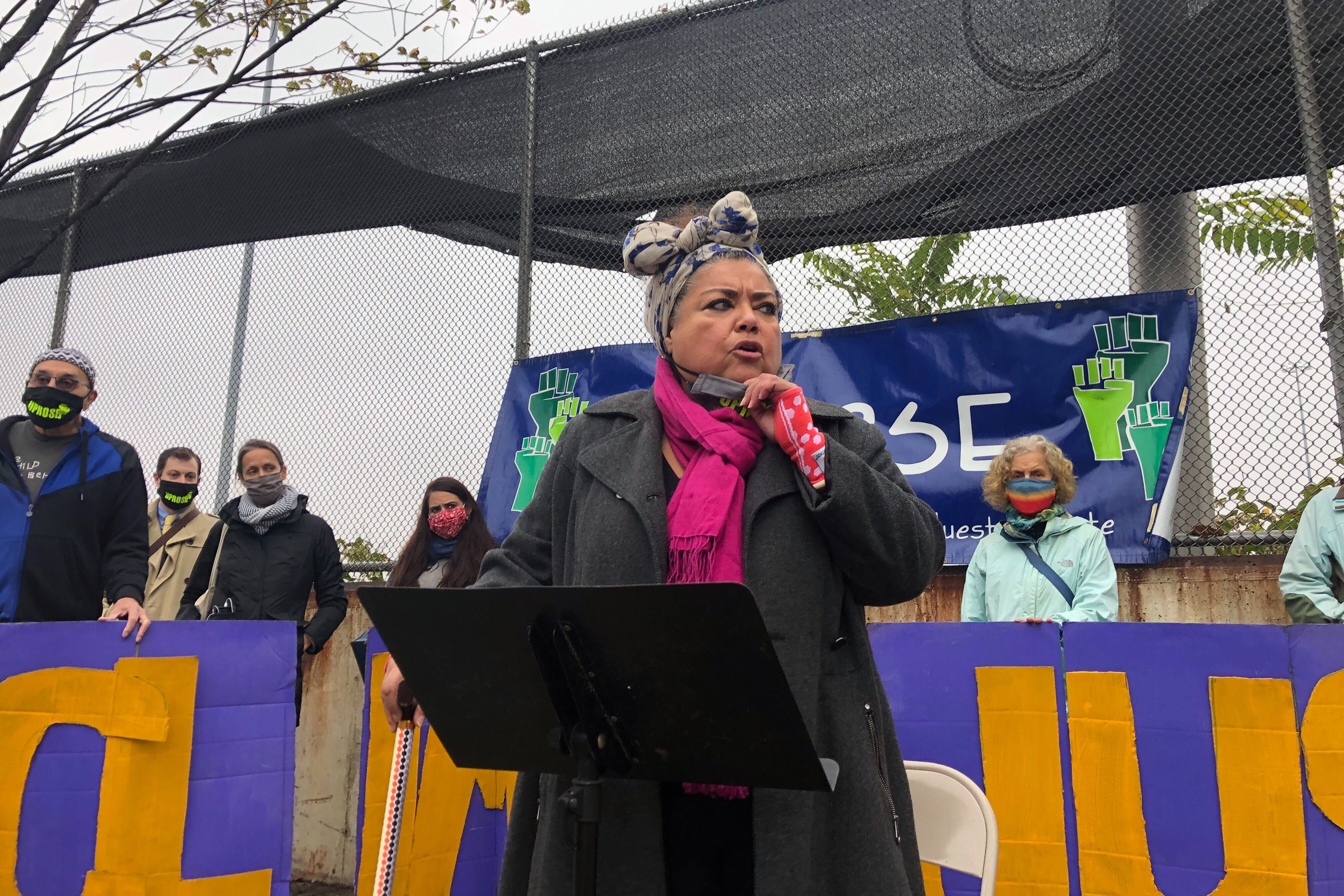 By Gabriel Sandoval, THE CITY. This article was originally published by THE CITY

Sunset Park environmental justice advocates had pressed for more than two decades to revive a declining industrial waterfront while sowing the seeds for projects that would serve their largely Latino and immigrant community as well as the environment.

“The possibility of bringing good paying jobs to our community and to also address climate change, for us, that’s everything,” said Elizabeth Yeampierre, executive director of the local group UPROSE. “That’s what we fight for. We fight for our people, for our abuelas, for our tias, every single day.”

After the city’s Economic Development Corporation took over the long-dormant South Brooklyn Marine Terminal in 2015, Yeampierre’s group and allies began sharing a vision to reimagine the 73-acre port as a source of renewable energy and jobs for local residents.

Equinor Wind US LLC scored the winning bid to upgrade the South Brooklyn Marine Terminal, beating out a dozen other proposals for locations across the state. Cuomo projected that 1,200 jobs will be created on the Brooklyn site, which is co-run by Industry City and Red Hook Container Terminal under a lease from EDC.

With its selection by the state Energy Research and Development Authority (NYSERDA), Equinor secured up to $200 million in state loan and grant funding for the wind staging and assembly facility, also to be used as an operations and maintenance base for the firm and other developers.

Equinor will also establish a wind tower assembly plant at the Port of Albany and erect two wind turbine farms off Long Island and Nantucket, joining a third offshore wind installation the firm secured in 2019.

This new green deal is not without controversy.

Equinor’s partner on the project is the oil giant BP, which joined shortly after announcing plans to increase its renewable energy investments. Some Sunset Park residents question whether BP, with its track record as a major polluter, will have the community’s best interest at heart.

Yeampierre says the environmental benefits and jobs more than justify the project.

“If we are going to envision a green re-industrialization or a waterfront that can serve a community’s Green New Deal needs, this is the project for that,” she said.

Yeampierre called the plant an essential piece of GRID — the Green Resilient Industrial District, a larger vision for the waterfront her group and others presented as an alternative to the recently scrapped proposal to expand Industry City, the nearby shopping, food and artisanal manufacturing complex.

And she touted the wind turbine project as a coup not just for Brooklyn and New York, but for struggling neighborhoods across the country looking to their futures.

“It shows to other cities what an industrial waterfront community can do to rectify the history, the legacy of environmental injustice, and to address the issue of climate change,” Yeampierre said.

With environmental and labor groups rallying, Cuomo had the wind at his back when he  signed the Climate Leadership and Community Protection Act last year. The measure requires the state to reduce greenhouse gas emissions 85% below 1990 levels by 2050 and produce all electricity without carbon emissions a decade before that.

It aims to steer at least 40% of clean energy funding to “disadvantaged” communities such as Sunset Park.

Equinor wasn’t the only energy company vying to bring its wind aspirations to Sunset Park — an outfit called Deepwater Wind had previously pitched itself to the community.

But the Norwegian firm wound up coalescing support in Sunset Park, from grassroots groups to unions to local representatives.

“We leaned into the idea of, ‘No, we don’t want to get rid of industrial, we want to keep it and we want to make it better, because it employs us and it doesn’t have to poison us,’” said Eddie Bautista, executive director of the New York City Environmental Justice Alliance, of which UPROSE is a member. (Bautista and Yeampierre are married and the organizations share office space.)

“In Sunset Park, we are rising with a vision that is now being articulated with actual investment,” Menchaca, a mayoral candidate, told the crowd.

In November, area Democratic Reps. Jerrold Nadler and Nydia Velázquez wrote Cuomo urging him to back the South Brooklyn Marine Terminal project — to “maximize the waterfront’s potential as an economic hub of traditional and innovating industries, job creation and workforce development.”

A month earlier, advocates, politicians and labor unions gathered to urge NYSERDA to pick Sunset Park — though skirting any mention of Equinor.

Now that his members’ pressure has yielded the state’s support, “one of the things we’re looking forward to is ensuring the success of these projects, ensuring timely completion and doing the work,” he added.

“Cuomo is putting a plan on the table that asks us to partner with Equinor Wind and the billionaires behind one of the world’s largest polluters to create a new off-shore wind energy job market in Brooklyn on this same waterfront land,” Jeremy Kaplan, a member of Protect Sunset Park, said in a statement to THE CITY.

“We look forward to reading the fine print behind this agreement to ensure working-class people, not billionaires, ultimately benefit from this public investment.”

An Equinor spokesperson did not respond to a request for comment.

The concerns cropped up at a Thursday night meeting of Brooklyn Community Board 7’s waterfront development committee held via Zoom, following a presentation by Equinor representative Julia Bovey.

Jorge Muñiz Reyes of Protect Sunset Park asked whether Equinor would sever its ties to BP if public funding became available via the incoming Biden administration.

“I can’t answer your question about what we would do if the Biden administration came up with the $100 million that we’re putting in, because in some ways I think that a company should be accountable and should have to have skin in the game.”

Yeampierre said her group has already asked Equinor lots of tough questions, including how it’ll operate in a way that’s carbon neutral and what its supply chain looks like.

“We didn’t want the climate solution to become an environmental justice problem,” she said.

When it was clear the project would stimulate the local economy, have a regional impact and help the community, UPROSE decided to back it, she said. But Yeampierre still wants Equinor to prove itself to Sunset Park.

“At the end of the day, Equinor is still a corporation and so they have to show that they are a real community partner and that they are incorporating community concerns,” she said.