On May 15 (the 95th anniversary of the boardwalk), the New York City Landmarks Preservation Committee (LPC) voted unanimously to approve Coney Island’s Riegelmann Boardwalk as a scenic landmark.

On July 18, the City Council voted to approve the LPC’s designation, following a years-long effort, led by Council Member Treyger, to preserve and protect the 95-year-old, 2.7-mile-long iconic attraction.

Treyger has led the charge to landmark the structure since becoming Council Member of District 47 in 2014. Under his direction, the City Council voted unanimously to support a resolution that would protect any physical alteration threatening the historical character of the boardwalk. In 2009 parts of the boardwalk were replaced with concrete and composite planks, upsetting locals who want to keep the structure’s integrity and authentic appearance.

At a public hearing in April, the LPC noted that the agency only has authority over the buildings on the boardwalk and will act in an advisory capacity to the Public Design Commission, which oversees scenic landmarks, regarding any future changes made to the boardwalk. 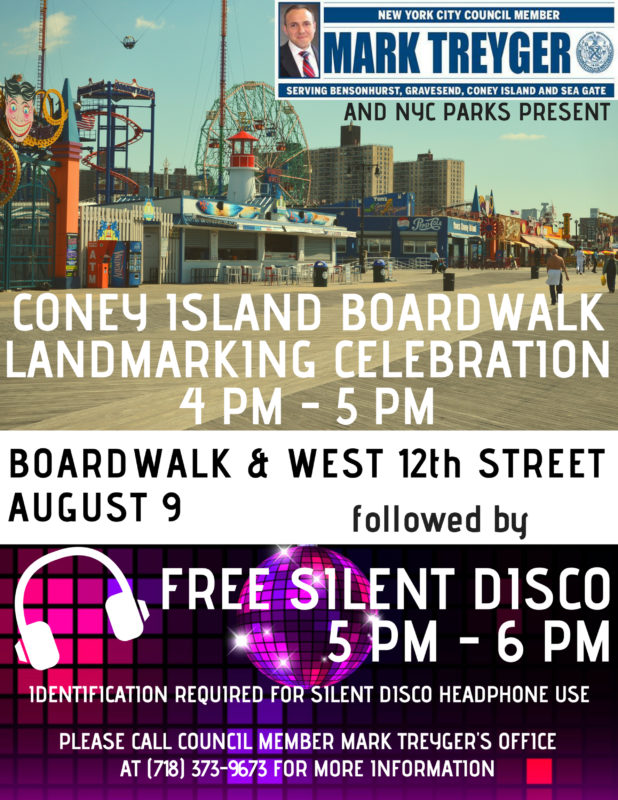 Today’s event celebrating the designation of the Coney Island Riegelmann Boardwalk as a NYC landmark will feature community leaders and Coney Island performers, followed by a free silent disco party.