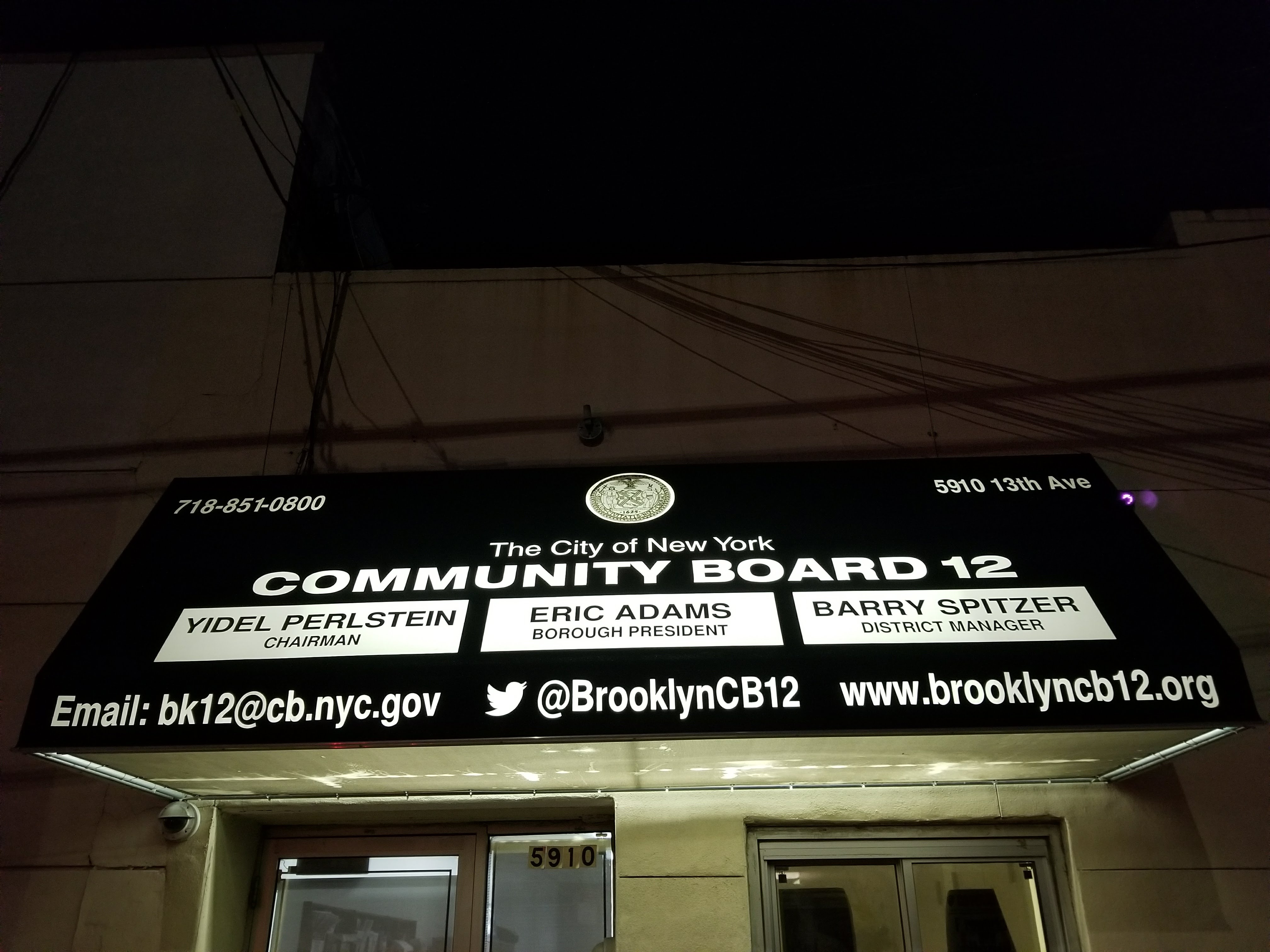 BOROUGH PARK/KENSINGTON  – The Community Board 12 meeting on Wednesday night was a heated affair, with many residents at the Kensington corner of the district upset over being kept in the dark about plans that will substantially affect their parts of the area, issues with schools and sanitation dominated.

The scheduled meeting was held as usual on the 3rd floor of the Amico Senior Center across the street from the CB12 offices on 13th Avenue between 59th and 60th streets, though there were absolutely no signs posted anywhere informing newcomers where to go.

There were three items on the agenda. An update on the Mapleton Library Reading Garden, Proposal to approve a group home for women ages 9-25 at 1471 49th Street by Hamaspik of Kings County, and proposal to approve the variance requested by Bobover Yeshiva Bnei Zion for a 9 story school (167,000 square feet) at 1360 36th Street. All three proposals were approved by Community Board, one board member voted against the school’s proposal.

The new school building is likely to consolidate a number of schools, ending up with an educational institution for thousands of students – possibly the size of a large city High School – however, we could not get the exact number and no board member asked for the number of kids the school would accommodate despite pleas from residents attending before voting. Residents were told they should have come to the public hearing the night before, of which the only public announcement we could find was a reminder on Twitter an hour before it started.

The proposed school is sited kitty-corner from another school at 1275 36th Street and down the block from yet another under construction on 37th street. According to what was presented at the meeting, the new school will have 8-9 stories, 167,000 square foot building on a 26,000 lot and will be 128 feet high and provide parking for 9 busses, and there are plans for a pool and sanctuary in the basement and sub-basement, and playground on the rooftop.

The Department of Buildings has the property at 1360 36th Street listed with permits to build a storage-warehouse, and an adjacent lot 1356-1358 36th Street with no permits or applications at all.  Either way, it seems the property that used to be home to Pergament department store and is within the rezoning lots of Culver El, right where Church avenue begins.

During the Pubic session, a number of residents from Clara and Minna streets brought up issues they are having. Clara street neighbors were complaining about school buses serving the Unitel Talmudic Academy school at 1275 36th Street blocking Clara street despite available parking, as well as idling for long periods of time, and discharging children unsupervised between cars. They were upset over the fact that they have been trying to get a meeting with the school to discuss and find a resolution since early fall of 2017, the fact that CB12 promised to facilitate a meeting between Purim and Passover and both are long gone and no meeting. They did say they were offered a chance to meet on a workday but that it was less than a day’s notice and they all work. They were made another promise that a meeting will take place next week.

Almost all who spoke were unhappy with the Department of Sanitation and garbage, a concern that seems to be a conversation across Southern Brooklyn in particular. One suggestion was made that maybe its time to bring back the broom and shovel on each truck so that the workers can clean up if they rip a bag or miss when dumping a basket. Folks noted that proximity to Greenwood Cemetery makes issue with raccoons and other animals scavenging on improperly disposed or not picked up garbage that much worse.

Another issue that was brought up was loitering outside Hamilton Inn (a shelter) and school buses not stopping at red lights at Chester, Church, and Fort Hamilton Avenues.