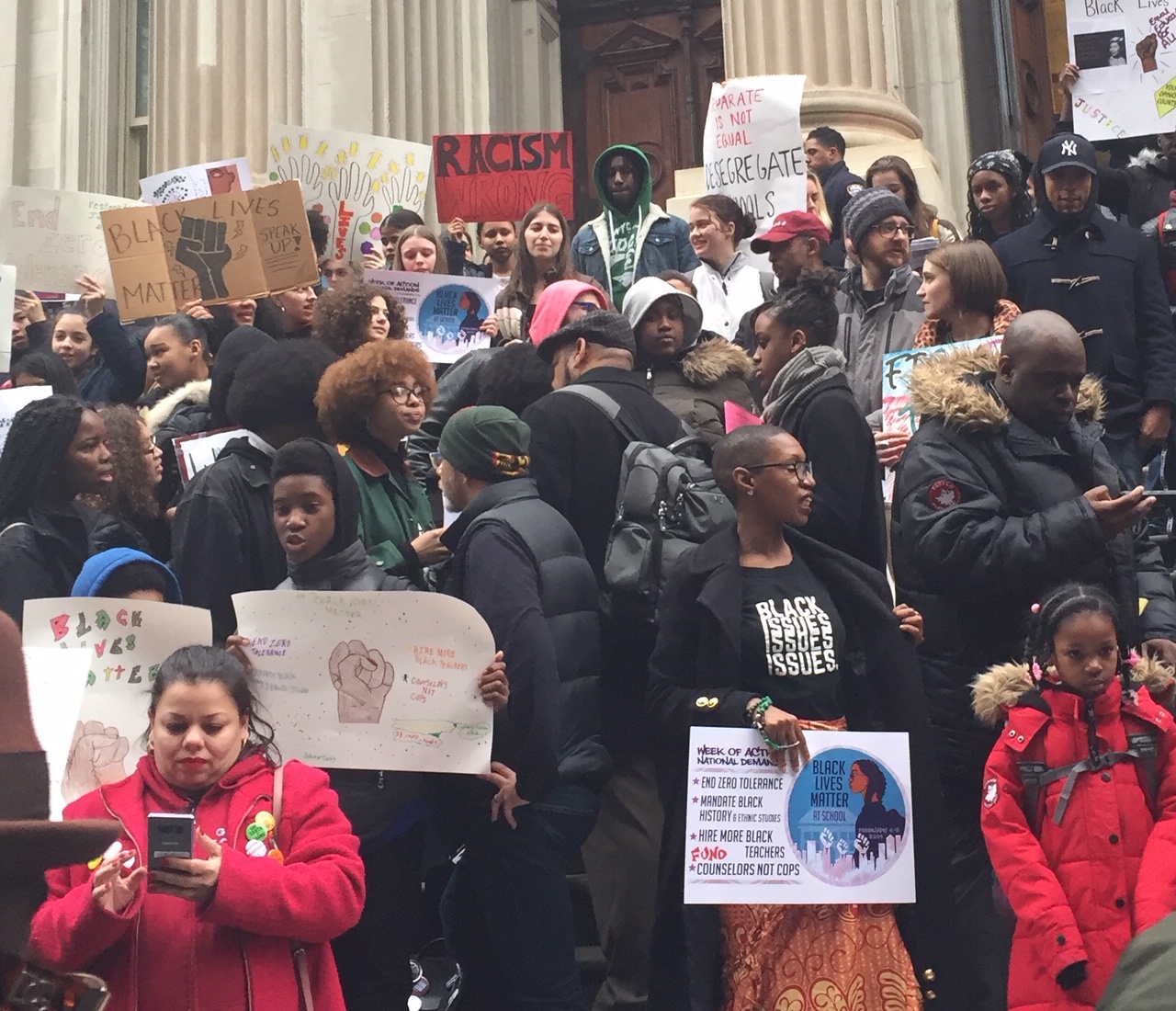 On Thursday evening, on the steps of the Department of Education’s location at 52 Chambers Street near City Hall, stood dozens of students, teachers, and activists from all over the city for the Black Lives Matter at Schools Rally. It was part of a nationwide movement to demand changes to how students of color are treated, mentored and taught about their history all over the country.

“It is to make sure the school [system] adheres to our demands,” says Anthony Beckford, president of Black Lives Matter Brooklyn, who organized the rally. “The way the system is, is the same as the criminal justice system. They traumatize and misinform us.”

During the 90-minute rally, some drivers who drove by the rally beeped their horns, and even gave the peace sign, to show their solidarity. There were many passionate speeches and cheers, all declaring the need to change the curricula while talking about their experiences at New York City schools where 68% of students are either Black or Latinx, but teachers of color are hardly seen.

Among their demands were including mandatory Black history and ethnic studies for all grades, hiring more Black teachers, ending “zero tolerance” discipline and having more counselors than cops in schools.

Beckford was one of the early speakers. When he took the megaphone, the crowd cheered loudly for him. With his 7-year-old daughter by his side, Beckford spoke about the effects of the current lessons on Black history on Black students.

The Director of the Alliance of Equality Education, Zakiya Ansari, told the crowd about the lack of funding for students of color in New York State. “We have a generation of black and brown children who have missed out on opportunities. We need to end the school to prison pipeline. What we need are legislators to acknowledge that Black Lives Matter.”

Later, a student activist from Careers in Sports High School in The Bronx, Angel Perez told the crowd there were some aspects of Black history that are not taught in schools.

“Did you know that traffic lights were made by a Black inventor?” Perez said about Garrett Augustus Morgan. He went on to point out how many students simply learn about slavery and the Jim Crow era. “This is why we are traumatized. There’s no excuse to not teach Black history and multicultural studies.” 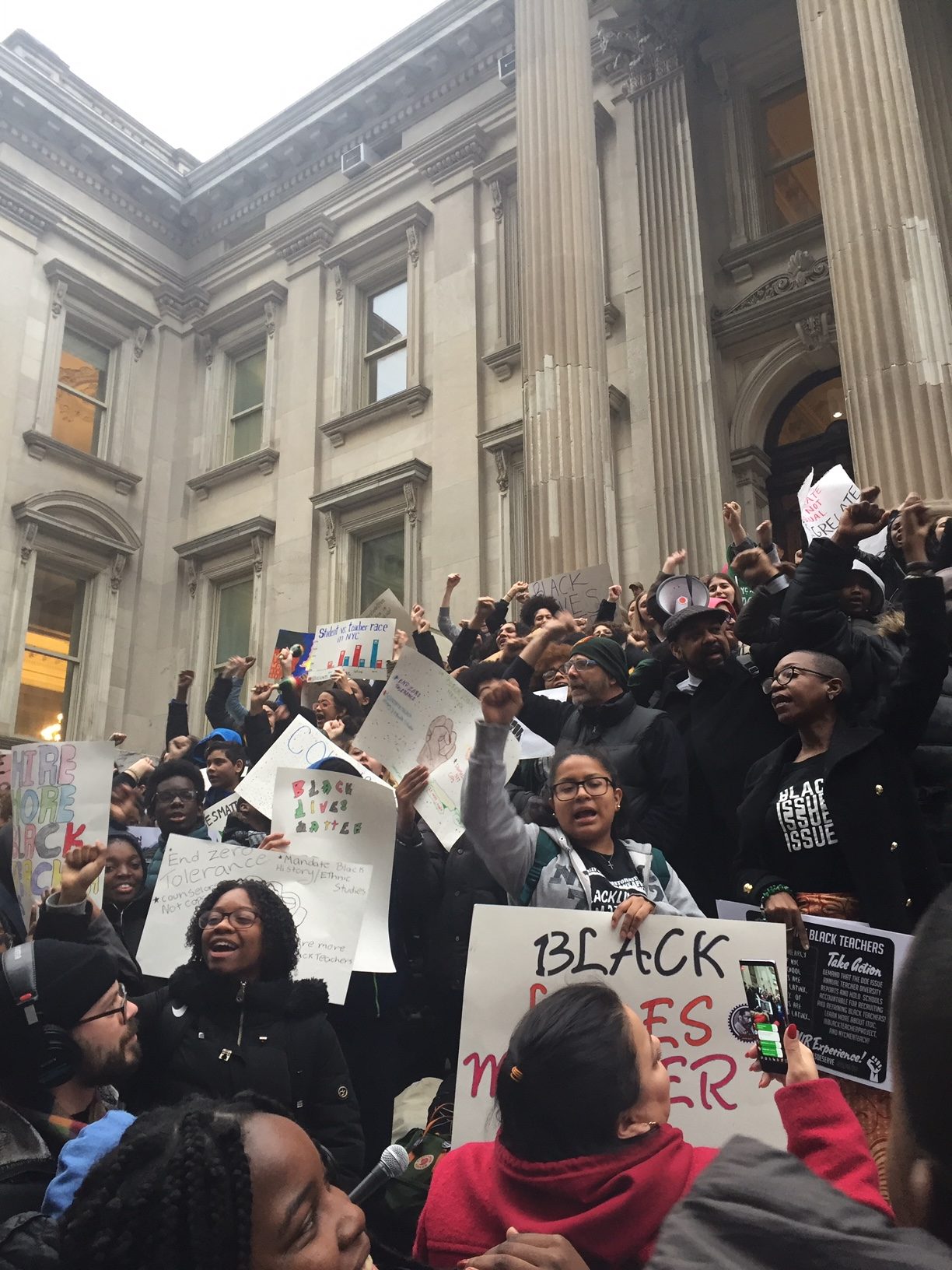 Matthew Beeston, a youth leader from Urban Youth Collaborative, spoke out against how Black students are often treated as criminals in their schools, with higher suspension rates and even arrests, compared to their white counterparts.

“Why are we always the underdog?” he said into the megaphone. “How can they expect us to succeed on the grounds that we’re not white? This is all due to the fact that the system does not want to invest in our school, our future unless it’s in handcuffs.”

Leanne Nunes, one of the directors of Integrate NYC, wept with pride as she spoke to the crowd.

“We’re here to teach healing,” she said. “I am not just a descendant of slaves, but people who are powerful and strong, and I am too. For all the youth who don’t know what healing is, we fight these injustices. Not with the violence pushed on us, but with love.”

Many others from all over the city spoke. One talked about the need for more teachers of color to be hired so students would have someone to look up to. “If I see someone who looks like me,” he said. “Then maybe I can be like them.”

Another student, who said she attends a predominately white school, said in the three years she had been there, she never had a Black teacher. It’s been a negative experience for her. 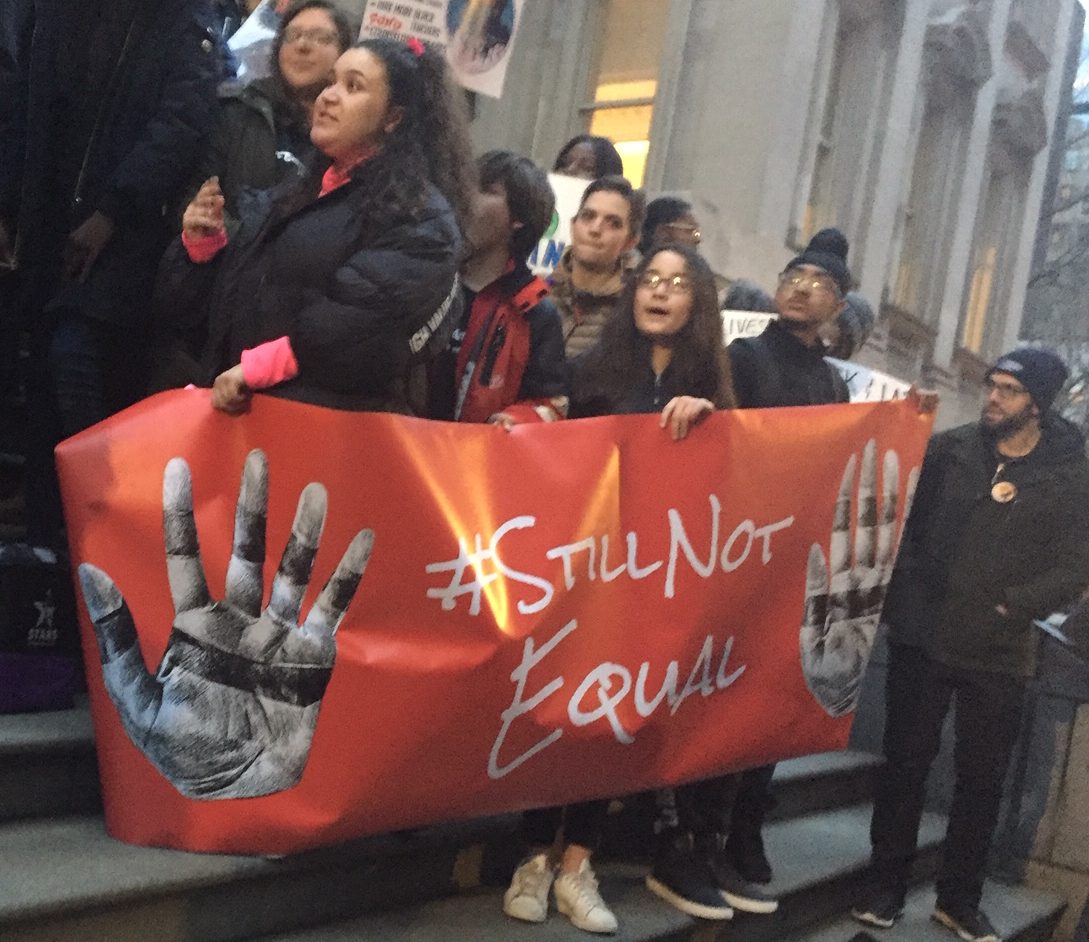 “There’s a lack of knowledge of my culture,” she declared. “We need space to express our culture. The DOE needs to be held to higher standards. Enough is enough!”

“How can they inspire them,” she said. “When the planet is being robbed a full spectrum of humanity? We’re fed lies. They’re trying to take away our Black past. We’re not fully able to be who we are on this planet.”

Throughout the rally, there were various cheers, such as “Black Minds Matter”; “Futures Matter”; “We Matter”.

At the end of the speeches, while chanting “Black Lives Matter”, the crowd turned around and began to ascend the stairs that led inside 52 Chambers Street. They intended to deliver a list of their demands directly to Chancellor Richard Carranza. They were blocked by security guards.

But no one was deterred. The crowd remained optimistic and was full of spirit, as speakers reiterated that they would not stop until all demands were met.

“We’re not stopping until the walls of Jericho are shaken,” Anthony Beckford said. “Enough is enough.”