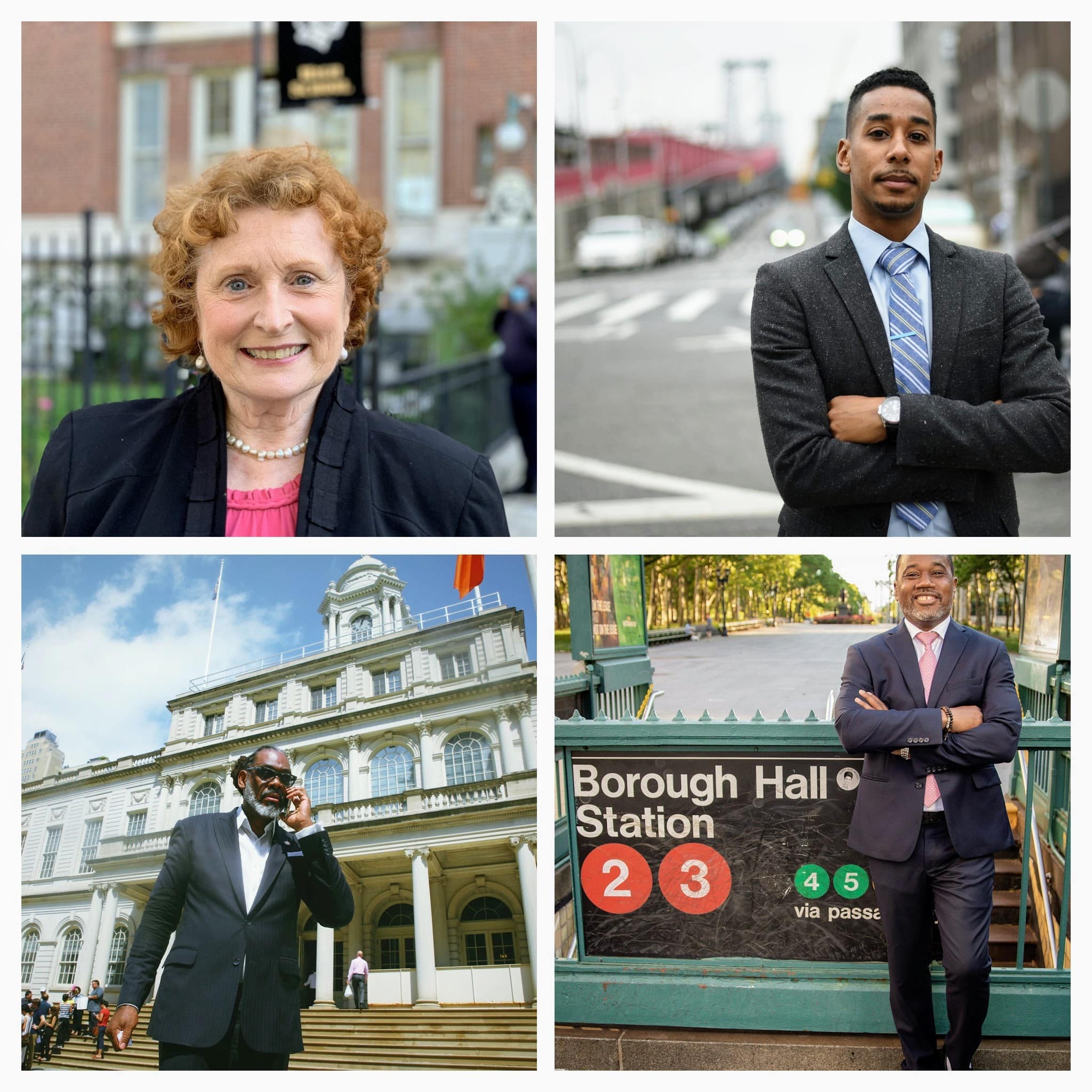 On Friday, candidates across New York City submitted their latest campaign finance disclosure reports to the city’s Campaign Finance Board (CFB). If early fundraising numbers are any indication, the fight to replace term-limited Eric Adams as the next Brooklyn Borough President is down to a race of four: Council Members Robert Cornegy Jr. and Antonio Reynoso, Assembly Member Jo Anne Simon and former Brookdale Hospital executive Khari Edwards.

Borough Presidents have relatively little real power, at least on paper: they appoint community board members and dole out a relatively small discretionary budget. City & State’s Rebecca Lewis last year described the role as a  “largely ceremonial post” that appeals to term-limited City Council Members “because it offers a platform from which to do little but promote oneself.”

But the Borough Presidency does offer a powerful public platform from which a politician can advocate for their chosen priorities, shape discussions about controversial policy issues like land use and, yes, build their public profile. Case in point: Eric Adams, the outgoing Borough President, is now a top contender for mayor.

Here’s what the latest numbers show:

At first glance, Cornegy, who currently represents Bed-Stuy in the City Council, looks like the clear front runner for the role, having raised $249,640 to date.

Trailing closely is Simon, whose Assembly district stretches from DUMBO to Park Slope and who has collected $242,850. Reynoso, who represents parts of North Brooklyn in the Council, has taken in $166,396, and Edwards follows him with $144,942.

After those four, there’s a steep drop off to Reverend Kim Council ($47,314), Flatbush Council Member Mathieu Eugene ($38,137), and a half-dozen other candidates. They risk falling even further behind in the coming months, because none of them met the $50,094 fundraising threshold necessary to receive payouts from the next round of the city’s matching funds program, in which small-dollar contributions from borough residents are matched 8-to-1.

But even amongst the four frontrunners, the overall totals mask some important nuances.

First, there’s the question of how much money the candidates actually have in the bank.

While Cornegy has raised the most, he’s also spent the most, by far. The disclosures show he only has $11,569 in his campaign account, a paltry sum compared to Simon’s $187,599 and Reynoso’s $139,089. That balance could shift if Cornegy receives the hundreds of thousands in matching funds his campaign estimates it’s entitled to when the CFB distributes the next round of payments on February 16th, but for at least the next month, he’ll have far less money to work with than his top competitors.

Much of Cornegy’s money has been spent on consulting firms; the campaign has paid Culver Place Strategies, for example, a total of $87,333 since it began in 2019.

Then, there’s the question of where the money is coming from.

(Cornegy recently returned some money given by these types of donors, but the numbers indicate he did so only to comply with a new, $1,500-donation limit set by the CFB’s matching funds program. In total, he returned over $23,000 in donations larger than $1,500, significantly more than any other candidate).

Perhaps those large, corporate donations are the reason Cornegy’s average contribution size, at $266, is by far the highest of any candidate.

Also striking about Cornegy’s disclosure form is that over a quarter of his donations came from outside New York City, the most of any candidate.

Many of Cornegy’s largest out-of-town donations came from people who have business within the city, but reside just outside it.

For example, Noah Katz, the president of PSK Supermarkets, which runs 13 Foodtown, Freshtown, and Pathmark locations, lives in Armonk, NY. Katz made two donations totaling $7,900 in July 2019 (Cornegy later returned all but $1,500, per the aforementioned CFB requirements). And several employees of SERVPRO of Garden City/Hempstead, which is based in Long Island, made donations totaling $7,600 (again, Cornegy returned some of that money).

Cornegy’s campaign did not respond to a request for comment.

Simon’s numbers, meanwhile, reveal their own quirk: she’s seeding her run with a significant loan to her own campaign.

Over the winter, Simon received large donations of $1,500 each from the attorneys Dawn Cardi and Gregory Cerchione; the interior designer Richard Mishaan and his wife Marcia Rolfe Mishaan; the philanthropist investor Jay Snyder and his wife Tracy; and property manager and Mohbat writing prize founder Nancy Schuh.

But Simon’s biggest source of money is currently herself. The Boerum Hill-based Assembly Member, who chairs the Assembly Committee on Ethics and Guidance and Co-Chairs the Legislative Ethics Commission, donated $4,500 to her own campaign in September and loaned it another $125,000 in October.

Candidates will sometimes use loans, which must be repaid in full before election day, as a way to get their campaigns off the ground while they fundraise from other sources. But Simon’s loan is unusually large; it represents nearly a third of the total $389,696 currently loaned to all campaigns across the city.

A spokesperson for Simon, who’s been endorsed by State Senator Vilmanette Montgomery and local political clubs like the Lambda Independent Democrats, pointed out that she launched her campaign in October, significantly later than Cornegy or Reynoso. She also said raising money amidst the holiday season and soaring pandemic numbers posed unique challenges that warranted the loan.

“Jo Anne is really grateful that over 800 donors came forward,” the spokesperson, Anne Strahle, said. “When she said she was running, we got so many calls and texts that said, ‘How can I help?’ Brooklyn has never had a woman Borough President, but she’s the right person, she has the right policy and energy, and she really cares.”

Meanwhile, Reynoso may have the people-power, at least for the moment.

Reynoso, who has sought to position himself as the progressive candidate in the race and has received the endorsement of left-wing groups like the New York Working Families Party and the immigrant advocacy group Make the Road Action, had not only the most individual donors, but also the lowest average contribution size and the highest percentage of in-city donations of the four frontrunners.

“Our campaign is powered by the people — not special interests or real estate developers — and I’m so proud of the outpouring of grassroots support we’ve received,” Reynoso told Bklyner in a statement. “The fact that our campaign has the most donors from within the borough and the smallest average donation size shows that our vision for a progressive, more equitable Brooklyn is resonating with working people, and I’m grateful to every person who donated their hard-earned dollars to our campaign.”

Reynoso returned $1,500 contributions from the Soft Drink Brewery Workers PAC, as well as the investment tech firm Madison Group. The campaign said those donations had been returned for technical reasons: the brewery workers group is an unregistered PAC and so is not allowed to donate, while the Madison Group made its donation with a business check, which also violated CFB rules. Records show individuals working at the firm later made personal donations instead.

Edwards, who launched his candidacy in November, could be the dark horse candidate.

The Crown Heights-born son of immigrant parents from Trinidad and Guyana, Edwards does not yet have any major endorsements. His largest contributions are a grab bag, and include some potentially controversial donors.

Edwards’ campaign received $1,500 donations from Joel Landau, the head of the controversial nursing home chain Allure Group, which was at the center of a 20-month city and state investigation for closing and selling a Lower East Side nursing home to luxury developers; Rachel Landau, Joel’s wife, gave another $1,500.

He also received $1,500 each from billionaire Alexander Rovt and his wife, Olga. Rovt, who serves as the chair of Brookdale Hospital’s board, made his fortune selling chemical fertilizer with IBE Trade Corp; he now has significant real estate holdings in Brooklyn and throughout the city. Another IBE employee, vice president Philip Roth, also gave $1,500.

In a statement provided to Bklyner, Edwards’ campaign did not directly address those donations.

“Khari Edwards is excited by the grassroots support for his campaign,” the campaign said. “Over 90% of contributions were less than $250 and almost 70% are from Brooklyn. His priorities are bringing truly affordable housing to Brooklyn, supporting our small businesses and improving health outcomes in the borough.”

How are the candidates spending their money?

On the expenditures side of the balance sheet, most of the frontrunners’ largest expenses were for consultants, though, as mentioned earlier, Cornegy has so far outspent the others by a wide margin: