EAST FLATBUSH — Monique Chandler-Waterman, running to fill the vacant seat in the 45th council district, received a bunch of new endorsements Wednesday, less than a month before the May 14 special election. 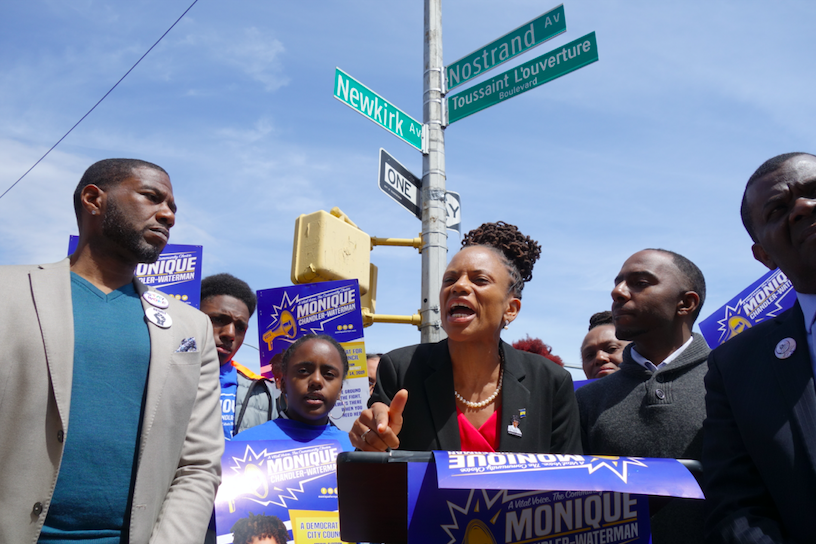 Williams’ decision comes as Chandler-Waterman battles his former deputy chief of staff, Farah Louis. The Haitian-American flacked for Williams for six years when he was councilman of the very same 45th district. Louis has strong backing from the Haitian-American community in Flatbush, including Assemblymember Rodneyse Bichotte who spearheaded the designation of Little Haiti.

“I chose this location for a reason,” Williams said, standing under a street sign that read Toussaint L’Ouverture Blvd. signaling the heart of Little Haiti in Flatbush. “My hope is that all of us when we are finished have a unified 45th district.”

The 45 district encompasses Flatbush, Midwood, East Flatbush and Canarsie. Seven candidates are in the running to fill the empty seat after two candidates were thrown off the ballot Tuesday.  Public Advocate Jumaane Williams vacated the seat after winning another special election for public advocate.

“She’s committed her life to the people of the 45th council district and I, Zellnor Myrie, am proud to give her my support as she makes her way to city hall,” said Myrie via a message from State Sen. Parker.

For Cumbo, who represents Ft. Greene, Bedford Stuyvesant and parts of Crown Heights,  “sisterhood” and “motherhood” was the source of her endorsement.

Chandler-Waterman, a mother of four, runs a non-profit established in 2008. The 38-year-old is a graduate of the public school system and is pursuing a masters.