They’ve filled jobs in media and construction, here in Brooklyn, Salvadoran immigrants are doctors, professionals, and artists. They create jobs and own businesses, including great pupuserias and gyms.

But those glowing accomplishments are often obscured in the mainstream media narrative, which focuses on more negative associations with the Salvadoran community, like MS-13, a brutally violent gang made up of mostly Salvadoran and other Central American members that was founded in Los Angeles. President Trump has used the gang as a reason to stoke fear of immigrants, when in fact the primary targets of MS-13 are other immigrants.

Enter SalviYorkers, a new book about the history of Salvadoran Americans in New York, told by a recent emigre and herself a SalviYorker, journalist Carmen Molina-Tamacas. The title of the book combines two terms: “Salvi” and “Yorker” –  “Salvi” is a term younger Salvadoran-Americans use to refer to themselves, “Yorker” refers to New York. Published in Spanish, it recounts the broad history of and chronicles the lives of Salvadoran immigrants, who have been arriving in New York from the early 1900s to the present day, and in greater numbers in the past two decades.

Carmen Molina-Tamacas is part of the wave of recent immigrants. She moved to Bensonhurst from San Salvador, the capital of El Salvador nearly a decade ago with her husband, a U.S. citizen. “We came as a family in search of greater opportunity,” Molina-Tamacas says. “It’s not that easy to maintain a good job in El Salvador.”

“It was a huge cultural shock,” when she arrived in New York, Molina-Tamacas says. “For example, in our apartment building, we’re the only Latino family. Although there are other Latino families living in other nearby buildings, we’re the only one in our building. How does one adapt to that when it becomes your daily life? Everything has been a learning process.”

The diversity that Molina-Tamacas encountered in Brooklyn was both a challenge and an asset. “For me, it’s fascinating,” she says.

During her research, Molina-Tamacas could only find one other book about the history of Salvadorans in the U.S. – an ethnography written thirty years ago. Molina-Tamacas knew that there was way more to add to the story.

Molina-Tamacas studied anthropology in college and has worked in journalism for over two decades (including freelancing for Bklyner). “SalviYorkers” is neither a purely academic or journalistic book. The first part of the book outlines the history of Salvadorans in the U.S. and New York specifically. There are currently more than half a million Salvadorans living in New York City, according to estimates the author cites from the Salvadoran consulate, mostly in Nassau and Suffolk counties.

But one of the first recorded Salvadoran families in New York settled in Brooklyn, she found. Americo Oriano and his Italian-Salvadoran family arrived at New York Harbor on Labor Day, Sept. 2, 1929, and settled in East Flatbush, near Prospect Park. Oriani was an optician and developed technology and patents for contact lenses.

Molina-Tamacas also included a story she wrote for Bklyner in 2018 about Salvadoran immigrants living in fear of deportation after President Trump threatened to revoke the Temporary Protective Status (TPS) that allows thousands of Salvadorans to work in the country legally.

There are 26,000 TPS holders in New York from El Salvador. Salvadorans were granted protective status in 2001 following a series of major earthquakes in the region, and TPS was extended due to other natural disasters and gang-related insecurity. Previously, President Trump set TPS for Salvadorans to expire in January of 2020, but now it has been extended to January 2, 2021.  Other residents currently protected under TPS include immigrants from Haiti, Honduras, and Nicaragua. But the program could end at any time, and once it expires, permit holders will have to leave the U.S.

The goal of writing “SalviYorkers” wasn’t to debunk any stereotypes or offer a counter-narrative, Molina-Tamacas says. “‘Salvi’ should be much more than just stereotypes,” she admits. But she says she just wanted to present regular Salvadorans in New York City, living their lives, as she had gotten to know them through her reporting and research.

“Anyone can be extraordinary,” she says.

“SalviYorkers” was published by K-Ediciones in Miami, Florida. It is available in Spanish in paperback and digital forms on Amazon. Molina-Tamacas hopes to translate the book to English in the future. 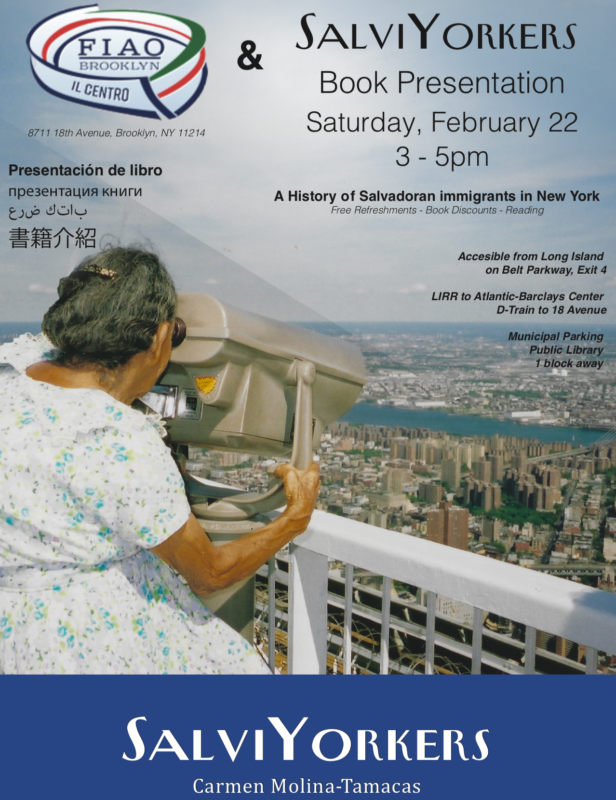