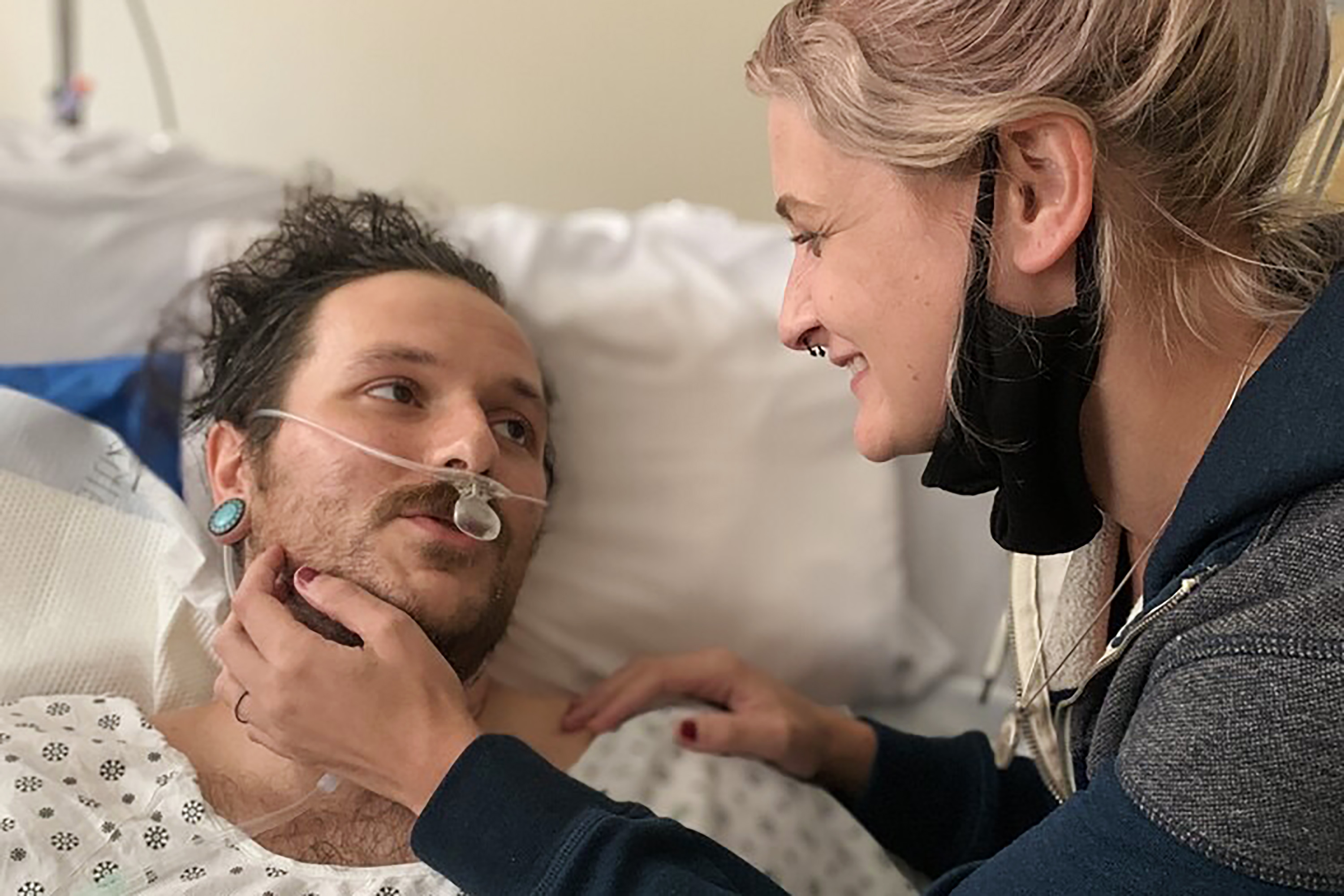 Sam Metcalfe is joined by his wife, Sabrina Parziale, as he recovers from the Brooklyn shooting that paralyzed him. | Amanda Donoghue

By Claudia Irizarry Aponte, THE CITY. This article was originally published by THE CITY

Sam Metcalfe remembers the words of the stranger who comforted him after he was shot in the hip near his Brooklyn home, caught in a blaze of gunfire that killed a young man.

“God loves you,” the man told Metcalfe repeatedly, in a scene captured on video. “You’re gonna be OK.”

On Thursday, just over two weeks after the shooting that left him paralyzed from the waist down, Metcalfe expressed gratitude for those who rushed to his aid after the shootout at Woodruff and Ocean Avenues in Flatbush. And Metcalfe mourned 18-year-old victim Malcolm Amede, who had welcomed a child in early August.

“My community is a loving one, and it saved my life,” Metcalfe told THE CITY. “There are a ton of people who were there to support me to try to keep me alive, and a lot of people in that community would have loved to see Malcolm survive as well.

“No one won in this situation. I am going to go through years of rehab and suffering and have my life drastically altered. And Malcolm is dead, and whoever has shot him has gained nothing but being hunted for the rest of his life,” he added.

The deadly Aug. 19 shooting marked the third killing in a single week along a stretch of Ocean Avenue near Prospect Park. On Wednesday, New York City surpassed 1,000 shootings for the year, nearly double over the same period in 2019.

Speaking over FaceTime from his Manhattan hospital bed, Metcalfe said his family has been thrust into the center of a citywide debate over an uptick in gun violence that has left many New Yorkers fearful for their safety.

Some — from police union leaders to lawmakers — blame the shooting spike on criminal justice reforms approved by the state Legislature.

The increase in gunfire has even drawn the attention of President Donald Trump, who threatened to cut federal aid to New York and other cities that have experienced a spike in violent crime.

But Metcalfe, who marked his 34th birthday last week, called the notion that recent bail reforms contributed to an increase in bloodshed “utterly ridiculous.”

“I believe the issue is a systemic, economic one of inequality,” he said.

“There’s clearly an issue with class divide in our country,” Metcalfe added. “And the solution must be some sort of reconciliation between the police and our communities.”

Metcalfe’s life changed forever that rainy Wednesday afternoon when he decided to tag along with his wife, Sabrina Parziale, as she ran errands during his work-from-home lunch break.

They stopped at a local drugstore, and bought toothpaste and nail polish. He was struggling to hold their broken umbrella for her as they walked back home when they saw a silver SUV pull up and heard gunfire.

“I yelled at my wife to ‘Get down!’” Metcalfe said. “I laid on the ground and tried to lay as flat as I could.”

Metcalfe said he watched as a wounded Amede collapsed on the ground before pulling out his own gun. The succession of shots increased and Metcalfe, caught in the crossfire, felt a piercing pain to his hip and “immediately” lost all sensation in his legs, he said.

The gunfire eventually stopped and the SUV sped away.

Amede, in a cruel twist of fate, was reportedly on his way to a memorial for Paul Pinkey, who had died in a shooting on that same street just days prior on his way to another memorial.

Calls to the home of Amede’s aunt Petra Amede, who has spoken out about her nephew’s death, were not returned. She apparently wasn’t home when THE CITY knocked on her door Wednesday afternoon.

“Malcolm was a quiet type until you know him, and then he had a big heart and always had you laughing,” his cousin Fross Amede told the New York Daily News.

‘A Long Road Ahead’

Invoking Malcolm Amede’s memory, Metcalfe called on lawmakers who serve “a city filled with so much creativity and wealth” to address systemic inequality.

“He was an 18-year-old kid who was actively being hunted by another human being with a gun. I can’t imagine in my wildest dreams living in such a situation of fear and desperation where I’d have to worry about someone actively trying to shoot me wherever I went all the time.”

A “Black Lives Matter” flag hangs in front of Metcalfe and Parziale’s home, and he attended some marches throughout the city this summer in “solidarity” with demands for police accountability in the wake of George Floyd’s death in Minneapolis, he said.

The Huntington, L.I., native moved to New York a decade ago, and in 2015 married Parziale in Prospect Park, not far from their home.

Metcalfe, an artist and “incredible” amateur acrobat according to a friend, awaits additional surgeries and a long road to recovery. It is unclear whether he will walk again.

His injuries were so severe that the trauma surgeons at Kings County Hospital were unable to sedate him during his initial life-saving procedure. He watched as doctors removed his kidney and administered blood transfusions.

Metcalfe’s family has set up a GoFundMe to cover the costs of his medical care and rehabilitation, estimated at over $500,000 for the first year alone, according to an Aug. 27 update by Parziale.

“We were also told the biggest thing for his recovery is a determined attitude and a community of people around him supporting him,” she wrote. “Anyone who knows Sam knows he has the first part down.”

Metcalfe said he is taking things one day at a time: “I have a long road ahead of me.”

Brooklyn Is Now Red And Yellow, But No School Till Monday Soonest

Brooklyn Is Now Red And Yellow, But No School Till Monday Soonest