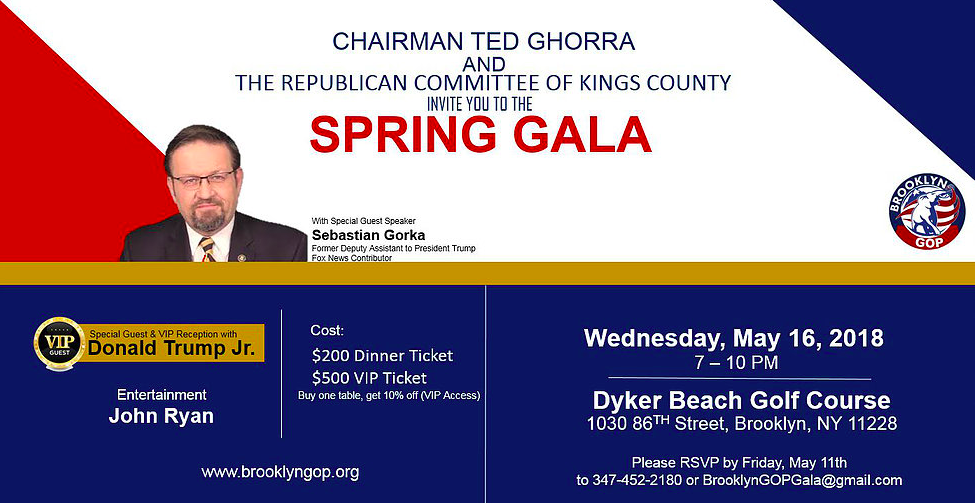 DYKER HEIGHTS – President Trump’s son, Donald Trump Jr. and former White House aide Sebastian Gorka will be headlining Brooklyn Republican Party’s Spring Fundraiser, set for May 16 at the Dyker Beach Golf Course. Patrons can expect to pay $200 per dinner ticket, but you will need to shell out $500 to mingle with Trump Jr. and Gorka during the VIP reception.

Gorka, formerly of Breitbart News, served for 7 months last year as an aide to President Trump, while he was wanted on weapons charges back in his native Hungary. Prior to his seven-month stint under President Trump, Gorka, was reportedly fired from the Federal Bureau of Investigations following extreme Islamophobic rhetoric.

“Sebastian Gorka has been called a fraudulent, uninformed, racist, Islamaphobic , anti-Semitic, Nazi sympathizer by people in his own party!” said Councilmember Justin Brannan who serves in the district where the venue is located.

“For me this has absolutely nothing to do with partisan politics. I have no idea why anyone would think bringing this guy to our community and saluting him as a guest of honor would be a good idea.”

Senatorial candidates in the 22nd District voiced vocal opposition.  Andrew Gounardes who began denouncing Gorka’s attendance on Twitter this weekend has started a petition in protest. “I condemn Gorka’s inclusion, specifically, in the strongest possible terms,” said Gounardes. “I’m disgusted that Marty Golden and his hand-picked Kings County Republican leaders would bring a neo-Nazi into our community.  My district proudly celebrates our beautiful diversity, including our vibrant Muslim community, and Gorka has stoked Islamophobia and hatred of Muslims in this country,” he added.

“The Republican Party is a personality cult built around the heinous presidency of Donald Trump. It’s not exactly surprising Brooklyn’s Republicans would invite a foot soldier of hate to our borough. However, it’s still despicable and all Republicans involved in these efforts, including Marty Golden, should be ashamed of themselves,” said Ross Barkan.

GOP Chair Ted Ghorra told Bklyner the event is “invitation only” and there will be no press allowed into the venue that holds 600 attendees.

“The Republican Party has within it diverse opinions across a range of issues,” said Michael Tobman, a Brooklyn GOP spokesperson. “Like the Democratic Party, with its elected officials and activists often at odds with each other, disagreement – internal, and certainly with opponents – is a permanent part of political organizations. The Brooklyn GOP looks forward to its May event.”

Congressional candidate Michael Grimm and President of the Brooklyn Reform Party Bob Capano will attend. Assemblymember Nicole Malliotakis and State Sen. Marty Golden did not respond to request for comment.

A spokesperson for U.S. Rep. Dan Donovan said the congressman is in session the same day of the event and has not confirmed whether or not he will be attending.