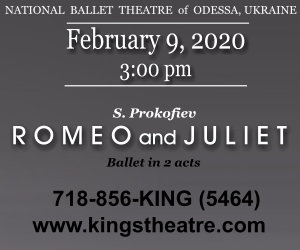 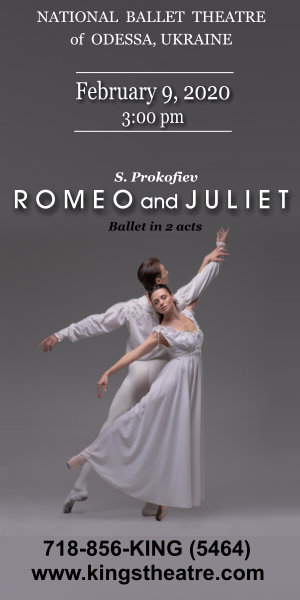 ROMEO AND JULIET Full-Length Ballet in 2 Acts
Music by Sergei Prokofiev, Choreography by Michael Lavrovsky, Production by Garry Savoyan.
This full-scale, set to the music of Sergey Prokofiev and based on William Shakespeare’s timeless tale of tragic love.

The National Ballet Theatre of Odessa, Ukraine bring 55 of talented and brightest Ballet stars to present the most passionate romantic tragedy of love.

Romeo and Juliet is perhaps the most choreographed ballet of the last 60 years. Based on Shakespeare’s play, the ballet tells the tragic tale of two star-crossed lovers from families on opposing sides of a bitter feud. The dramatic and well-known balcony scene is one of the most romantic scenes in literature.
This enduring ballet masterpiece is set to Sergei Prokofiev’s magnificent score which was originally completed in 1935. In addition to Romeo and Juliet, Prokofiev’s most well-known works include the music for the ballet, Cinderella (1945), and the fairy tale set to music, Peter and the Wolf. Prokofiev’s music is characterized by percussiveness, lyricism and neoclassical structure. As one of the principal Russian figures in classical music during the period of the Second World War, his work also reflects the needs of national self-unity and support for the national struggle. Many of these themes can be seen in Romeo and Juliet - in particular, the recurrent percussive elements of the score.

The ballet, Romeo and Juliet, first arose from a suggestion from the Kirov who requested Prokofiev to write a new ballet. His choice of subject matter proved controversial from the start and the project was taken over by the Bolshoi. The problem was the ending of the story - as Prokofiev later put it, “Living people can dance, the dying cannot.” It was the longest ballet Prokofiev had ever written and the most intensely dramatic. Over a number of years and by working with several different companies, the contradictions between the dramatic and choreographic needs of the ballet were resolved and the work took its place as a centerpiece of his compositions.

What You Need To Know About Coronavirus In NYC