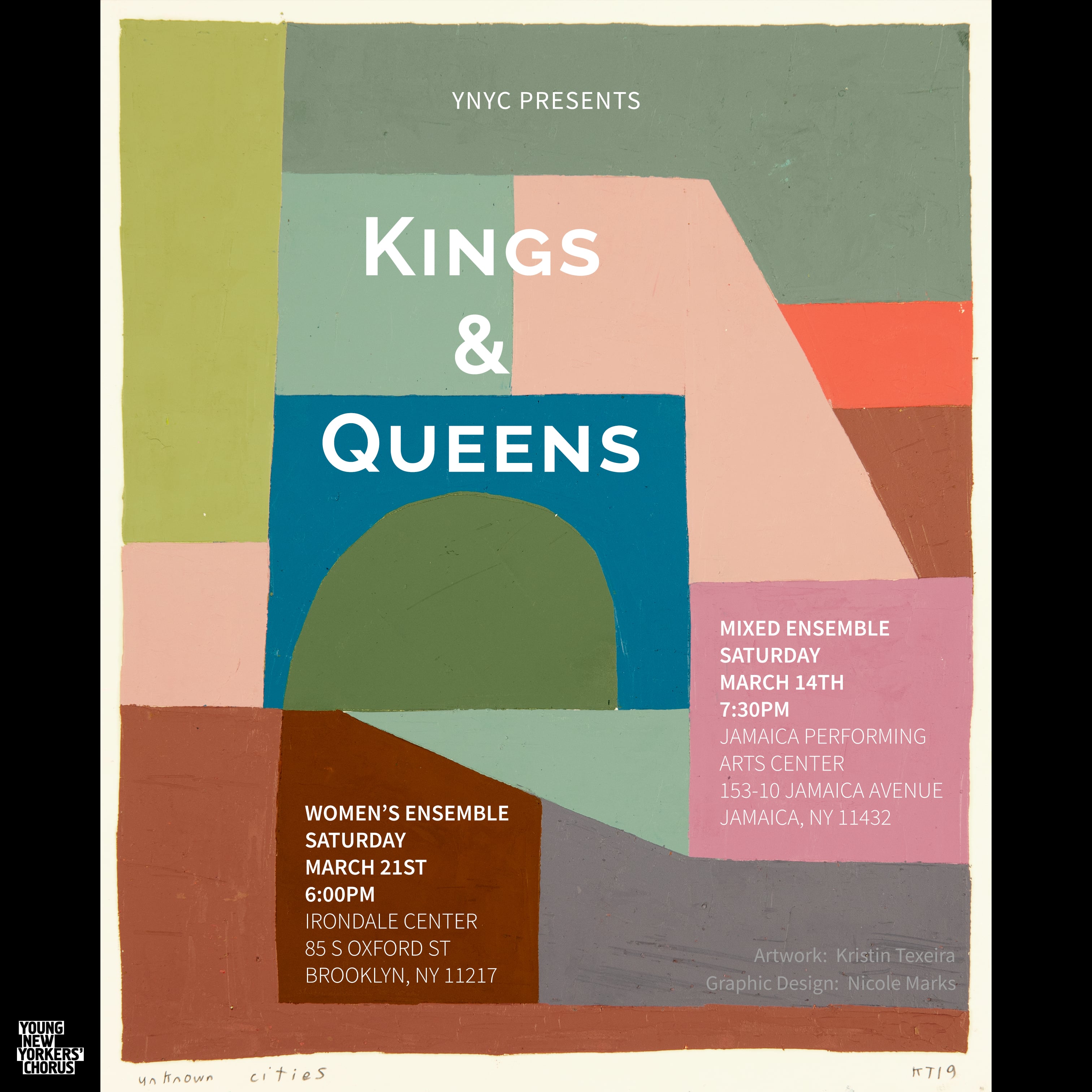 Join the Young New Yorkers’ Chorus (YNYC.org) for the spring concert series of their season, Metropolis, themed around “Home,” Saturday, March 14th, at 7:30 pm in Queens, and Saturday, March 21st, at 6:00 pm in Brooklyn.

This season, the Young New Yorkers’ Chorus (YNYC) explores what it means to call New York City home. Each concert will take place in a different borough of the city, featuring composers from that borough.

The Mixed Ensemble, a co-ed group of about 75 singers, launches this engaging repertoire on Saturday, March 14th, at 7:30 pm at the Jamaica Performing Arts Center. The Kings & Queens Night 1 performance will explore Queens, the most culturally and linguistically diverse place on earth, through song. The Mixed Ensemble will perform works by Chen Yi, H.T. Burleigh, and Aaron Copland and premiere two pieces by Queens-based composers Paul Doust and Rachel DeVore Fogarty. Night 1 will be a concert celebrating what makes us unique, as well as what bonds humanity.

Kings & Queens Night 2 will feature YNYC’s Women’s Ensemble, a group of around 50 women, exploring what it means to be and feel at home. As the closing concert of The Irondale Center’s On Women Festival 2020, http://irondale.org/on-women-festival/ the ensemble will perform works by Missy Mazzoli, Sarah Kirkland Snider, and Aaron Copland and a new “Reinvention” of Kate Bush’s This Woman’s Work by Paul Doust. Each piece seeks to tackle the great mystery of finding home, whether in a physical place, in a state of mind, or in others.

Our city goes by many names – The Big Apple, The City that Never Sleeps, Gotham. The Young New Yorkers’ Chorus knows it by another name – home. Join YNYC (ynyc.org) for their 2019-2020 season, Metropolis, as they sing works composed in each of the five boroughs, in each of the five boroughs, while also celebrating the dynamic musical communities that have been built here throughout the years. Tickets are available for purchase online for $20 or at the door for $25.

The season’s closing concerts are “Stories of the Bronx,” featuring the Women’s Ensemble in the most stylistically diverse concert of the season. The performance will explore the identity of the northernmost borough through both well-known and non-traditional repertoire. It’ll take place Saturday, May 30th, at 6:00 pm at the Church of the Mediator.

The Mixed Ensemble will launch us into summer at their concert “Young in New York.” What better time to be young in New York than in the summer? Enjoy pieces exploring jobs, dating, and apartment issues, among plenty of other themes. This concert will feature pieces written by YNYC’s Competition for Young Composers finalists, Whitacre, Queen, and the premiere of a piece composed by Rex Isenberg with texts written by members of YNYC.

Since 2001, the Young New Yorkers’ Chorus (YNYC) has brought together the finest choral musicians from the tens of thousands of young people who flock to the city for its excitement, art, and culture. As a post-collegiate community choir, YNYC has the unique pleasure of performing for a large and devoted youthful audience, exposing the demographic to the beauty and transcendent potential of the choral arts.

Guided by the artistic vision of Artistic Director Alex Canovas, the choir performs a vast variety of music, from works by classical greats to those of prominent living composers, in venues including Avery Fisher Hall, Merkin Hall, Symphony Space, The Knitting Factory, Brooklyn Fire Proof, Chicago Symphony Center, and many of the finest churches in New York City. In 2011, YNYC performed at the American Choral Directors’ National Convention in Chicago. YNYC has collaborated with visual artists Eyebodega and Marco Brambilla and composers including Caroline Shaw, Christopher Cerrone, Mohammed Fairouz, and Shara Worden, and they recently performed at the Brooklyn I=U Festival.