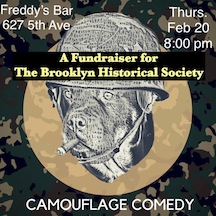 SOUTH SLOPE, BK - Popular comedy show Camouflage is inviting a slew of top comedians to raise money for the Brooklyn Historical Society on February 20th at 8:30 at Freddy’s Bar in South Slope. Hosts Lucas Connolly, Danny Vega, and Ronnie Fleming are raising money for the organization in lieu of an upcoming podcast (The GOAT), that requires research of historical figures and is scheduled to be released at a later date. “We figured we’d put some good karma out there,” Fleming says.

Tickets are free but there is a

Reserve your seat at:

Camouflage: A Comedy Show is one of the best monthly shows in NYC, according to the New York Times and Time Out New York. Our show has featured acts including Janeane Garofalo, Nikki Glaser, Daily Show Correspondent Roy Wood Jr., Impractical Joker's Sal Vulcano, SNL's Chris Redd, as well as countless others from Comedy Central, Late Night and beyond.