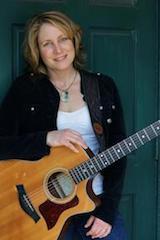 Nationally-renowned folk rocker Meghan Cary has announced that she will be performing a special show at First Acoustics House Concerts in Brooklyn (location to be disclosed upon purchase of tickets) on Saturday, November 23 as part of her “Gratitude Gatherings” series of shows. Dedicating her Thanksgiving holiday to showing her appreciation for the fans and community that have supported her with this exclusive performance, Cary is inviting guests to join her in a celebration of giving thanks through music and song.

Cary, whose latest album Sing Louder debuted among the top 10 on the US / International Folk DJ Radio Charts and is being played at mainstream radio in more than 40 markets throughout the country and in Canada, will be joined by multi-instrumentalist, Peter Farrell, to perform songs from the record as well as fan favorites. Known for her masterful storytelling and award-winning songs, Cary engages audiences on a powerfully personal level, inviting them into and leading them through an experience that has been called healing, inspiring and outrageously joyful. Her message of unity and the power of raising our voices together infuses every show, and her song, “Sing Louder”, has become an anthem for the music-loving community.

“I’m so grateful for all the love and support I receive from the community,” said Cary. “I’m hosting these shows to thank - live and in person - all the folks who show up at concerts with hearts open wide ready to take the ride. I’m especially excited to share the house concert experience with anyone who has never been to one. Best way ever to experience live acoustic music!”

Co-headlining the show with Cary is Brooklyn Resident Barry Oreck. A career artist, Oreck has played solo and with various bands throughout the years as well as written music and created sound and text scores for dance and theater pieces. His music spans many themes including new and traditional music and protest songs as well as a variety of genres like blues, bluegrass and folk.

First Acoustics is an independent, not-for-profit organization based in Brooklynthat was formed to raise public awareness of acoustic music, be it contemporary, folk or roots music, in Brooklyn and beyond through its intimate house concerts.

Doors open for the Meghan Cary and Barry Oreck show at 6:30 PM for an optional complimentary dinner and music begins at 7:30 PM. Tickets are $25 and are available in advance only by visiting: http://www.firstacoustics.org. Address and details will be provided upon the purchase of tickets.