Jake Dobkin of Gothamist has a book of advice out (read our interview here) and offered to share his thoughts on the topic that has been driving Brooklyn residents mad over at least the last decade, more likely – much longer – gentrification. Enjoy, and get the book – Ask A Native New Yorker if you want more.

I moved to Bed-Stuy a year ago, and I love it—it’s a beautiful neighborhood with old brownstones, a great mix of young people and old-timers, and my apartment is only eight blocks from the C train.

Some new restaurants and coffee shops have opened recently on the avenues, and some weekends I don’t even leave the neighborhood because everything I need is here. So, on Monday when I was walking to the train, I saw a big GENTRIFIERS GO HOME! tag painted across one of the stores’ roll-down gates. I felt really bad and angry, because even though I’m young and white and probably have a little more money than the people who have lived here a long time, and could therefore be considered a gentrifier, I feel like this IS my home. Am I not improving things by being a good neighbor and spending my money locally? Don’t I have a right to live here too?

You certainly have a right to live anywhere in the city you want, and you do seem to genuinely love your new community and want to understand and contribute to it. That’s a good attitude, because not all new arrivals are as thoughtful as you are—some don’t think about the feelings of the longtime residents at all, and some actively dislike anything old and ungentrified: the dusty bodegas, the raucous stoop parties, the run-down buildings that haven’t yet been flipped.

Understanding gentrification takes more than a good attitude, however. First, try to stand in the shoes of the kid who wrote that graffiti and ask yourself why he wants people like you to get out. I’d wager the source of his anger is actually fear: The fear afflicting all natives: that after suffering and surviving through the bad old days, a wave of new, rich arrivals will swamp the neighborhood, drive up the rents, and force them, their family, and all of their friends to disperse further out in Brooklyn, or maybe out of the city all together. Imagine how you’d feel in that situation—powerless and upset and eager to send an unambiguous message to the newcomers.

You might be thinking, “But haven’t I, and all the other gentrifiers, brought money and new amenities to a neighborhood that had been deteriorating, neglected by the city government for years?” Yes, you have; you’ve also probably made the neighborhood safer, because wealthier people are better at getting the attention of politicians and the NYPD; they’re also better at getting resources like more foot patrols assigned. These are all good things, except that the locals don’t feel like any of it is “for them”—they feel like those new shops and eateries are too expensive to patronize, and they may even feel unwelcome inside because of how they look or how they’re dressed. And while they might appreciate a safer neighborhood, they also might feel that when a white person is a victim, the police react like it’s a major emergency, but when it’s a black or Hispanic person, not so much.

So, to the old timers, you have an anxious situation being overshadowed by a very specific, urgent threat: rising rents. Two-thirds of New Yorkers rent their apartments, and, while half of all renters are protected by some kind of rent stabilization or rent control, everyone here knows what happens when a neighborhood starts to undergo gentrification: The landlords jack up the rent on everyone who isn’t stabilized and force them out immediately, and then they use intimidation (constant construction or no repairs at all, physical threats, spurious legal action, etc.) to get rid of everyone else. If it’s a really hot market, they might even offer cash buyouts to get the last tenants to leave—but by that point the money is usually not enough to relocate anywhere nearby.

Rents aren’t the only costs that go up. As bodegas close and get replaced by higher-end supermarkets, the price of food increases, too. Even at the stores that remain, prices may increase as storekeepers recognize they now have a population of residents who can pay more, or they see their own commercial rent jacked up by their landlords and have to raise prices to compensate. This can also affect neighborhood institutions — the old social clubs, bars, storefront churches, and so on — that may find their rents raised so much that they also have to relocate or close.

(An interesting complication is that there is a small group of longtime residents who might actually welcome your arrival: older homeowners. If you bought your Bed-Stuy brownstone for $15,000 in 1960, and are ready to retire, you can sell it now for a million or two. Of course, that will require you to move, which you may not want to do, especially if you have children or grandchildren living in the house with you. If you want to stay, then you’re basically in the same boat as the renters: You have paper wealth that you can’t tap, and you have the unhappy experience of seeing prices rise and friends and relatives displaced.)

Now, you, of course, bear very little responsibility for any of this. You’re just one person, and you moved to the neighborhood for the same reason everyone else did, because it was affordable to you. In fact, you may have been pushed out of a different neighborhood—say Williamsburg, or the East Village—by the exact same forces that are now impacting your Bed-Stuy neighbors. This is what powers the gentrification cycle: regular people looking for more affordable housing. Usually artists lead the way, because they have the least money and need space to do their work, but they’re soon followed by young people on similarly tight budgets, and soon after that, the floodgates open as developers see dollar signs and start aggressively marketing the neighborhood. Sometimes the developers even catalyze this process by recruiting the initial batch of artists and offering them cheap rent (for a time).

The only way to end this cycle of gentrification is to build affordable housing in every neighborhood, and so far, the city and state politicians have not shown a willingness to do that. This is because their biggest donors are the very same real-estate developers who benefit most from gentrification. In the absence of such a building program, gentrification will continue to proceed along the subway lines until it reaches the far edges of the city. The next neighborhood over from Bed-Stuy is already being prepared: East New York. And if Brooklyn is ever totally tapped out, there are parts of Queens and the Bronx that can still be converted.

Do the locals have a right to take their gentrification anger out on you? No, because there is no one in the city who can say they, or their ancestors, have not participated in this process. Take my family: They arrived with the wave of Jews fleeing Russian pogroms around 1900, and after a decade or two in the ghettos of the Lower East Side, they moved uptown and into the Bronx. Their arrival displaced poorer, older waves of immigrants, just as my parents and their friends, two generations later, displaced the working-class Irish and black people who occupied Park Slope in the 1960s and early 1970s. I probably contributed to the gentrification of Chinatown and the South Village by renting apartments there when the areas were still largely inhabited by poorer Chinese and Italian enclaves.

Even if your ancestors go all the way back to the first Dutch settlers, you’re part of this gentrification cycle. Think of the local Lenape Indians who were forced out of their historical hunting grounds by new arrivals looking for a place to live. I find this historical perspective consoling; it means that no one can honestly point a finger and say, “This all started when you arrived here!” Not even the residents of Bed-Stuy, who arrived in the 1930s replacing the Jews and Italians who had previously lived there, and who were beginning to move to the newly created suburbs.

If gentrification is unstoppable, and we are all participants in it in some way, what is to be done? For new arrivals, like you, a good first step would be trying to get to know your neighbors—all of your neighbors. Smile and say hello to everyone on the block as often as you can. Try to patronize all of the old stores; that cold hard cash you bring to the neighborhood shouldn’t all go to overpriced coffee shops. Finally, band together politically with neighbors when you share common concerns. This could be speaking up for better policing at the community board meeting or coming together with the rent-stabilized tenants in your building to oppose landlord harassment. You’ll still be a gentrifier, but you’ll be the most positive, thoughtful gentrifier you can be.

We natives should try to do likewise. Instead of directing our fury at the new youngsters in the neighborhood, we should turn it on the true causes of our misery: the developers and the politicians they control.

Demanding more affordable housing and voting for local officials who promise to require developers to include it in all new buildings is a much more effective response than spray painting anti-gentrification graffiti on roll-down gates.

This is a lot to ask, I know, from both sides, but if we want to have livable, diverse neighborhoods, we’ve got to do it. Remember: Today’s gentrifiers will be tomorrow’s gentrified, so you might as well get the process of understanding and reconciliation started now.

You can get more advice here: 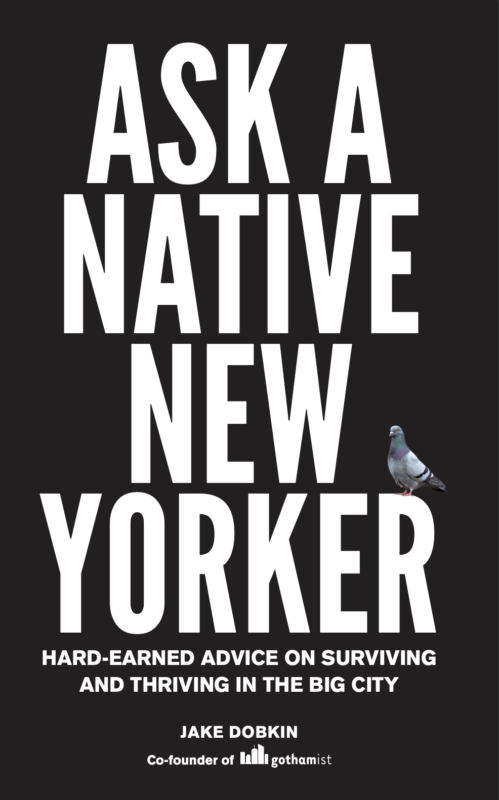