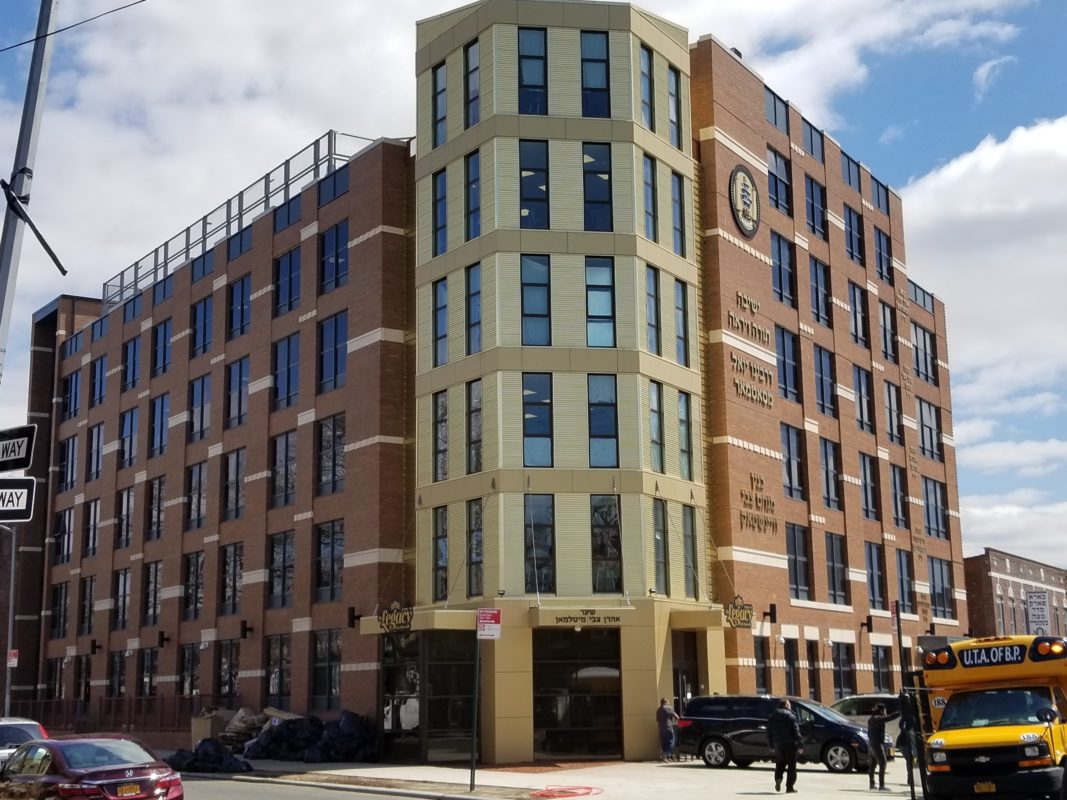 KENSINGTON/BORO PARK – Last Thursday night about 40 residents finally gathered at a meeting with the Clara Street School that they had been asking for for 9 months, hoping to address issues of idling school buses, garbage, noisy generators, and constant evening events at the school.

The clash is the latest in an escalating series of battles between the booming Orthodox community and their neighbors over community institutions that have been springing up at the edges of Boro Park.

The school at the center of the latest fight is the United Talmudical Academy at 123 Clara Street – a religious school for orthodox Jewish boys. It has been in the works since 2002, when it secured a variance to build above 4 stories, but work did not began until 2013, due to funding difficulties, YIMBY reported at the time:

“The five-story structure will feature a synagogue on the first floor, a mix of offices and classrooms on the upper stories, and a play area and ‘multipurpose room’ on the top floor. There will also be a kitchen and dining room in the cellar and roof decks on the fourth and fifth floors. The main part of the building will have five stories, but a sixth, partially setback floor will add extra recreational and roof space.”

The school finally opened last fall, immediately bringing forth a number of issues, that even though they were brought to the attention of Community Board 12 monthly, were never addressed by the school or the board, including failing to meet with the residents for months.

But Assembly Member Robert Carroll finally forced the issue. So when the Community Board 12 Chairman Yidel Perlstein opened the evening it was off to a tense set of exchanges that lasted over and hour and half.  District Manager for CB12 Barry Spitzer was present, and Rabbi Wells represented the School.  Dan Campanelli represented Assemblyman Carroll’s office.

Neighbors came with a list of grievances, and after an hour of the school dodging even common sense suggestions, Dan Campanelli of Assemblyman Carroll’s office had had enough:

“It is very clear what the issues are and folks have been complaining about these issues to Assemblyman Carroll’s office for months, and they are at their wits end. It’s time for us to come up with some solutions that will allow for the neighbors to feel like they are being paid attention to. And so, we have the bus idling situation, that has been happening for months.

“She just presented a potential route change that folks agreed could potentially alleviate the situation at Clara street. We need to commit to trying that and we need to set up a follow up meeting within the next two weeks and present that as a solution. The trash. We know about the trash. We have been hearing about the trash for months .. dumpster – that’s all we are talking about – getting trash in a place where it does not stink to where people don’t feel like they are living in a trash heap. And then we have to make sure that the trash pickup happens. Every day trash has to be picked up. In two weeks we need to have that solved, when we do our follow up meeting. And as far as the permits go – let’s work with the community. Lets make sure we show them respect. … its good that people had a chance to express themselves tonight, but many of them have been doing it for months.”

Perlstein immediately extended that to 3 weeks, so a meeting is expected to take place sometime during the 3rd week of June. 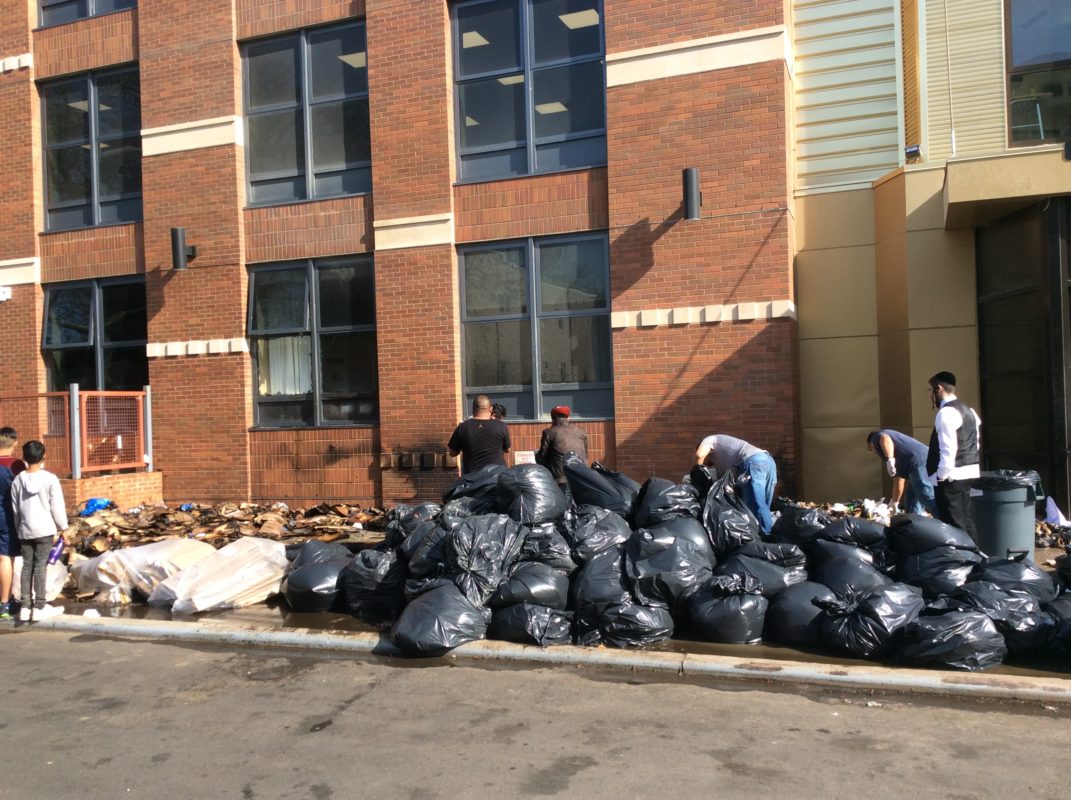 The school stores garbage on the Clara street side of the building (it is on the corner of one way residential Clara Street and the mostly commercial 36th Street). The school generates a lot of garbage, especially since the facility also has a wedding hall that that hosts community events at night. The night of the meeting there was a wedding being celebrated in the basement. 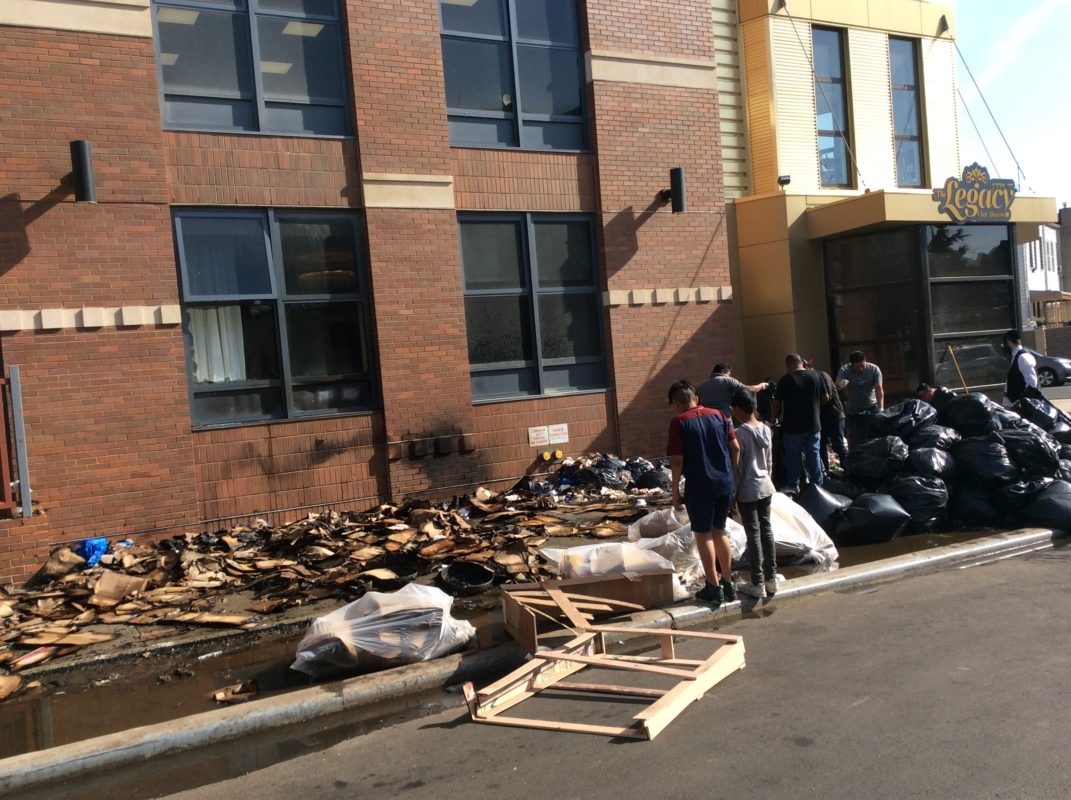 The garbage often does not get bagged properly and does not get picked up daily, reeking all over the neighborhood, neighbors said at the meeting. The school being few short blocks from the Greenwood Cemetery, there are raccoons and other wildlife having a feast, they added.  Then there are those days when recycling burns and endangers the neighborhood, as the pictures above illustrate. 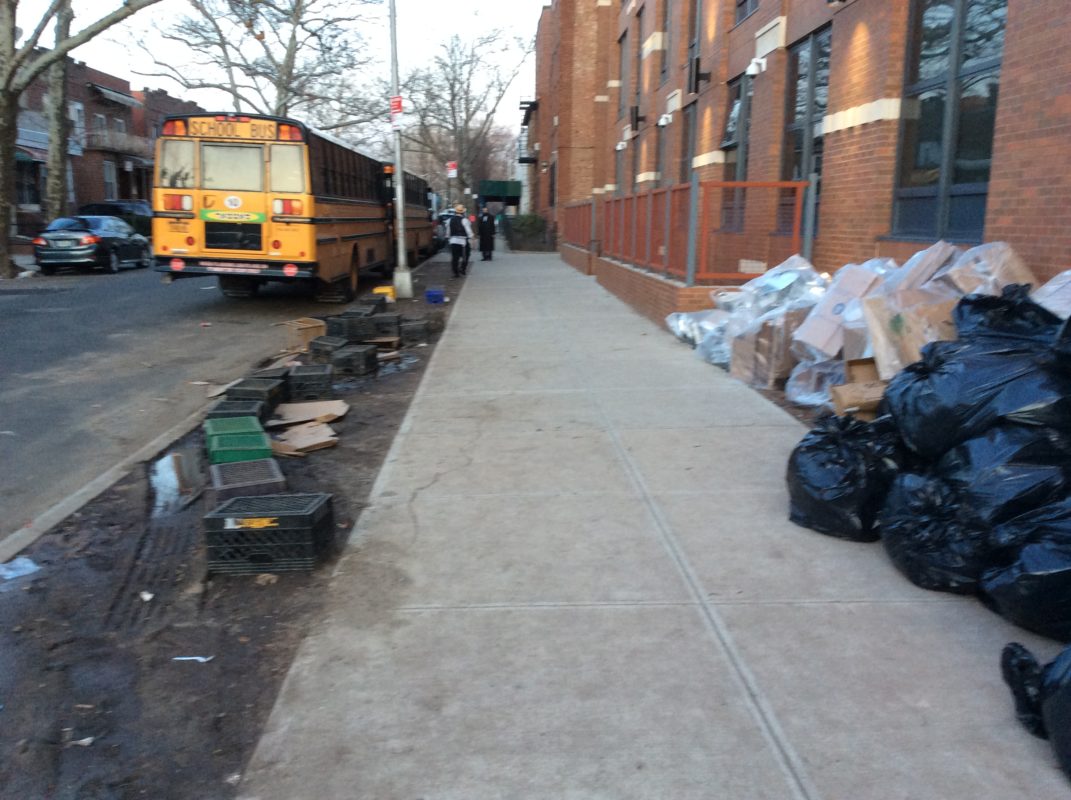 “Is this a school or community center?” a neighbor asked at the meeting.

As an english speaker, one would not know what this building was from the signage on the building. Neighbors were also upset over the fact that there was no notice to the community about this facility coming into the community. Or the incredibly nominal notice that was given about the new school that just got a variance to build an 8 story school a block away.  Community Board 12 has no website, even though $12,000 were allocated to build one 7 years ago, former CB member Maggie Tobin noted.

While billed as a school, the building also contains a synagogue and a wedding hall, that was being renovated after the school opened last fall: 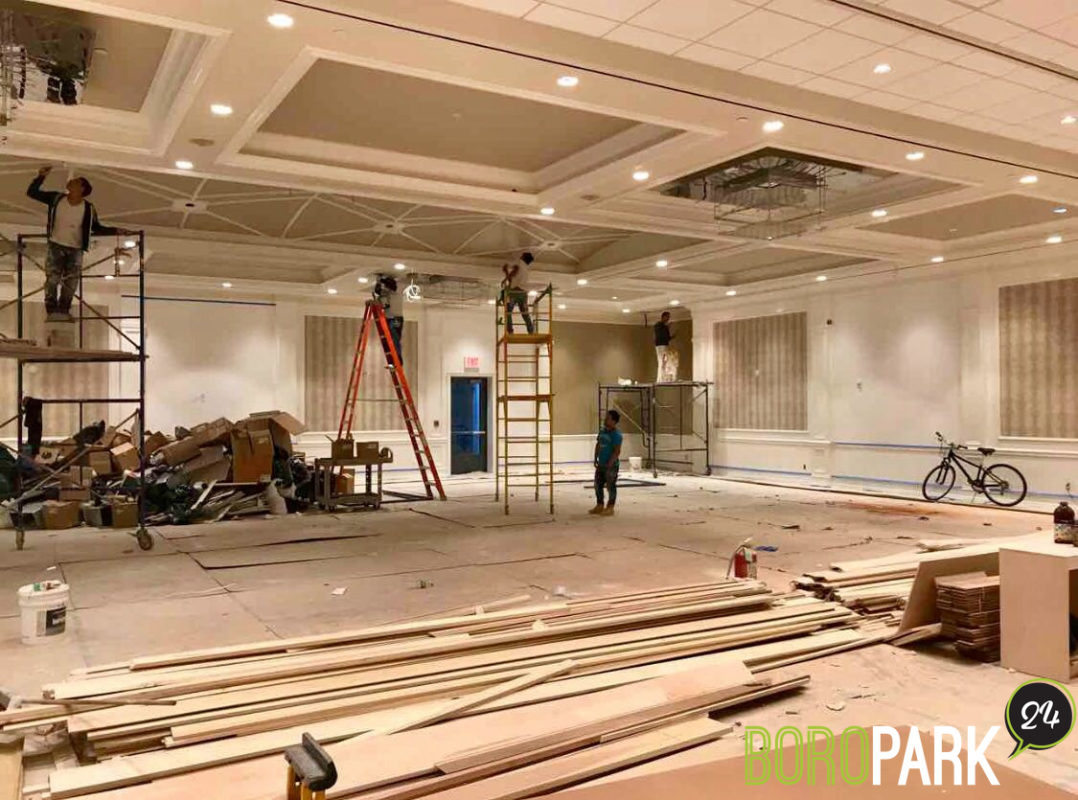 Rabbi Wells confirmed that the school has no website, and he did not provide any information about how many children attend it, despite repeated requests by a number of neighbors at the meeting hoping to assist with dismissal.

There is no calendar of events posted or available anywhere that is publicly accessible, and permits and licenses to operate events and have liquor were not available to be provided to the community. This provoked a heated exchange. Rabbi Wells assured they had a permit – “its not per event, its one general permit”, but residents were not satisfied and requested to see it to believe it.  Many residents complained there were parties every night and parking was nonexistent because of so many people driving in for events.

No promises were made on when the permits will be made available for inspection, frustrating many neighbors.

Vehicles park on the sidewalks at all times of day, and a neighbor questioned if using yellow school busses to make deliveries to the school was legal. The bus company seemed to think it was just a vehicle, and countered – “can you transport goods in your car?” 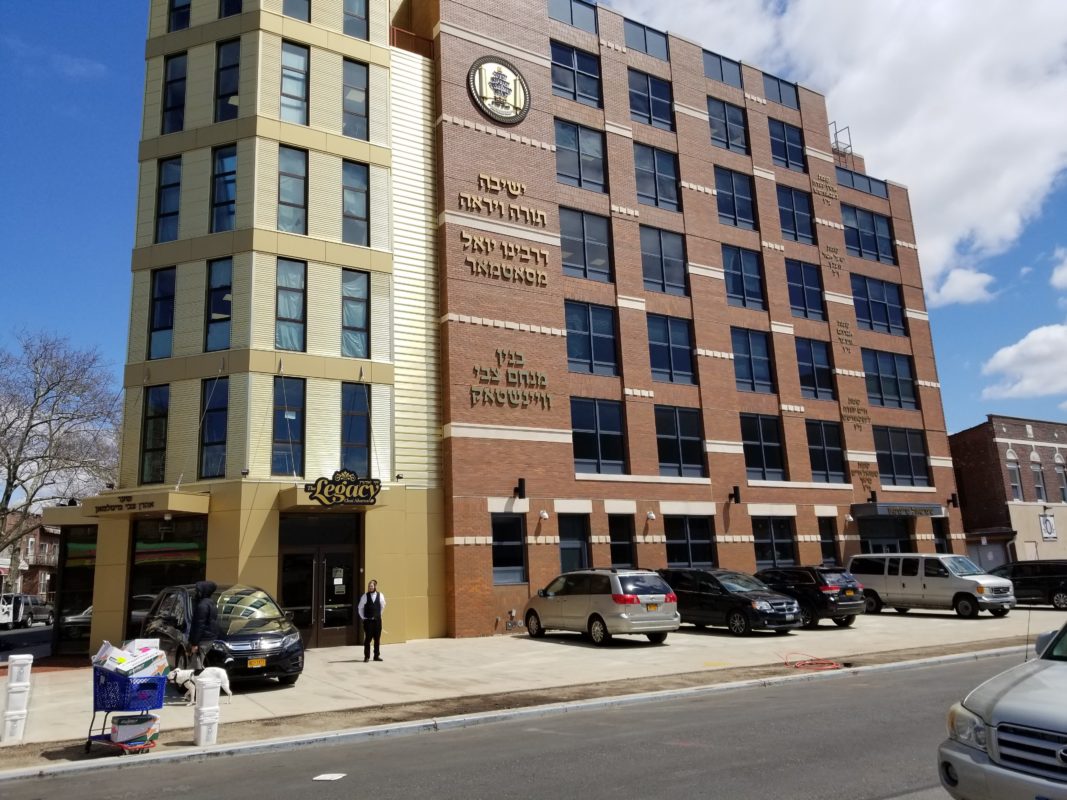 During the day, Sunday through Friday, 15 school busses pull up in the morning to unload kids, and 15 school busses wait for them to board in the afternoon, bringing gridlock to the small one-way street community as all of them pick kids up on the Clara street.

The children are not supervised during these times, neighbors have observed them running among busses and cars up and down the blocks:

This video shows the buses departing at the end of the school day:

A neighbor who was stuck in an ambulance for close to 30 minutes was quite vocal – it is a safety issue for anyone with health concerns. The manager for buses was not sure how many children were being picked up daily, but said dismissal takes 8-10 minutes. Neighbors said the busses block the streets for much longer. Rabbi Wells said that he will look into feasibility of staggered dismissal. 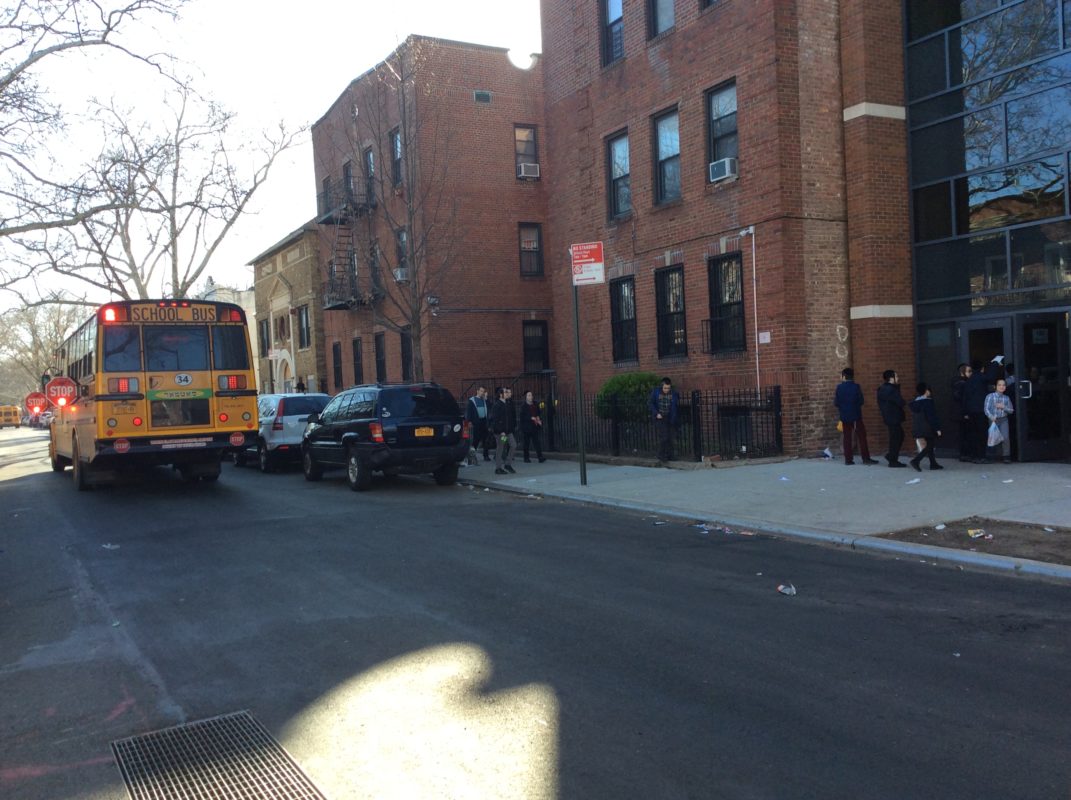 Ventilation system is incredibly noisy, and following a number of complaints, Department of Environmental Protection issued violations for the nose that has been driving the neighbors mad for almost nine months.

The above audio clip is the baseline sound in apartments for the entire winter. A high school teacher who lives behind the school and has not been able to get a good night’s sleep this winter said that the fix seemed quite simple – to enclose the equipment on the roof to muffle the sound. Since the noise stopped with the warmer weather, she said that it was most likely the heating system that needed addressing and that now would be the time to do that, before the fall.

In the end, it seemed neighbors were hoping for common sense solutions that do not cost much if anything – like moving the garbage to the commercial street – and a bit of respect for the surrounding community.

The next morning, the Assembly Member emailed saying that:

“My office has been working with constituents about important quality of life issues related to this location for months now.  From idling buses on Clara Street to inconsistent trash pickup and excessive noise.  While we appreciate that school leadership and the Community Board held a public meeting last night to give residents a chance to reiterate their concerns, it is critical that we work together now to get results for the neighbors. My office will continue to do all that we can to alleviate some of these issues and we’re hopeful that all parties involved will be cooperative on that endeavor.”